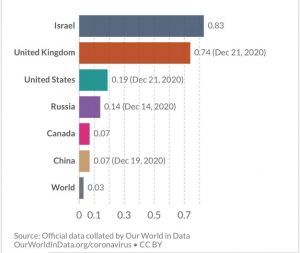 Israel is so far the fastest country in inoculating its population against the coronavirus, according to data released Wednesday.

Our World in Data, a global aggregated database on COVID-19, presented a comprehensive picture of the state of COVID-19 inoculations around the world.

The global average is currently 0.03.

A total of 2.41 million doses have been administered around the world, the majority in China with some one million doses.

Close to 100,000 Israelis have received the Pfizer-developed vaccine in the first few days of Operation “Lend a Shoulder” to inoculate the population.

“Within a week or two, we’ll begin vaccinating the younger population, those under 60,” he said.

The government hopes that some two million Israelis will be inoculated by the end of January.