“Besides for getting tested in order to help our neighborhood get out of the Red Zone and alleviate the pressure on the yeshivos and shuls, it is also vitally important for us to patronize the local retailers, because they have been hurting so much. After struggling for months, they now are faced with crushing restrictions which can destroy whatever is left of their businesses which they worked a lifetime to build, and it behooves us as their neighbors to help them as much as possible,” the Rav of my shul said on Shabbos morning before he commenced his weekly drashah.

Similar messages were delivered in shuls throughout Flatbush, part of the efforts of the Flatbush Jewish Community Coalition (FJCC) to raise awareness of the plight of the storekeepers who are struggling under the recent implementation of COVID-related restrictions.

“Our focus right now is to push the concept to buy local,” said Josh Mehlman, chairman of the FJCC. “The proprietors need encouragement, as they have grown despondent, and many are forced to lay off their workers just to stay afloat. The lockdowns had a terrible effect on the businesses, and they need a tremendous amount of backing from the community to survive.” 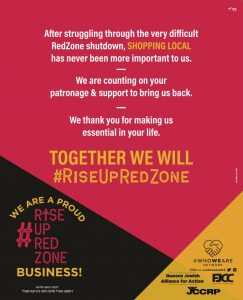 “The FJCC has flooded the Flatbush community with this message via emails, local shuls, posters and advertisements. We had a meeting which was attended by many of our Rabbanim. They understood that a vibrant shopping district is needed to keep the neighborhood healthy, and they need immediate relief. We are grateful that the Rabbanim took such an active role in helping spread the message in their respective kehillos.

“Baruch Hashem, we are beginning to see some positive results. People are coming back, and even the ‘drop in’ food stores, such as coffee shops and ice cream stores, have seen an improvement as pedestrians are once again visiting the nearby stores and are dropping in to make their purchases. We hope to keep this up through the Chanukah season, which, with Hashem’s help, will go a long way to alleviating the situation,” Josh told Hamodia.

“The store owners are literally crying as they watch their businesses and hard work go down in ruins,” said Sorolle Idels, a community activist living and working in Kew Garden Hills. “I’m a Queens resident my entire life, and I am co-founder of the Queens Jewish Alliance for Action, a group which works to bridge the various segments of the local community, where I serve as a volunteer activist for community issues. I could not stop thinking of how we must help save these neighborhood businesses. Residents were not going out to shop because of COVID, and when the Red Zone restrictions set in, the storekeepers were crushed. I realized that without these stores, we will quickly become a desert.” 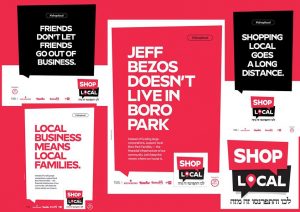 Her Queens neighborhood was hit hard by the recent color coding set in place by Governor Cuomo. “The Queens Jewish community is not as large as say Boro Park, Flatbush, Williamsburg or Crown Heights. The stores were ordered closed, and were restricted to curbside pickups. The businesses were flooded with inspectors who were all too eager to issue citations without regard to how this was killing their businesses. Even our yeshivos, who were located in Yellow Zones, were getting citations, and had to spend valuable time getting it straightened out. There was a cry for help, and we heard it loud and clear.”

Sorolle has community activism in her blood, and when speaking to her brother, Mr. Chatzkel Bennett of Flatbush, he told her of the Rise Up Red Zone initiative, the Flatbush Jewish Community Coalition’s “Shop Local” project. “I told him that we must bring this to Queens as well, and he sent me over whatever material he had. It is not a matter of supporting Flatbush merchants or Queens merchants, but rather ensuring that local businesses can function and remain open, which will help all our neighborhoods thrive.” 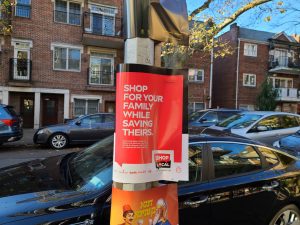 Before long, signs were printed, and Sorolle marched up and down the business district with Mr. Daniel Rosenthal, who represents the 24th district in the New York State Assembly, with Mr. Rosenthal handing out gloves and hand sanitizer while she gave the owners signs for their display windows.

The next neighborhood tackled was Forest Hills and Kew Gardens, and she was accompanied by Avi Cyperstein, who is running for City Council in District 29. “In some areas, one side of the street was Red and the other was Yellow, and they watched as even their loyal customers crossed over to shop in the other zone. In addition, all proprietors were petrified that more lockdowns were heading their way.”

Besides for the eye-catching signs, Sorolle reached out to friends and neighbors on social media and explained the need to promote the Rise Up Red Zone initiative. “A friend told me she had to purchase a large quantity of sefarim, and she had planned to buy them in another neighborhood in order to save some money. Then she said, ‘I pictured you in my mind’s eye, and I decided to but them right here on Main Street.’” 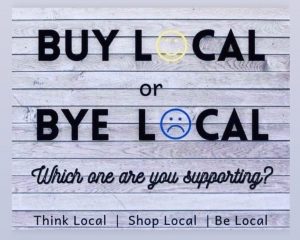 Bringing awareness that to sustain the neighborhood we must keep the stores viable is the main focus of the Queens Jewish Alliance for Action. One of the slogans, “Buy Local or Bye Local,” has been picked up by other organizations as well.

In the past few days, the Queens Jewish Alliance for Action has gathered information from local businesses, and is creating a directory to guide customers to patronize them. “When we called the owners to inform them of the directory, they were hesitant, not knowing how much it would cost. When we told them it was free, they were ever so thankful,” Sorolle related. “We now have it all entered on a spread sheet, and it will soon be posted with a link sent around to all residents. Just knowing there is a place to get a sheitel, or a baby gift, or your taxes taken care of can help both the consumer and give the local establishments the support they need as well.”

In a well-attended meeting at the headquarters of the Boro Park Jewish Community Council (BPJCC) on Tuesday, November 24, CEO Rabbi Avi Greenstein chaired a meeting of local merchants who gathered to discuss plans for establishing a local chamber of commerce to deal with the recent crisis the stores are facing in Boro Park.

“It is an emergency response to an emergency situation that threatens the livelihoods of so many people,” Rabbi Greenstein declared. “Nobody wants to see stores close and nobody wants to see stores lay off workers. These are people who want to support their families. It is not just the store owners, but literally thousands of workers whose parnassah depends on the residents’ support.”

With some of the funding secured for this venture, the new association hopes to garner the support of local politicians. “Our strength must be in our numbers. If we can show them we are united in our efforts, we stand a better chance to be heard,” Rabbi Greenstein declared.

A recent idea presented by Brooklyn Boro President Eric Adams, who is running as a candidate for Mayor next year, is encouraging. “Mr. Adams expressed the desire to enact a 2 to 4 week ‘tax moratorium or holiday’ for the areas that were hard hit by the Red Zone restrictions. This was covered widely in the media, and we were grateful that he pitched this idea,” Rabbi Greenstein told Hamodia.

One of the most exciting proposals for this new organization was to bring in professionals who would train the local store keepers how to compete with the internet sellers. “Amazon is not going away in the foreseeable future, and we have to be informed in the best practices of marketing in this environment,” said Rabbi Greenstein. “We hope to present seminars which will inform our group how to improve their customer service, and reformulate and liberalize their return policies, and which will ‘teach them how to fish rather than giving them a fish.’ In this economy, it’s important to ‘think big,’ and we hope to roll out these ideas in the immediate future.”