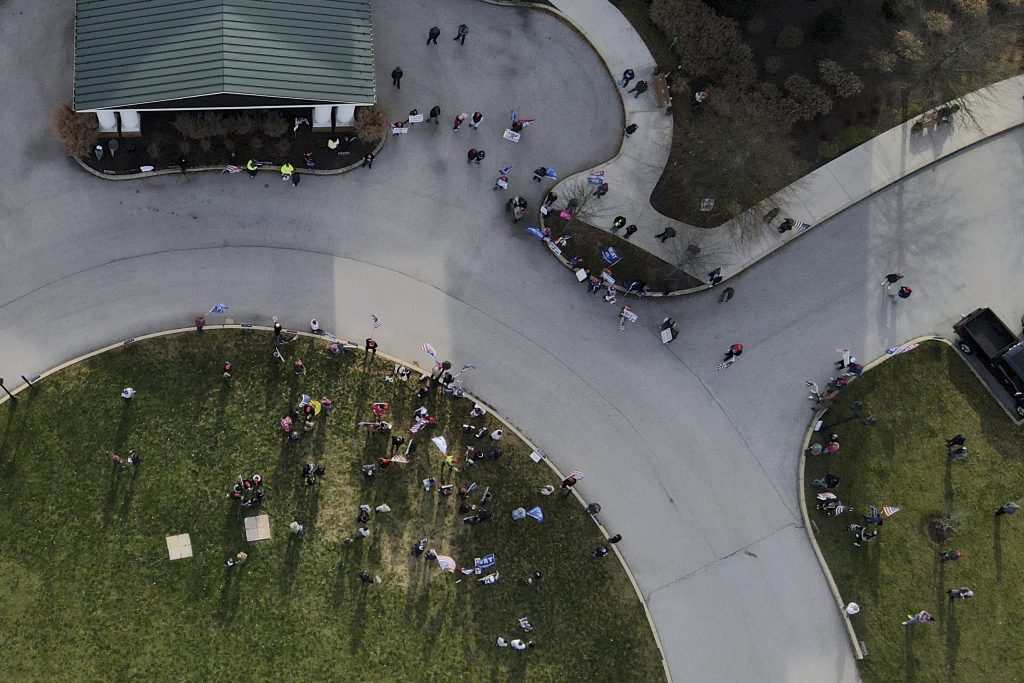 President Donald Trump scrapped plans to travel to Pennsylvania on Wednesday for a meeting of state Republican lawmakers examining accusations of election impropriety.

Trump’s planned visit to Gettysburg for a hearing by the Pennsylvania Senate Majority Policy Committee had not been listed on the president’s public schedule, but people familiar with the matter said he intended to appear alongside Rudy Giuliani, who has been leading a long-shot legal effort in several states to reverse the results of the Nov. 3 election.

No trip was ever put on his public schedule, and a group of reporters assembled to cover a trip were told at the last minute that it had been canceled, according to a press pool report Wednesday — indicating Trump wouldn’t be traveling after all. Trump still has no events on his public schedule Wednesday. The White House declined comment.

In Pennsylvania, where Joe Biden leads by more than 80,000 votes, Trump supporters have complained that observers in Philadelphia were not allowed to be closer to workers counting the ballots, but have failed to present evidence of widespread fraud.

Biden transition spokeswoman Kate Bedingfield dismissed the trip to Gettysburg as a stunt.

“The election is over. Virtually everyone on Earth has accepted that truth except for Donald Trump and Rudy Giuliani,” she said during a call with reporters on Wednesday. “The Trump campaign has been laughed out of every courtroom with their meritless and baseless lawsuits meant to undermine the will of the American people. This is a sideshow.”

Last weekend, a federal judge in Pennsylvania dismissed a lawsuit that Giuliani personally argued after the other attorneys working on the campaign’s lawsuits in the Commonwealth asked to be removed from the case.

Trump’s lawyers presented “strained legal arguments without merit and speculative accusations” that were not supported by evidence, U.S. District Judge Matthew Brann wrote in his opinion dismissing the lawsuit. Giuliani has pledged to appeal.

Still, Trump has publicly struggled to accept his election loss, only this week agreeing to give Biden’s team access to government resources as part of the transition process. And he’s sought to appeal to lawmakers in Republican-controlled state governments to refuse to certify results that show him losing to the former vice president.

Last week, he invited Michigan Senate Majority Leader Mike Shirkey and House Speaker Lee Chatfield, both Republicans, to the White House. But they issued a joint statement after their meeting with Trump saying they had “not yet been made aware of any information that would change the outcome of the election in Michigan.”

Those efforts also fell short in Georgia and Nevada, each of which progressed through the ordinary process of certifying election results. And Pennsylvania Gov. Tom Wolf, a Democrat, announced Tuesday that his state had certified the results and appointed representatives to the Electoral College.

Earlier this week, his campaign distanced himself from lawyer Sidney Powell after she accused Georgia Governor Brian Kemp, a Republican, of having been bribed by an election systems company. Last week, tabloid newspapers and TV hosts mocked Giuliani for holding a news conference during which he perspired so profusely that hair dye appeared to drip down his cheeks.

“It’s in everyone’s interest to have a full vetting of election irregularities and fraud,” Giuliani said in a statement about Wednesday’s event. “And the only way to do this is with public hearings, complete with witnesses, videos, pictures and other evidence of illegalities from the November 3rd election.”

Pennsylvania state Sen. Doug Mastriano said he had requested the public hearing because voters in his state “lost faith in the electoral system.”

“Over the past few weeks, I have heard from thousands of Pennsylvanians regarding issues experienced at the polls, irregularities with the mail-in voting system and concerns whether their vote was counted,” Mastriano said in a statement. “We need to correct these issues to restore faith in our republic.”