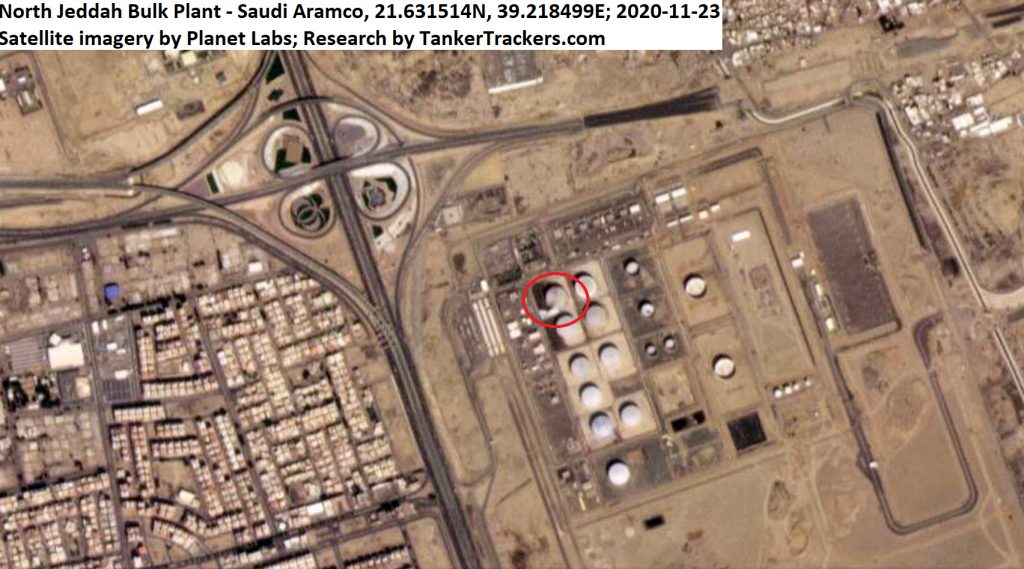 Yemen’s Houthi rebels said they struck a Saudi oil facility in the port city of Jiddah on Monday with a new cruise missile, just hours after the kingdom finished hosting its virtual Group of 20 leaders summit.

An unnamed official at the kingdom’s Ministry of Energy acknowledged the attack in a statement carried by the official Saudi Press Agency late Monday. It came after videos of a small explosion at a Saudi Arabian Oil Co. facility in Jiddah circulated on social media all day. A projectile struck a fuel tank at the Jiddah distribution station and ignited a fire, the official said.

Col. Turki al-Maliki, a spokesman for the Saudi-led coalition fighting the Iran-backed Houthis in Yemen, blamed the Yemeni rebels for what he called “a cowardly attack which not only targets the kingdom, but also targets the nerve center of the world’s energy supply and the security of the global economy.”

Online videos appeared to show a tank farm similar to the bulk plant on fire, with wailing sirens heard and police cars alongside a highway by the facility. Details of the videos posted predawn Monday matched the general layout of the bulk plant. However, passers-by could not see damage to the tank farm from the highway running beside the facility later Monday morning.

A satellite photo from Planet Labs Inc. later published by TankerTrackers.com appeared to show damage to one of the tanks at the bulk plant and what appeared to be fire-suppression foam on the ground near it.

The Saudi energy official said that firefighters had brought the blaze under control and the strike had not resulted in any casualties or damage to oil supplies.

Earlier, the U.S. Consulate in Jiddah said it wasn’t aware of any casualties from the claimed attack. It urged Americans to “review immediate precautions to take in the event of an attack and stay alert in case of additional future attacks.”

Saudi state-run media did not acknowledge the Houthi claim. Saudi Aramco, the kingdom’s oil giant that now has a sliver of its worth traded publicly on the stock market, did not immediately respond to a request for comment. Its stock traded slightly up Monday on Riyadh’s Tadawul stock exchange as crude oil prices remained steady above $40 a barrel.

A Saudi-led coalition has been battling the Houthis since March 2015, months after the rebels seized Yemen’s capital, Sanaa. The war has ground into a stalemate since, with Saudi Arabia facing international criticism for its airstrikes killing civilians.

The Houthis have used Quds missiles to target Saudi Arabia in the past. The Quds-1 has a copy of a small, Czech-made TJ-100 jet engine, with a range of 700 kilometers (435 miles). United Nations experts have said they don’t believe the missiles are built in Yemen and instead have been sold or traded to them in violation of an arms embargo.

Iran uses a copy of TJ-100 engines in its drone program. U.N. experts, Arab countries and the West say Iran supplies arms to the rebels, allegations denied by Tehran.

The Quds-1 was used in a missile-and-drone strike on the heart of the kingdom’s oil industry in 2019 that shook global energy markets. The U.S. believes Iran carried out that attack amid a series of escalating incidents last year between Tehran and Washington, something Tehran denies.