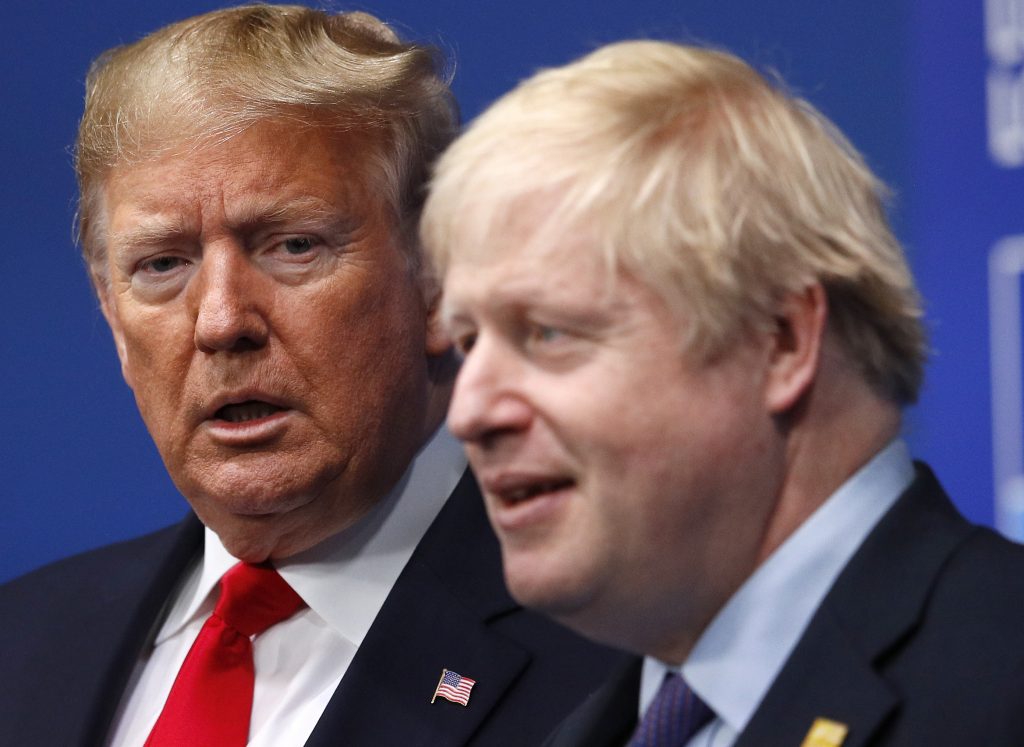 Britain and the United States will work together to support democracy and protect the environment, Prime Minister Boris Johnson said Sunday. He dismissed talk that his close ties to President Donald Trump would cool U.K.-U.S relations once President-elect Joe Biden takes office.

Johnson, who has yet to speak to the president-elect, said the two countries’ “common global perspective” would be vital to shore up a rules-based global order that is under threat.

Johnson told The Associated Press during an interview Sunday at his 10 Downing St. office that he looked forward to “working with President Biden and his team on a lot of crucial stuff for us in the weeks and months ahead: tackling climate change, trade, international security, many, many, many, many, many other issues.”

Conservative Party leader Johnson is widely seen as an ally of Trump, who has referred to Johnson approvingly as “Britain Trump.”

“There is far more that unites the government of this country and government in Washington any time, any stage, than divides us,” he said.

“We have common values. We have common interests. We have a common global perspective. There’s a huge amount of work we need to do together to protect those values: a belief in democracy, in free speech around the world, in human rights, in free trade, in the rules-based international order,” he said.

Johnson shrugged off suggestions that Biden’s victory would scupper chances of a U.K.-U.S. trade deal, and make it more urgent for Britain to secure a post-Brexit free trade deal with the 27-nation EU.

Britain had been hoping to secure a quick trade agreement with the U.S. after its official departure from the EU in January. The change in administration in Washington leaves prospects of a deal uncertain and could raise pressure on Johnson to seal agreement with the EU before the U.K. makes an economic split from the bloc at the end of this year.

Post-Brexit trade talks are due to resume Monday, with the deadline imposed by the two sides just days away.

“I’ve always been a great enthusiast for a trade deal with our European friends and partners,” said Johnson, who has repeatedly said he is prepared to walk away from the Brexit trade talks without an agreement. “I think it’s there to be done. The broad outlines are pretty clear. We just need to get them to do it if we can.”

Johnson said he still hoped to get a U.S. trade deal but knew the Americans would be “tough negotiators.”

“I’ve never believed that this was going to be something that was going to be a complete pushover under any U.S. administration,” Johnson said, adding “I think there’s a good chance we’ll do something.”