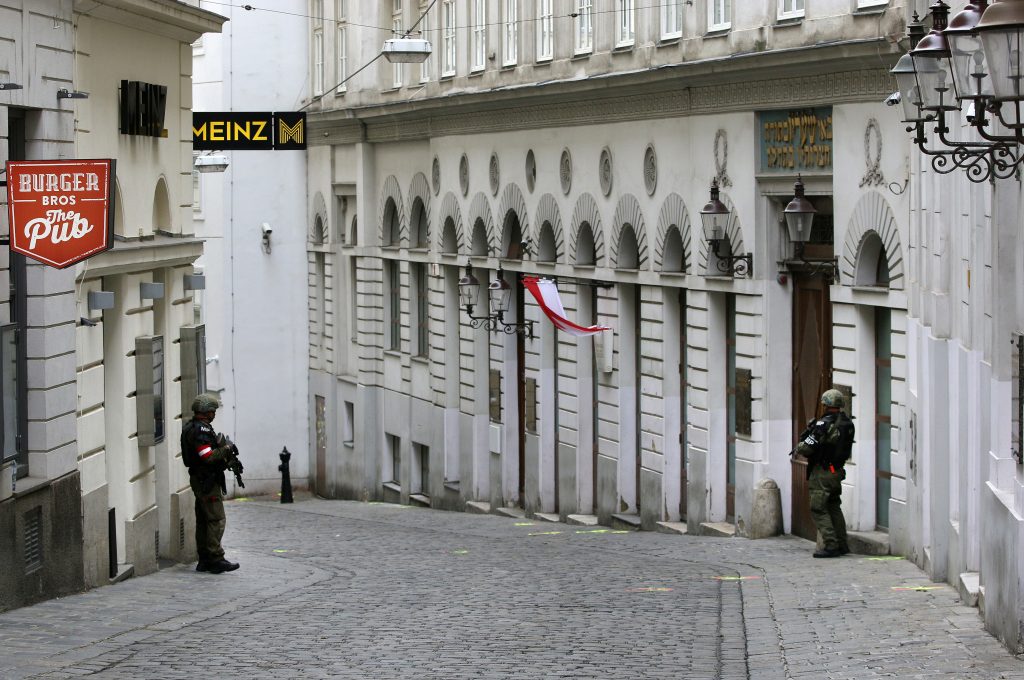 Initial reports on Monday’s deadly shooting in Vienna implied that nearby Jewish institutions may have been the assailant’s target. A day later it had been confirmed that none of the four killed or 22 wounded were members of the city’s Jewish community, but questions about what the gunman, a convicted jihadist, meant to target remained unanswered.

The area chosen by the attacker, 20 year-old Kujtim Fejzulai, is home to Vienna’s Stadttempel, a large and ornate shul that has served as the city’s Great Synagogue since its completion in 1826. It is also the site of one of the city’s kosher restaurants. The other side of the square has several non-Jewish cafes were many of the shooters victims were at the time.

Raimund Fastenbauer, former Secretary General of the Jewish community of Vienna, told Hamodia that while the shooter’s targets remain a mystery, the community remains on high alert.

“People are concerned, but we’ve gotten used to it to a degree,” he said. “I don’t think many parents would be comfortable sending their children to Jewish schools if not for the guards the government provides.”

Vienna’s Jewish community has not been targeted in any recent attacks, and despite a large number of Muslims in Austria with ties to radical causes, the country has been mostly spared the attacks that plagued France and Belgium. Yet, as threats from radicalized Islamic elements in the country increased, the government has provided additional security to Jewish schools and institutions.

Fejzulai was killed the scene. The next day a raid of several locations led to some 14 additional arrests of people suspected of some connection to ISIS-the organization the gunmen had formally been arrested for trying to join and in whose name he carried out the present attack.

As a precaution, on Tuesday, shuls, Jewish schools, and kosher establishments were closed.

“It’s not clear if the gunman intended to attack Jews, but if he did, he made mistakes in his planning as it was already night time and the Great Synagogue was closed. It could very well be that he knew about the cafes and saw that he could kill a lot of people on that street,” said Mr. Fastenbauer. “

If Stadttempel indeed was Fejzulai’s intended target, it would not be the first time it was the scene of a terror attack. In 1981 two attackers affiliated with a Palestinian terrorist organization killed two people and wounded 30 at a bar mitzvah celebration there.

As ISIS’ initial victorys in Iraq and Syria garnered much world attention beginning six years ago, a spate of attackers claiming allegiance to the group stuck several cities in Western and central Europe, though no major such incidents had occurred in recent years. The shooting in Vienna coupled with a series of deadly attacks in France in recent weeks, raised concern of a new wave of Islamacist violence on the continent.

France’s President Emanuel Macron announced a new initiative to crack down on the radicalization of Muslims in his country. In the wake of Monday’s shooting, Austrian Chancellor Sebastian Kurz seemed poised to take similar steps.

In some instances, efforts ostensibly aimed at curbing radicalism in Western Europe have led to more general attacks on religious freedoms with consequences for Jews as well ranging from incursions into education as well as campaigns against religious circumcision and slaughter methods.

Mr. Fastenbauer said that while threats to bris milah and shechitah have needed to be addressed over the years, that stronger action on radical Islamacists was overdue.

“There has been a need to crack down for some time, but now I think the government is actually willing to do it,” he said. “There is always a risk that we could be collateral damage, but we have fought these battels for some time and I am not especially concerned, our schools and institutions are operation according to Austrian law, we are not playing any games that we have to hide.”