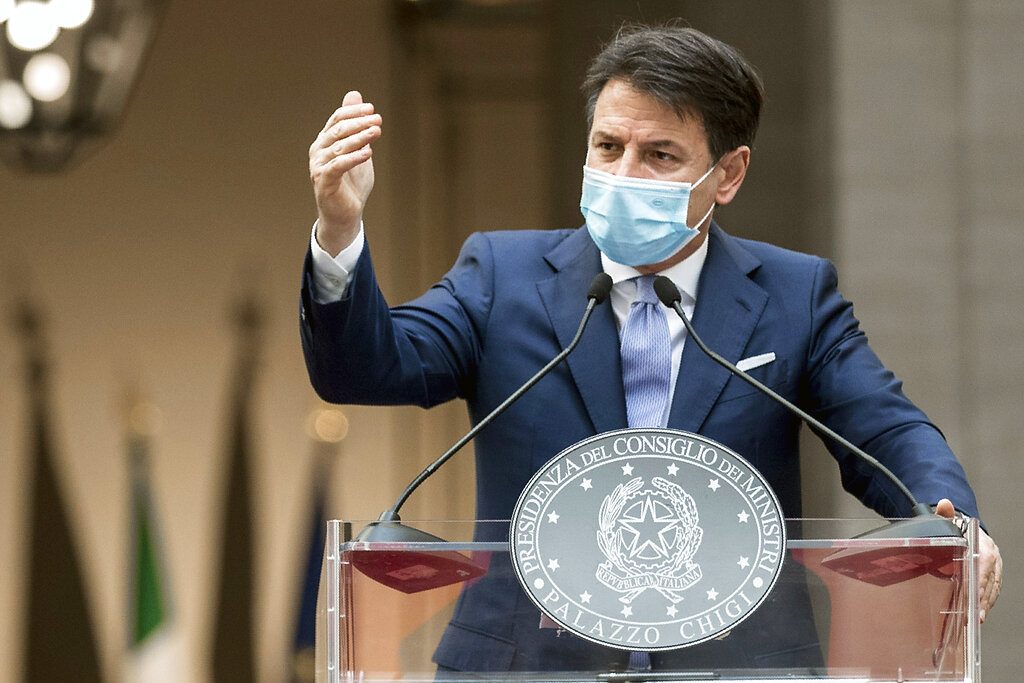 Italy’s leader imposed at least a month of new restrictions across the country Sunday to fight rising coronavirus infections, shutting down gyms, pools and movie theaters, putting an early curfew on cafes and restaurants and mandating that people keep wearing masks outdoors.

Worried about crippling Italy’s stagnant economy, especially after 10 weeks of a severe lockdown earlier in the pandemic, Italian Premier Giuseppe Conte opted against another heavy nationwide lockdown. The new decree goes into effect Monday and lasts until Nov. 24.

“Our aim is to protect health and the economy,” Conte said.

A day earlier, Italy surpassed a half million confirmed coronavirus cases since February, when it became the first country in Europe stricken by the pandemic. The last two days have seen daily new infections creep close to 20,000 and Italy still has Europe’s second-highest virus death toll after Britain, at 37,210 people.

Restaurant and bar owners had lobbied hard against the new measures, which orders them to close at 6 p.m. Most restaurants in Italy usually don’t even start to serve dinner before 8 p.m. Cafes and restaurants were allowed in recent months to re-open for outdoor dining or limited indoor seating. But many are struggling to pay their bills and some have already failed after tourists were banned from the United States and many other countries.

Conte promised financial aid from his center-left government as soon as November to the food sector and noted that cafes and restaurants can do delivery and takeout orders until midnight. But before the curfew, no more than four diners will be allowed per restaurant table, unless they are from the same family.

Under the new rules, ski slopes are off-limits to all but competitive skiers and all spectators are banned from stadiums during professional sports matches, including soccer. Receptions after religious or civil ceremonies like weddings are forbidden. The decree continues to exempt children younger than six and those exercising outdoors from wearing masks.

By early summer, after Italy’s lockdown was all but lifted, new virus caseloads had dropped as low as 200 a day.

“We did it then, we can do it now,” Conte said, warning that without any vaccine available, “it’s not like we’ll all be able to hug each other” during the holidays.

Several Italian regions and cities recently slapped on overnight curfews to cut down on young people congregating outdoors. But Conte said given the approaching cold weather, people would prefer to socialize inside at bars and restaurants instead, so that’s why he ordered them to close early.

On Friday, demonstrators in Naples protested a 11 p.m. to 5 a.m. curfew and clashed with police. On Saturday night, far-right and neo-fascist political groups led a similar protest in Rome against that city’s curfew.

Conte said he understood the frustration of citizens, whose incomes and way of life are being heavily hit by pandemic limitations.

“I’d feel anger, too, toward the government,” he said, but noted that authorities had determined that the protests were also fueled by agitators.

Since early in the pandemic, masks have been required on Italy’s public transit and in indoor venues like supermarkets and other stores.