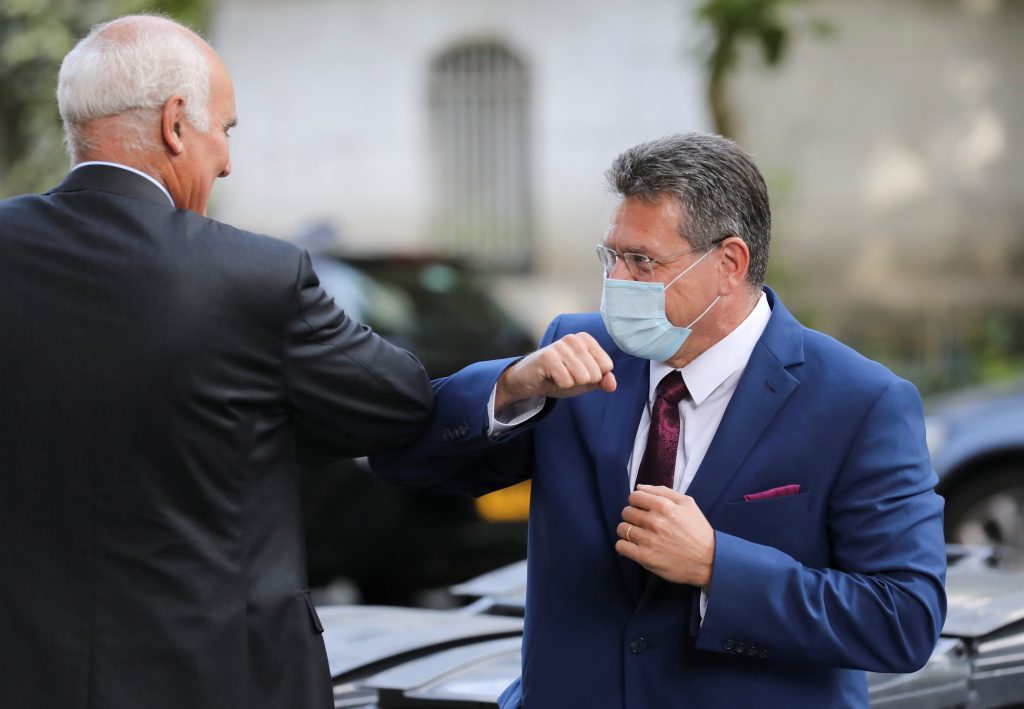 Top European Union and British officials were holding an emergency meeting in London on Thursday over Britain’s plan to break part of the Brexit divorce agreement, a move the EU says would demolish any goodwill to reach a trade agreement.

Britain’s decision to break international law by overwriting part of the EU Withdrawal Agreement has alarmed European leaders and threatens to scuttle the fragile negotiations on future U.K.-EU relations currently being held in the British capital.

Such a move by Prime Minister Boris Johnson’s government “would fundamentally undermine the Withdrawal Agreement and seriously damage trust we have in our British partners,” said Danuta Huebner, the EU parliament’s chief official overseeing the implementation of the EU-U.K. deal.

“This cannot and will not be accepted,” Huebner said.

“I came here to express the serious concerns that the European Union has over the proposed bill,” Sefcovic said as he arrived in London.

Asked if he had lost trust in the British government, he said: “Let’s hear what Michael Gove will tell me this afternoon.”

The two men head a joint committee charged with sorting out post-Brexit rules for Northern Ireland, the only part of the U.K. to share a border with an EU member, Ireland.

Keeping that border free of customs posts and other obstacles is a key aim of the withdrawal agreement signed by the two sides less than a year ago. An open border underpins the peace agreement that ended decades of violence in Northern Ireland.

Huebner warned that undermining the withdrawal agreement “would pose a serious threat to lasting peace and prosperity on the island of Ireland.”

That sentiment was echoed by Nancy Pelosi, Speaker of the House of Representatives. She said that “if the U.K. violates that international treaty and Brexit undermines the Good Friday [peace] accord, there will be absolutely no chance of a U.S.-U.K. trade agreement passing the Congress.”

Johnson’s Conservative British government announced this week that it plans to legislate to give itself the power to deviate from some of the provisions in the agreement about Northern Ireland trade.

It says it’s doing so in order to protect the peace agreement in the event there is no deal with the EU. On Thursday, it said it would try to push the bill into law quickly, scheduling it for debate in Parliament starting Monday.

Many British politicians and lawyers also expressed alarm, saying that reneging on a legally binding international commitment would trash Britain’s reputation for upholding law and order.

“If we can’t be trusted to abide by our word on this matter, well then why would anyone trust us in the future?” said Edward Garnier, a former British solicitor general.

Britain left the political structures of the EU on Jan. 31 and will make an economic break when an 11-month transition period ends on Dec. 31. The two sides are trying to strike a new trade deal by then, but talks have bogged down over issues including fishing rights in U.K. waters and fair-competition rules for businesses.

The two sides’ chief negotiators, David Frost and Michel Barnier, are due to end their latest round of negotiations on Thursday. Both sides say that unless there is an agreement by next month, Britain is facing an economically disruptive no-deal exit on Jan. 1.