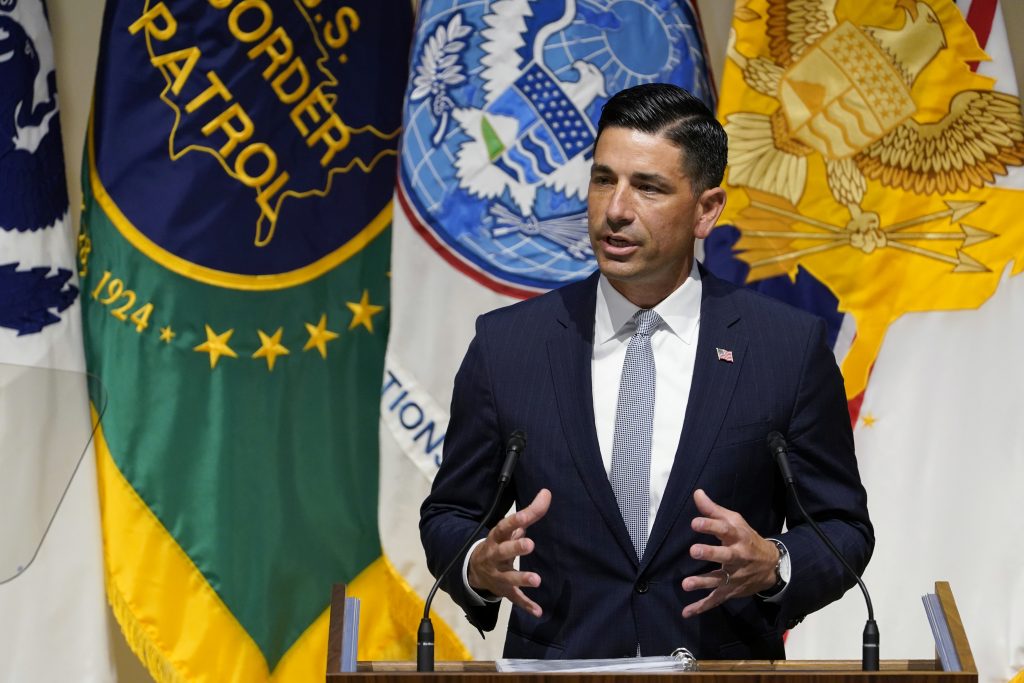 The head of the U.S. Department of Homeland Security on Wednesday defended his response to protests in Portland, Oregon, amid criticism that the agency overstepped its authority with a heavy-handed deployment that reflected the law-and-order re-election campaign of President Donald Trump.

Acting Homeland Security Secretary Chad Wolf ranked the civil unrest in downtown Portland as among the top threats facing the United States, along with the COVID-19 pandemic, election interference and drug trafficking along the southern border.

“Let me be clear. those who seek to undermine our democratic institutions, indiscriminately destroy businesses, and attack law enforcement officers and fellow citizens are a threat to the Homeland,” Wolf said in a “State of the Homeland” speech that spelled out the department’s priorities.

Trump last month nominated Wolf to be the secretary of the department but it’s not yet clear when the Senate will take up the nomination. DHS is the third-largest agency in the federal government. It includes U.S. Customs and Border Protection and the Federal Emergency Management Agency, which has had a leading role in the COVID-19 response.

Protests have been held in downtown Portland since late May, when police officers in Minneapolis killed George Floyd. Wolf deployed large numbers of DHS officers and agents in tactical gear to protect the federal courthouse complex over the objections of state and local officials, who said their presence inflamed the situation.

Wolf has been a vocal defender of the administration’s response to the civil unrest in Portland and elsewhere.

Wolf, speaking at the DHS campus in Washington, dismissed the critics as “a vocal and ill-informed minority” for accusing the agency of “mission drift” or politicizing its role.

He noted that 240 federal officers have been injured in protests and disputed that the demonstrations have been largely peaceful.

“There is no constitutional right to burn cities to the ground and assault the men and women of law enforcement,” he said.

He also tallied what he viewed as other successes by DHS, including efforts by the Cybersecurity and Infrastructure Security Agency to protect the 2020 election from interference by Russia and other nations, and the work of CBP to secure the border.

Also notable was what he called the threat from extremists, singling out “lone offenders and small cells of individuals” without characterizing their possible affiliation. “DHS stands in absolute opposition to any form of violent extremism whether by white supremacist extremists or anarchist extremists,” he said. “We will continue our daily efforts to combat all forms of domestic terror.”