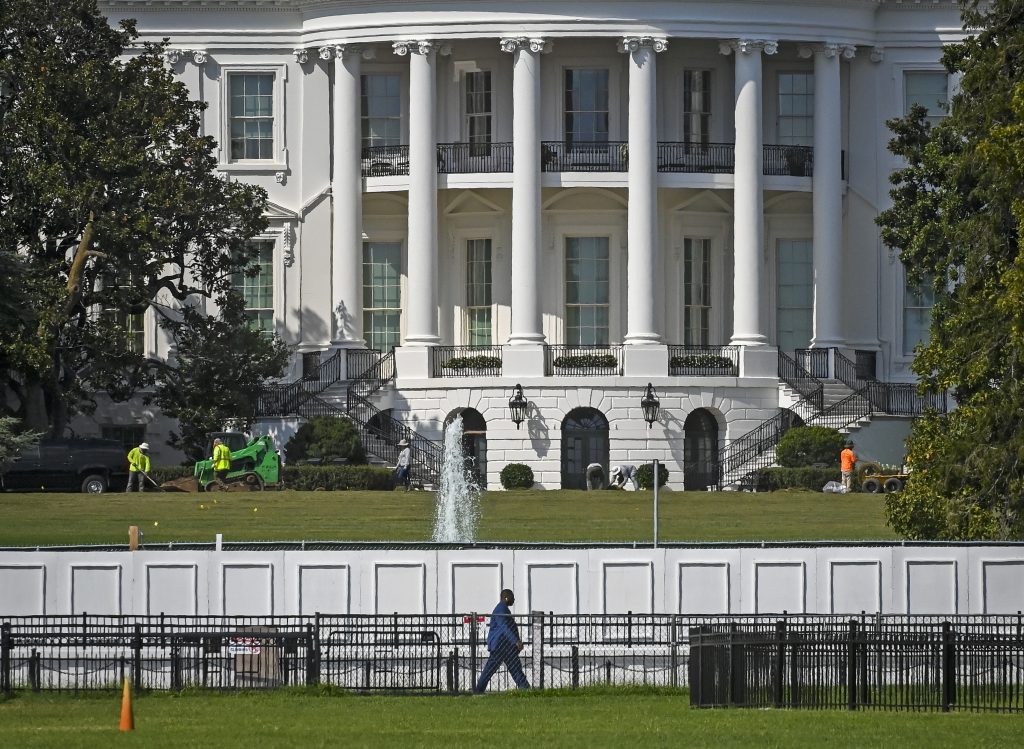 On Aug. 27, Trump delivered his address formally accepting the Republican nomination on the South Lawn before an estimated 1,500 supporters seated on chairs. The president spoke from a stage built in front of the South Portico of the White House. It was flanked by screens and illuminated by scores of spotlights – equipment difficult to position on grass.

Two nights earlier, first lady Melania Trump delivered her convention address in the newly reconstructed Rose Garden, with dozens of supporters seated in chairs. Turf was laid atop the grass as a protective measure, according to one White House official.

“The sod is being replaced at no cost to taxpayers,” said White House spokesman Judd Deere. “Additionally, there has been other planned infrastructure work taking place on the south grounds.”

A Trump campaign official confirmed that the sod replacement was being paid for with campaign funds.

The construction underway includes other repairs and improvements that were already in the planning stages or under consideration, said a White House official.

CNN first reported some aspects of the Rose Garden work.

The work has been ongoing for several days and has interrupted the regular rhythms at the White House. The president has been transported to Joint Base Andrews in a motorcade recently rather than by helicopter because Marine One cannot land on the South Lawn during the construction and repairs.

In addition, White House staff members have kept journalists covering events there from seeing the work underway in the Rose Garden and the South Lawn by using alternate venues. The president typically holds outdoor news conferences in the Rose Garden, but he held Monday’s gathering with reporters instead on the North Portico of the White House. It was the first time in recent memory that the president staged a news conference on the front steps of the residence facing Pennsylvania Avenue.

Officials did not detail how much the repairs would cost.

A White House official said that it was not uncommon in this administration, as well as previous ones, to undertake repairs to the South Lawn after large events, such as the annual Easter Egg Roll or Fourth of July fireworks.

In August, Melania Trump unveiled the redesigned Rose Garden, which was panned by some critics. The first lady took on the Rose Garden renovation as a personal project, along with revamping the White House tennis pavilion.