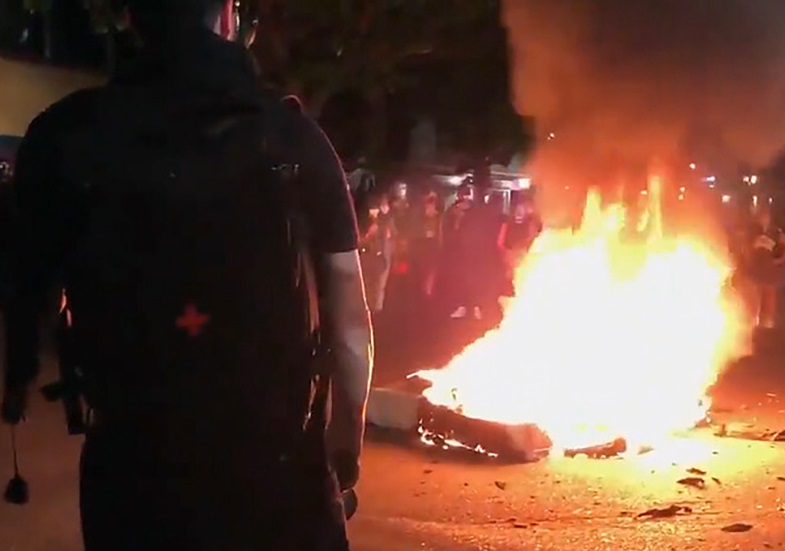 Hundreds of cars, trucks, tractors, motorcycles, and at least one RV hoisted Trump flags and blasted “God Bless the USA” from truck bed speakers for a “cruise rally” through a suburb of Portland, Ore., on Monday.

The rally’s organizers wrote on Facebook that the caravan would not enter Multnomah County, where Portland is located, to keep its participants safe. At a similar rally last weekend, drivers deviated from the route and entered downtown Portland, where a rally participant, Danielson, was shot and killed.

The mood in the parking lot where participants gathered Monday was, in part, celebratory and festive, with some Trump supporters grilling hot dogs. Some drivers had taped over their license plates to conceal their identities, and others had painted Danielson’s name on their car windows.

Local police, who protesters have repeatedly criticized as being too cozy with right-wing activists, helped guide traffic. Organizers said they planned to drive north on the interstate to a certain point, where police vehicles would block the street for drivers to turn around.

One 47-year-old Portland resident who joined the rally said she had grown even more resolute in her support for the president after someone dropped objects onto her car windshield when she and her husband drove into Portland during last weekend’s pro-Trump caravan, and someone else insulted her.

The woman, who gave her name only as Kim because she said she feared she could be targeted by violent left-wing protesters, had arrived at the rally in a gray Dodge truck, its bed outfitted with two American flags, a flag to show support for the police, and a Trump flag.

“We are all going to be peaceful,” she said. “If they want to keep being violent and lie about us, we’ll just get more and more patriots out here.” The left-wing protesters, she said, were out for retaliation. “They killed a patriot last weekend; they stalked him and hunted him and killed him just because he was wearing a hat. If I put my name out there, I’ll be next.”

Demonstrators for racial justice also planned Portland protests for Monday afternoon. Protests the previous night included some violent activity; about a hundred demonstrators gathered outside a police precinct to burn several mattresses, an activity that has alarmed some residents and city officials for its potential to spawn wider destruction.

The National Weather Service on Monday alerted fire agencies to “extremely critical risk for dangerous fire conditions” in the Portland metro area Monday and Tuesday, due to strong winds combined with low humidity.