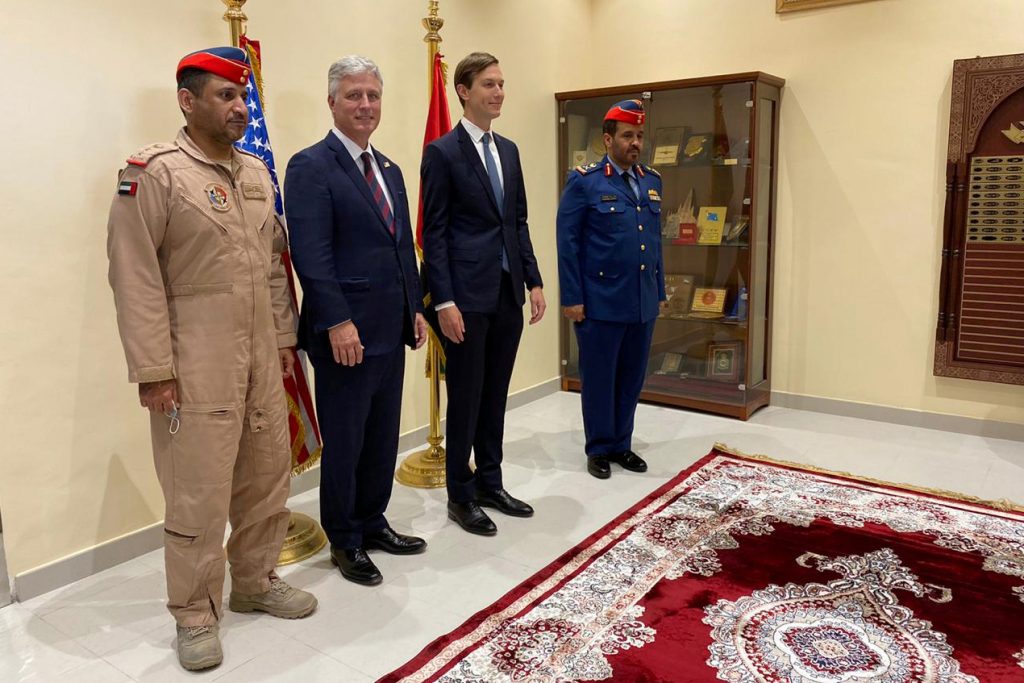 White House adviser Jared Kushner hopes another Arab country will normalize ties with Israel within months, he said, after arriving in the United Arab Emirates accompanied by Israeli officials on the first commercial flight between the countries.

No other Arab state has said so far that it is considering following the UAE, which agreed to normalize ties with Israel in a U.S.-brokered deal announced on Aug. 13. Several have ruled out normalization under current conditions.

Israel’s neighbors Egypt and Jordan reached peace deals with it decades ago, but other Arab states have long held the position that Israel must agree to give more land to the Palestinians for a state before ties can be normalized.

Israel and the United States have said they are pushing more Arab countries to follow the UAE‘s path. Israel’s intelligence minister has mentioned Bahrain and Oman. Kushner will next visit Bahrain, Saudi Arabia and Qatar on his Gulf tour.

Meanwhile, UAE Foreign Ministry Director of Policy Planning Jamal al-Musharakh said on Tuesday that Israel and the United States have promised the United Arab Emirates that Israel will not annex parts of Yehudah and Shomron as a guarantee for normalizing relations between the countries.

“We cannot speculate on future Israeli actions. We have assurances from the U.S. on this, and through our trilateral dialogue,” Jamal al-Musharakh, the director of the Emirati Foreign Ministry’s policy planning department, told Israel-based reporters at a briefing at Abu Dhabi airport, on the matter of annexation.

Asked if the normalization with Israel would fall apart if Israel were to annex in a few months, he said that it would not. However, the UAE’s Foreign Ministry later said he had misspoken in this regard, without clarifying what its position on the matter was.

Prime Minister Binyamin Netanyahu has insisted the annexation plan will still be carried out.

Al-Musharakh stressed that the “halting of annexation was a prerequisite” to the normalization deal announced last month. He claimed that normalization with Israel benefits the entire region, including the Palestinians.

“There is room for innovation and education, and a future for youth not to grow up in an area of conflict,” he said. “There are too many conflicts in the region – and it is high time to look forward to sustainable ways forward and hope for the future.”

He confirmed Netanyahu’s account that the sale of F-35 stealth jets was not related to ties with Israel.

“It was not by any means the driver of this,” al-Musharakh said. The purchase of the F-35s is “a legitimate, longstanding request we have. We see them as legitimate.”

In response to Iranian leader Ayatollah Ali Khamenei’s remarks that normalization with Israel is a “betrayal” and “the Emiratis will be disgraced forever,” al-Musharakh said “the path to peace and prosperity is not in hate speech.”

“That kind of message runs counter to a forward-looking view for the region,” he added.