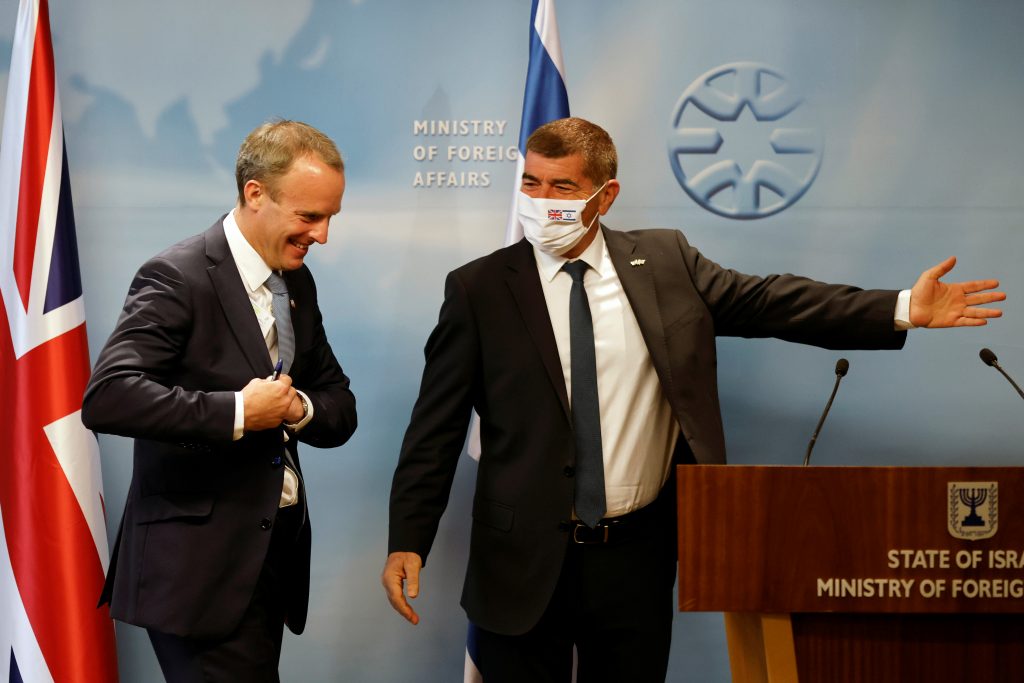 Foreign Minister Gabi Ashkenazi met his British counterpart Dominic Raab in Yerushalayim on Tuesday, expressing disappointment at the United Kingdom’s position on Iran. “We were disappointed to see our friends, the E3 countries, not voting to extend the arms embargo on Iran and thus prevent its adoption,” Ashkenazi said.

In 2015 the E3 – France, the U.K. and Germany – comprised the Joint Comprehensive Plan of Action (JCPOA) striking the 2015 nuclear deal with Iran. Earlier this month, France and the U.K. voted against extending the U.N. arms embargo on Iran that ends on October 18.

“Snapback actions,” meant to extend the embargo even without the support of the U.N. Security Council, were appealed by the U.S. on Thursday.

The U.S. action, though long expected, drew sharp condemnation from Russia and the three European countries that were partners in negotiating the agreement, which lifted all sanctions against Iran in return for limits on its nuclear program.

France, Germany and Britain issued a statement questioning the authority of the United States to demand a snapback since it is no longer a participant in the agreement, which is known officially as the Joint Comprehensive Plan of Action.

Ashkenazi condemned some U.N. Security Council members for undermining world security. “The E3 must understand that genuine opposition to Iranian aggression and concern for the security of the region can not only be made in statements but must also be seen in action,” he said. “A way must be found to reinstate the arms embargo against Iran.”

PM Netanyahu told U.K. Foreign Secretary Raab that he expects Britain to change its policy toward Iran, and that it should join the American sanctions in order to prevent Iran from collecting lethal armaments or advancing toward a nuclear weapon. The prime minister said, “Look at Iran’s aggression today, without a nuclear weapon. What a huge danger Iran would be to the entire world if it did get a nuclear weapon.