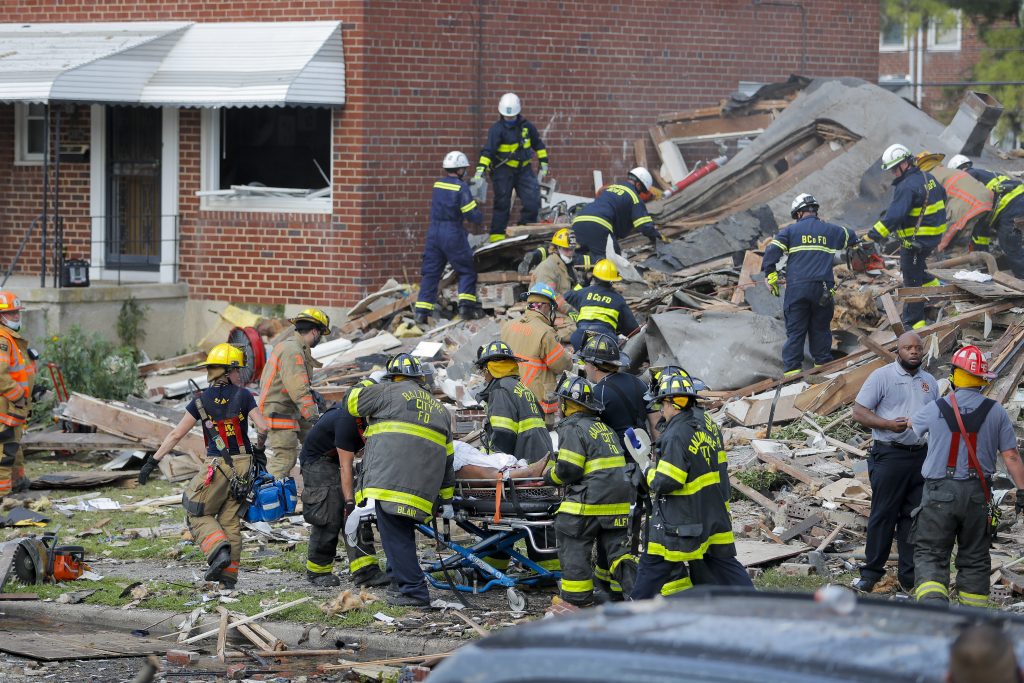 The number of people in critical condition following a deadly explosion that leveled three Baltimore row homes on Monday has dropped from five to one, authorities said Wednesday.

Baltimore Fire Department spokeswoman Blair Adams said in a news release that a 34-year-old man remains in critical condition. A 27-year-old woman and a 65-year-old man are in stable condition, she added.

Four other people, ranging in age from 27 to 93, have been discharged from the hospital, Adams said. The names of the injured were not released.

The city has continued to grapple with the explosion that claimed two lives, displaced 30 people and damaged 200 homes. The exact cause is still under investigation, although fire officials have described it as a natural gas explosion.

A woman who was pronounced dead at the scene was Lonnie Herriott, 61, according to a fire department statement Wednesday. The other person who died has been identified as Joseph Graham, 20, a rising sophomore and engineering student at Morgan State, a historically Black university in Baltimore.

“We are all just devastated by this tragedy,” said Mark Miazga, who was Graham’s ninth-grade English teacher and baseball coach at Baltimore City College.

Miazga told The Associated Press on Wednesday that all of Graham’s English teachers at the high school are mourning his loss. He said that Graham was a nice and hardworking student who took challenges head-on and was willing to make himself less than comfortable to do well. That included performing Shakespeare’s Romeo & Juliet in front of class.

“He was a very memorable young man,” Miazga said. “This is a loss, not only for his family and friends, but for Baltimore.”

Baltimore Gas and Electric has said it’s still trying to determine the cause of the explosion. The utility said in a statement late Tuesday that “no leaks were found” in the gas main or service pipes that brought gas to the row homes.

BGE said earlier Tuesday that it was providing information to investigators regarding “the flows of gas and electricity on customer-owned equipment.”

A woman who survived the explosion said she smelled gas before hearing a “loud boom.”

Anita Moore told The Baltimore Sun on Tuesday that “everything else was a daze” after that.

The 55-year-old was among those rescued from the rubble.

“I was completely covered. All I could see was the bricks and everything laying on top of me. … I should not have been able to walk away from that. They got me out,” she told The Baltimore Sun. “My family members — they’re going through it, but they’re alive. I’m grateful to G-d. I’m grateful to everyone.”