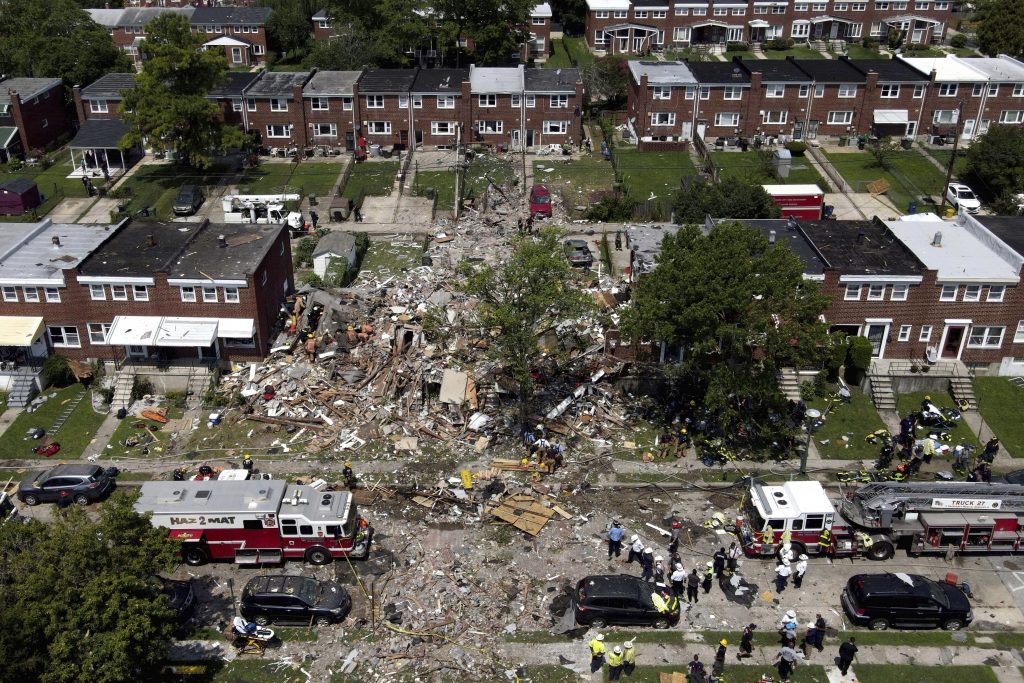 A natural-gas explosion destroyed three row houses in Baltimore on Monday, killing a woman and trapping other people in the wreckage. At least six people were seriously injured as firefighters searched for more survivors.

The blast occurred shortly before 10 a.m. on the 4200 block of Labyrinth Rd., near the major thoroughfare Reisterstown Road. The powerful explosion was felt in some homes in the Jewish neighborhood nearby, but Hatzolah and Misaskim were not called to the scene.

Dozens of firefighters converged on the piles of rubble. A fourth house in the row was ripped open, and windows were shattered in nearby homes, leaving the northwest Baltimore neighborhood of Reisterstown Station strewn with debris and glass.

Six people were hospitalized, while a woman was pronounced dead at the scene, a fire spokeswoman said. Rescuers were painstakingly going through the wreckage by hand.

“We’re prepared to be here throughout the night and as long as it takes,” Baltimore Fire Department spokeswoman Blair Adams said during an afternoon news conference. “We’re trying to make sure that we comb through every area to determine if there are any victims inside.”

While the cause wasn’t immediately clear, The Baltimore Sun reported last year that dangerous gas leaks have become much more frequent, with nearly two dozen discovered each day on average, according to the utility’s reports to federal authorities. The Baltimore Gas and Electric Co. has thousands of miles of obsolete pipes that need to be replaced, an effort that would cost nearly $1 billion and take two decades, the newspaper said.

BGE spokeswoman Linda Foy said Monday afternoon that the utility was still working to shut off a gas main in the area.

“Once we make the area safe, we can then begin to make repairs and to also understand what happened,” Foy said.
The blast was felt in surrounding areas. One resident of a nearby Jewish neighborhood told Hamodia, “We felt a strong vibration. The whole house shook, and that was it – it lasted just a few seconds.”

Another woman told Hamodia that she had been davening, and “suddenly heard a loud noise and felt a strong shake.”

“I could not imagine what it was – I thought perhaps that the air conditioner upstairs fell out of the window, or that someone broke in through the upstairs window,” the woman said. “I was so scared – I just stayed where I was until my husband came home from shul. He said that he heard it while walking home, so it must have been something outside. It was really very scary.”

The blast occurred several hundred feet from a mall on Reisterstown Road that includes Shabsi’s Judaica Center. The shop was not yet open for the day, but an employee told Hamodia that she and a colleague were already in the store when the explosion occurred.

“We heard a loud bang and jumped,” the woman said. “We ran outside and saw that the glass window in the mail store next door had shattered. I thought the explosion was there. I went inside to call 911, but they did not answer – they called me back 35 minutes later. In our store, a light bulb shattered, and a picture fell off the wall and broke, but baruch Hashem, that was all.”

Reisterstown Road is closed for several blocks around the area of the blast, but Shabsi’s is having walk-in customers, and its gas and electricity are on. The Shabsi’s employee said the store is “getting phone calls from all over the country, asking if we are okay.”

Diane Glover, who lives across the street from where the blast occurred, said hours after the incident that she was “still shaken up.”

Glover, 56, and her 77-year-old father, Moses Glover, were at home when the massive explosion shook their house, knocking over a fan and some of her DVDs.

“I jumped up to see what was going on. I looked out the bathroom window and there was a house on the ground,” she said. “It sounded like a bomb went off.”

Dean Jones, 36, who lives nearby, said he ran to the scene and saw a mess of bricks, glass and cinder blocks. He and others began calling out for survivors and were able to locate an older woman whom firefighters eventually pulled out. Kevin Matthews, who lives on the block, told The Baltimore Sun that he could hear trapped children shouting: “Come get us! We’re stuck!”

In late 2017, BGE asked the Maryland Public Service Commission to approve a new gas system infrastructure and a cost-recovery mechanism to pay for upgrades.

“Founded in 1816, BGE is the oldest gas distribution company in the nation,” the PSC wrote in a 2018 order approving a modernization plan. “Like many older gas systems, a larger portion of its gas main and services infrastructure consists of cast iron and bare steel – materials that are obsolete and susceptible to failure with age.”

Baltimore City Council President Brandon Scott said he needs “the entire city of Baltimore right now to focus on hopeful prayers for those individuals that have been impacted by this.

“I want everybody in the city really to rally around those individuals that are still fighting for their lives,” he said at a news conference.