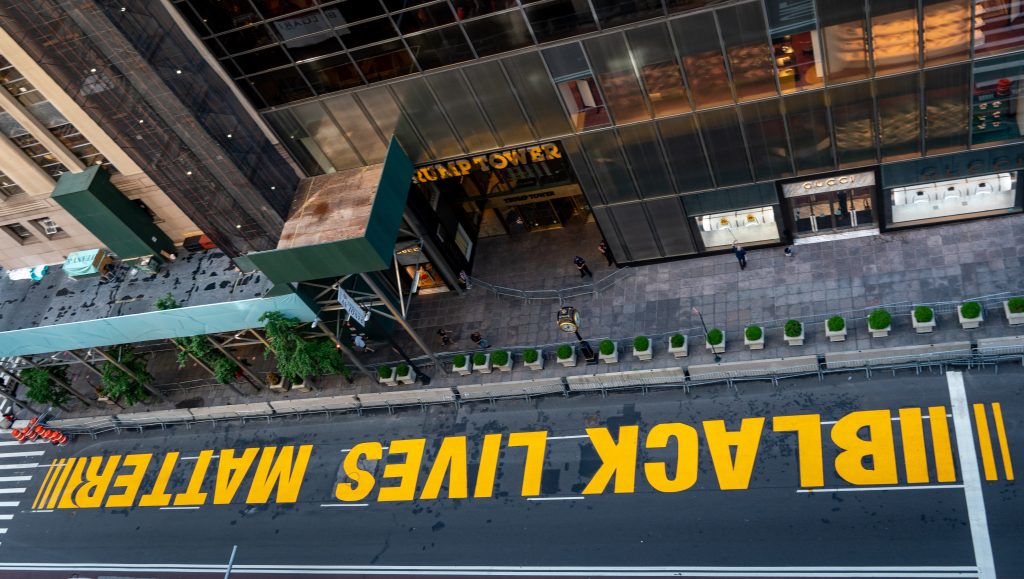 New York City is facing another lawsuit from conservative organizations wishing to paint their own slogan on a city street, after Mayor Bill de Blasio allowed the painting of “Black Lives Matter” on multiple streets across The Big Apple.

The lawsuit was filed Monday in federal court in Manhattan by Blue Lives Matter, a pro-police group; and Standing Up for NYC, which describes itself in the lawsuit as “a group of city residents who are antipathetic to the Mayor’s politics and policies.” The plaintiffs seek to paint the pro-police slogan “Blue Lives Matter” near the “Black Lives Matter” slogan painted in front of Trump Tower on Fifth Avenue in Manhattan, or on a “substantially similar” street.

As anti-police protests swelled in New York as well as across the nation in recent months following the death of George Floyd, a black man, while in police custody in Minneapolis, de Blasio has allowed the painting of what he calls “murals” with the “Black Lives Matter” slogan in front of Trump Tower, as well as in every borough of the city. The mayor himself has participated in painting the murals.

Blue Lives Matter and Standing Up for NYC subsequently requested, but were not granted, permission to paint “Blue Lives Matter” on a city street, to honor police officers killed in the line of duty.

In Monday’s lawsuit, the plaintiffs claim that since Black Lives Matter is a private organization, by allowing those murals, the city “has opened up a public forum for private speech on its public streets.” De Blasio has expressed strong support for the Black Lives Matter movement, and last month defended his granting that group exclusive permission for its mural, telling a Hamodia reporter at a press conference that it “transcends any notion of politics.” But the plaintiffs say allowing one mural while denying others based on the messages’ perceived importance is a violation of the First Amendment right to freedom of speech.

The case will likely hinge on whether the mural will be considered government speech – government officials are permitted to promote their own viewpoints in a government forum – or private speech, which government must give equal rights to regardless of viewpoint.

“The critical question here,” Josh Blackman, a constitutional law professor at the South Texas College of Law Houston, told Hamodia, “is whether the city opened up a new ‘forum’ by allowing Black Lives Matter to be painted on the street. If this new form of expression constitutes a new avenue for people to speak, then the government cannot restrict access based on viewpoint.”

This is the second lawsuit the city is facing from a conservative organization wishing to paint its slogan. Last month, a group called Women for America First, which describes itself as “women who support the America First Agenda” and shares leadership with Women for Trump, filed suit to paint its motto, “Engaging, Inspiring and Empowering Women to Make a Difference!” near Trump Tower or on an alternative prominent city street.

The city Law Department did not respond on Tuesday to Hamodia’s request for comment on the lawsuit.