In the wake of recent protests calling for police reform, the mayor himself participated in the painting of Black Lives Matter murals in front of Trump Tower on Fifth Avenue, and elsewhere around the city. Subsequently, several conservative groups have written letters seeking permission to paint their own slogans.

A Virginia-based organization called Women for America First, which says it “routinely holds events in New York City” and seeks to “promote the empowerment of women,” wrote to de Blasio on July 9 asking to paint its motto, “Engaging, Inspiring and Empowering Women to Make a Difference!” somewhere in the city, such as on Fifth Avenue, on the FDR Drive, outside Gracie Mansion, or near Times Square or City Hall. Women for America First describes itself as “women who support the America First Agenda,” and shares leadership with the Women for Trump group.

Pro-police groups called Blue Lives Matter and Standing up for NYC sent de Blasio a letter July 15, seeking permission to “use our own funds and resources to paint a similar Blue Lives Matter mural” near police headquarters in Lower Manhattan, or in Times Square, to honor police officers killed in the line of duty, and asked the mayor for his “unbiased support.”

Asked by a Hamodia reporter at his press conference Thursday whether he would allow these groups “to paint their own political messages,” the mayor replied, “No, everything’s individual and specific.”

“We have had a seismic moment in this country’s history,” de Blasio said. “I think what’s happened here can only be compared to the Civil Rights Movement of the 50’s and 60’s in terms of its importance. The original sin of the United States of America, slavery and all of the effects over 400 years being brought out in the open in a new way and a chance for this country to get it right, to address this problem, to move forward. And it’s summarized in the three words ‘Black Lives Matter.’ And so this is about something much bigger than any one group. This is about righting a wrong and moving us all forward. So I think that’s the right approach.”

When the reporter mentioned the possibility that it may be a violation of the First Amendment for the government to “promote one political message over another,” the mayor replied, “I don’t think it’s a political message in the traditional sense. I think it’s a message about human respect and the value of human beings and addressing the fact that one group amongst us in particular has been devalued for centuries. And that can’t go on. I think it transcends any notion of politics.” 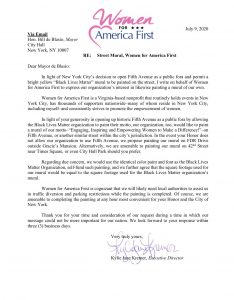 But Kylie Jane Kremer, executive director of Women for America First, told Hamodia on Thursday afternoon that she believes the mayor’s granting preferential treatment to Black Lives Matter is unconstitutional.

“This is about the mayor picking winners and losers, and a violation of freedom of speech under the First Amendment,” said Kremer. “And under the Fourteenth Amendment, we all have equal protection under the laws. We should all have equal opportunity to be able to paint something on the streets once the mayor opened them up to be a public forum.”

Standing up for NYC leaders told Hamodia they are seeking to promote a pro-police message but not denigrating the Black Lives Matter movement.

“We actually applaud the Black Lives Matter movement because it’s a very important cause,” said Standing up for NYC co-founder Jay Cohen, a retired NYPD detective. “The Blue Lives Matter mural was envisioned to honor the memory of those officers that gave the ultimate sacrifice to the city that now shuns them, and to stand as a morale booster for the cops that are still on the job now – that people still love them and need them and we need law and order in the city. We can’t have chaos and anarchy.”

Tatiana Davidoff, another co-founder of Standing up for NYC, said that her organization is not seeking to paint its mural near the Black Lives Matter mural, which would diminish the latter’s, and that it simply wants to “acknowledge the lives of the people who took an oath to serve and protect us.”

Both Standing up for NYC and Women for America First told Hamodia that they have not yet received responses to their mural request. An attorney for Women for America First said that the organization intends to file a lawsuit against the city if its mural request is not granted. Standing up for NYC said it is “in communications with a constitutional attorney to explore the legal options available.”

De Blasio recently lost a lawsuit resulting from his past comments giving special rights to the Black Lives Matter movement.

In early June, when de Blasio was asked by a Hamodia reporter why he was allowing protest gatherings even while continuing to uphold pandemic restrictions on religious gatherings and store openings, the mayor replied, “When you see a nation, an entire nation, simultaneously grappling with an extraordinary crisis seeded in 400 years of American racism, I’m sorry, that is not the same question as the understandably aggrieved store owner or the devout religious person who wants to go back to services.”

In a subsequent federal lawsuit brought by Catholic priests and religious Jews in New York seeking to have religious gatherings treated equally to the protests, the judge granted the plaintiffs’ injunction request, and cited these comments by de Blasio as evidence that he was unconstitutionally giving the protests “preferential treatment.”