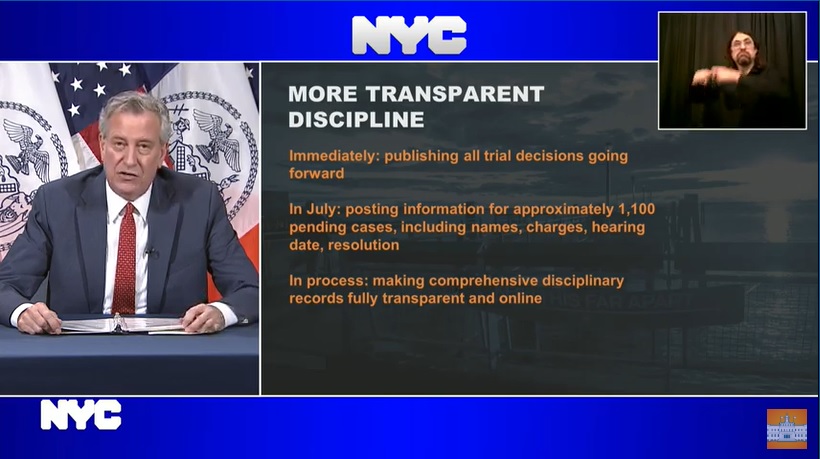 A federal judge has halted the public release of police officer disciplinary records in New York, temporarily turning back a state transparency reform enacted in the wake of the police killing of George Floyd.

Judge Katherine Polk Failla granted a temporary restraining order late Wednesday barring police departments and other entities in the state from disclosing discipline records until at least Aug. 18, when she’ll hear arguments in a union lawsuit challenging their release.

Failla took over the case when it was transferred from state court, extending and expanding an existing stay that paused public disclosure of records concerning unsubstantiated and non-finalized allegations or settlement agreements.

The Police Benevolent Association, representing New York City police officers and other public safety unions, sued the city on July 15 to block Mayor Bill de Blasio from making good on a promise to post a database of misconduct complaints online. The unions argued that posting unproven or false complaints could sully officers’ reputations and compromise their safety.

“The battle to protect the safety and due process right of public safety officers and police goes forward,” said Hank Sheinkopf, a spokesperson for the union coalition.

A lawyer for the city’s police watchdog agency, the Civilian Complaint Review Board, said the ruling is blocking the agency from “making the public aware of complaints against the people who are supposed to be protecting them.”

In issuing the temporary restraining order, Failla also barred the New York chapter of the American Civil Liberties Union from publicly releasing records it had already obtained in the wake of last month’s repeal of the law keeping them secret, finding that the organization had somehow been “acting in concert” with city government.

The organization, which often tangles with the city in court, said it obtained officer misconduct complaints from the CCRB under the state’s open records law. The NYCLU said it received the records before the union’s lawsuit was filed and was not a party to it.

“The federal court has no authority to bar us from making it public, and we will contest this unprecedented order as quickly as possible,” said Christopher Dunn, the organization’s legal director.

“With the repeal of section 50-a, the public is entitled to have access to complete information about police misconduct, and we have an absolute right to share with the public the information we have.”

New York lawmakers, spurred to action last month by protests over Floyd’s death in Minneapolis and other police misconduct, repealed the 50-a law that for decades blocked the public disclosure of disciplinary records for police officers, as well as firefighters and correctional officers.

While the law was on the books, the officers’ unions sued to make it even more restrictive so that the public and even the victims of police misconduct couldn’t learn the outcomes of internal discipline hearings.

In the wake of the repeal, the CCRB moved quickly to respond to requests for the newly available records — a process now on hold because of the temporary restraining order. The NYPD, which also probes complaints through its internal affairs bureau, has yet to respond to requests from The Associated Press and other news media outlets for its disciplinary records.