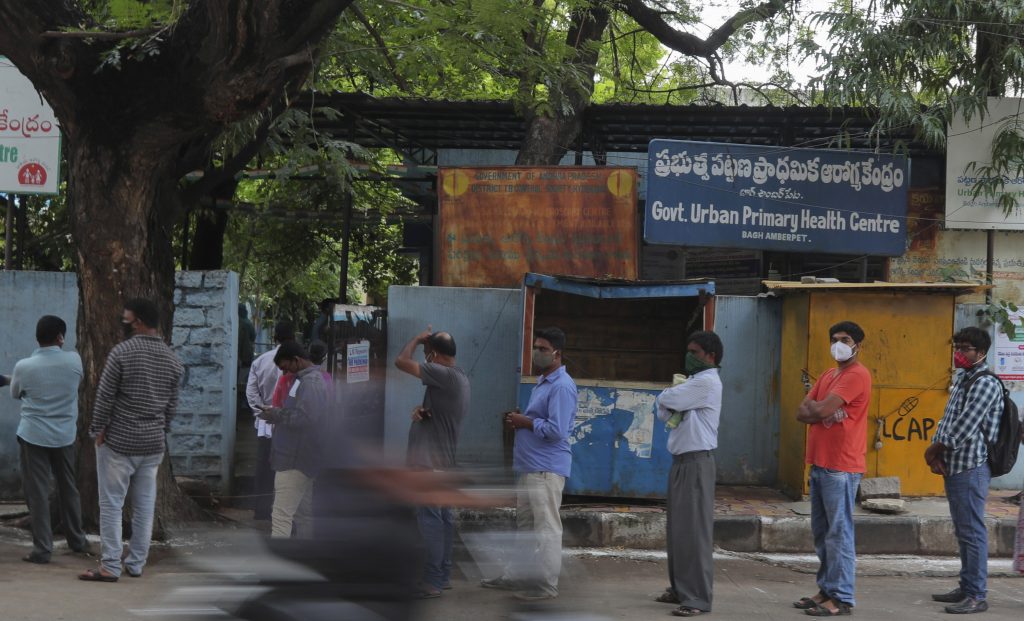 Countries around the world are re-imposing lockdowns and implementing new health checks at their borders in an effort to curb a resurgence of the coronavirus before it spins even further out of control.

Starting Wednesday, all travelers arriving in Greece from a land border with Bulgaria were required to carry negative coronavirus test results issued in the previous 72 hours. The new rules, which follow an increase in tourism-related COVID-19 cases, triggered an immediate drop in arrivals compared to recent days.

In the U.S., some state governments and businesses imposed their own new restrictions or sanctions.

In New York, Gov. Andrew Cuomo added to a list now totaling 22 states whose visitors will be required to quarantine for 14 days if they visit the tri-state region. Out-of-state travelers arriving in New York airports from those states face a $2,000 fine and a mandatory quarantine order if they fail to fill out a tracing form.

And Walmart became the largest U.S. retailer to require customers to wear face coverings at all of its Sam’s Club and namesake stores.

Meanwhile, the first U.S. governor to announce he had tested positive for COVID-19, Oklahoma Gov. Kevin Stitt, said he would be quarantining at home. The first-term Republican governor has backed one of the country’s most aggressive reopening plans, has resisted any statewide mandate on masks and rarely wears one himself.

The developments come with more than 13 million cases of coronavirus cases confirmed worldwide, and with over 578,000 deaths, according to a tally by Johns Hopkins University. The actual numbers are thought to be far higher due to a number of reasons including limited testing.

After the border restrictions Greece imposed Wednesday, traffic at the crossing fell by about half, authorities said, but waiting times were still lengthy and a line of cars and trucks was over 500 meters long as the number of tests carried out by medical teams at the border were increased.

Gergana Chaprazova, 51, from Plovdiv in southern Bulgaria, plans to visit the Greek seaside town of Kavala with her husband, and complained that she was being tested again.

“I have to wait for a test but I (already) have test from Bulgaria. I don’t understand why I must have a test here,” she told the AP.

Romania, citing the rising number of infections, announced a 30-day extension for a nationwide state of alert. Measures include mandatory face masks on public transportation and in shops, while restaurants may only serve customers in outdoor locations. The country set a record for new infections on Saturday.

Residents of Australia’s second-largest city, Melbourne, were warned on Wednesday to comply with lockdown regulations or face tougher restrictions. Melbourne’s 5 million people and part of the city’s semi-rural surroundings are a week into a new, six-week lockdown to contain a new outbreak there.

“The time for warnings, the time for cutting people slack, is over,” Victoria state Premier Daniel Andrews said. “Where we are is in a very serious and deadly position.”

In Serbia, which has been hit hard by a spike in infections and anti-government protests, a government crisis team expanded a ban on gatherings of more than 10 people from Belgrade to encompass the entire country. Masks were also made mandatory in public spaces where there is no opportunity for five feet of distancing, such as in lines to enter shops and bus stations.

Renewed restrictions also took effect in Hong Kong, with public gatherings limited to four people, restaurants restricted to takeout after 6 p.m., and a one-week closure for gyms, and selected other businesses. Masks were mandated on public transit for the first time, with the non-compliant being fined.

After a surge in daily infections beginning last month, Israel moved last week to reimpose restrictions, closing events spaces, and bars. It has imposed lockdowns on areas with high infection rates, which in some cases sparked protests from residents.

Officials warn that if case numbers don’t come down in the coming days, Israel will have no choice but to lock the entire country down again, as it did in the spring.

“I don’t see what other tools we have aside from a lockdown,” Israeli Health Minister Yuli Edelstein told the Israeli news site Ynet. “Unless there is a miracle.”

South Africa, Africa’s most developed country, is already showing signs of being overwhelmed by the pandemic — an ominous outlook for the rest of the continent of 1.3 billion people.

A ban on alcohol sales and a night curfew were reimposed this week to reduce the volume of trauma patients to hospitals that are struggling to cope with an influx of COVID-19 patients.

One result was more economic pain in a country which already has a high unemployment rate of 30%.

Concerns exist even in locations that have not experienced outbreaks. A World Health Organization delegation visiting Turkmenistan, a country that has not reported any coronavirus infections, recommended that the country take stronger actions.

In Spain, authorities in the northeastern Catalonia region made fresh attempts to stem the spread of new coronavirus outbreaks as health experts warned that more and better contact tracing is needed.

Since midnight Tuesday, 160,000 residents in and around the city of Lleida were forbidden to leave their homes unless it’s properly justified. The area was closed off, with police checkpoints outside every municipality.

Authorities in the English town of Blackburn also imposed new restrictions on social mingling amid what they say is a “rising tide” of new coronavirus cases. Director of Public Health Dominic Harrison said that if infection numbers didn’t fall by July 27, officials would begin to reimpose lockdown measures such as the closing of shops and other businesses.

And in Tokyo, Gov. Yuriko Koike said Wednesday that the spread of the infections in the Japanese capital have escalated to levels tantamount to “issuing an alarm” and requested that residents and business owners step up their preventive measures.