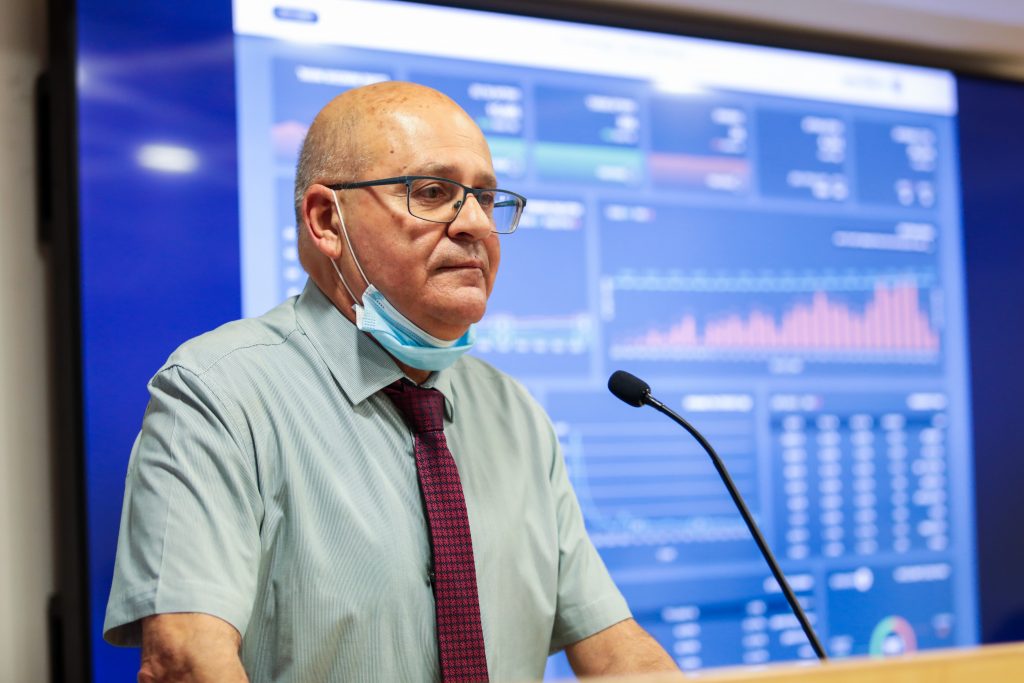 Health Ministry Director General, Professor Hezy Levi, sought to dispel some of the anxiety over the highest rate of new coronavirus cases since the initial outbreak in April.

Levi attributed the soaring numbers to a major increase in the amount of testing being done, Arutz Sheva reported. More infections are being detected, but that doesn’t necessarily mean that the rate of infection has increased.

As currently over 20,000 tests are administered in Israel daily, it made sense that the total confirmed cases would skyrocket the way it has.

He pointed out that during two days in April that saw 750 infections a piece, there was a relatively insignificant amount of virus testing.

On Wednesday evening, the Health Ministry confirmed 980 new coronavirus infections over the previous 24 hours, the highest single-day total since the start of the pandemic.

There are currently 7,838 active confirmed cases.

The ministry said the number of patients in serious condition was up to 56, an increase of ten in 24 hours, though the number of people on ventilators remained steady at 24 and the death toll rose to 321.

The number of COVID-19 tests conducted on Tuesday was 20,018, the highest since the start of the crisis, with a positive rate of 3.9 percent.

The ministry said on Wednesday morning that the percentage of cases tested positive since midnight was 5.2 percent, in comparison to a rate of 3.9% on Tuesday.

According to Health Ministry data, Jerusalem saw almost 120 cases over the last day; Ashdod saw 94 cases since Tuesday morning, up to 764 from 670; Bnei Brak recorded just over 50 cases; and Tel Aviv increased its tally by 46.

Dr. Erez Onn, head of the hospital division at the Health Ministry, said Wednesday that there were increasing numbers of patients hospitalized.

“We are opening more and more dedicated departments for coronavirus patients,” Onn told the Ynet news site. “Departments are filling up, and we are seeing a trend in the increase of [numbers of] the severely ill.”

Officials in the Health Ministry are said to be pushing for imposing strict lockdowns in dozens of cities in a dramatic push to contain the outbreak.

Channel 12 reported Tuesday evening the recommended lockdowns will be tougher than the current “restricted zones,” where people are free to leave their homes and even to enter or leave the restricted zones for certain purposes, the report said, citing sources in the ministry.

The areas to be locked down will be larger than the restricted zones, most of which consisted of several streets or small neighborhoods, according to the report.

The areas likely to be locked down include the cities of Dimona, Kiryat Gat, Ashdod and Ramle. The outlet reported Wednesday that clusters of infections have been traced to weddings and other celebrations, particularly in those cities.

The mayor of Dimona told Channel 12 that his family canceled his daughter’s wedding in a bid to set an example.

Ministers and officials will reportedly hold a series of discussions on the matter over the next two days, and police have already been told to prepare to enforce the new restrictions.

“We are out of time, we have to do this here and now,” the network quoted an unidentified Health Ministry official as saying.

However, the network cited other Health Ministry officials calling the proposed lockdowns a draconian and extreme step that isn’t necessary, because there are now “effective treatments” for COVID-19 and “it isn’t clear where the catastrophe is here.”