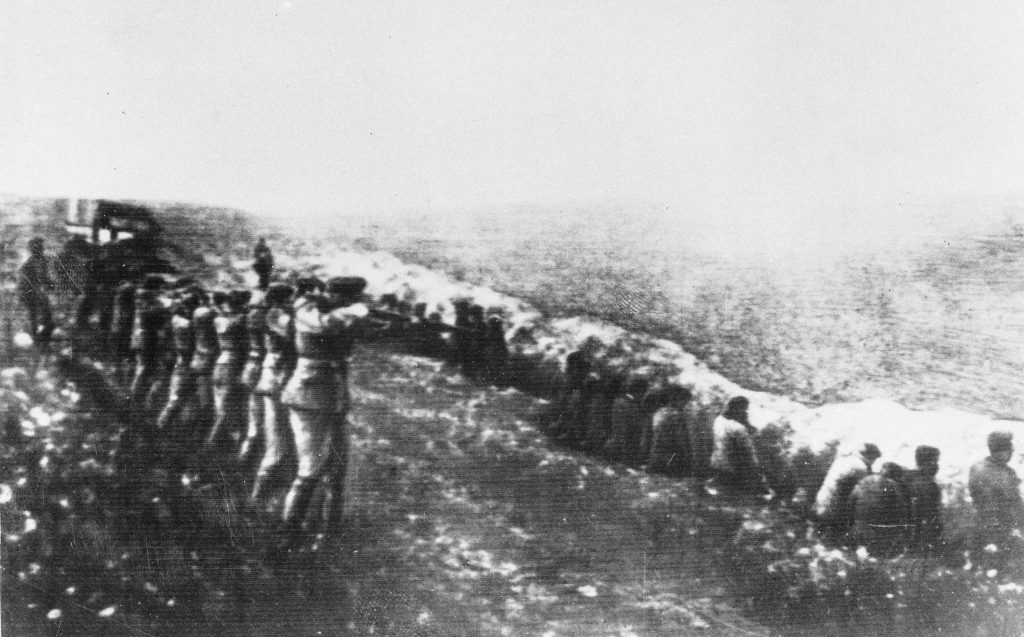 A plan to create a technology-heavy interactive exhibit at the site of the Holocaust-era Babi Yar massacre in Ukraine has met with sharp international criticism.

The proposal was part of a $100 million privately funded project to overhaul the memorial. It calls for visitors to undergo a computerized profiling, after which they would be assigned the role of a victim, a local collaborator, Nazi, or others present at the mass shooting that killed more than 100,000 people, including Jews, Soviet prisoners of war, Roma and others.

Participants would don virtual reality googles and view 3D images, using techniques designed for gaming and avant-garde cinema that would simulate the atrocities that occurred near Kiev in September 1941.

The plan is the brainchild of a controversial Russian filmmaker Ilya Khrzhanovsky. His award-winning work on Soviet era oppression was created using similar immersion tactics, but he himself has recently faced accusations of abuse and ethical lapses.

Both the museum’s choice of Mr. Khrzhanovsky to lead the project and the public revelation of his proposal sparked an uproar and led to the resignation of several of the memorial’s senior staff members. Babi Yar’s curator, Dieter Bogner told The New York Times that the “the core exhibit dangerously approaches the impression of a Holocaust Disney.”

The museum’s board has stood by their choice of Mr. Khrzhanovsky, but emphasized in a statement that no final judgment on the filmmaker’s proposals would be made until the end of the year.

Mr. Khrzhanovsky has defended his vision for the new exhibition, saying that his intention is to show the realities of how the decisions of individuals affected the outcome of what was one of the largest single acts of mass murder during the Holocaust.

Holocaust scholar, Dr. Michael Berenbaum, who served as project director for the United States Holocaust Museum in Washington, D.C., and who has since consulted on many other memorials and exhibits about the period, said that it seems Mr. Khrzhanovsky abilities have been used without appropriate guardrails.

“It’s clear that he has the tools to make Babi Yar a very powerful experience and wants to do that, but I’m not sure that he’s looked at what we’ve learned about Holocaust education and realized how much fire he’s playing with,” he told Hamodia.

Dr. Berenbaum said that the museum need not shy away from controversy per se, but that the resignations the proposal had set off sent a message that the plan lacked “restraint.” He was also critical of putting visitors in the role of Nazi or Ukrainian collaborationist murderers, an experience that he feared may have a negative impact on many who digitally experience the role.

Dr. Berenbaum reflected on two rules that he and others involved in designing Holocaust museums have laid down, which he said Mr. Khrzhanovsky seems to have ignored.

“If someone oohs and ahhs about the technology then we’ve gone wrong, but if they ooh and ahh about what the technology empowers us to convey, that’s correct. Another rule we had is that in order to show the Holocaust, you have to show dehumanization, but at the same time, we had to be careful that in the process, we do not dehumanize again,” said Dr. Berenbaum.

Under Soviet rule, the Babi Yar site was almost entirely bereft of mention of the over 33,000 Jews killed there in the days between Rosh Hashanah and Yom Kippur. In more recent decades, attempts have been made to revamp the memorial into one that tells a more accurate version of the events.

The board supervising the $100 million project is headed by former Soviet dissident and Israeli cabinet minister Natan Sharansky, and counts among its members former U.S. Senator Joseph Lieberman and World Jewish Congress President, Ronald Lauder, as well as more than a dozen prominent European politicians and philanthropists. A statement they released acknowledging the backlash said that all historical content would remain in the hands of experts, and that the final decision would be a joint effort.

“Through our involvement in the project we guarantee observance of the ethical and professional standards of a science-based approach to creating this memorial,” they said.

Rabbi Yaakov Dov Bleich, who serves as a member of the board in his capacity as chief rabbi of Ukraine, told Hamodia that the proposal, which was made last fall, had never been seriously considered by the museum and was only made public now through a leak to international media instigated by an internal political struggle involving former employees of the memorial.

He backed up the board’s confidence in Mr. Khrzhanovsky’s ability to create a unique and contemporary exhibit, but was equally confident that the final result would be far more reserved than the idea that has been widely reported on.

“[Khrzhanovsky] was coming off of a project that was all about immersing people in a simulated reality, and his initial idea for Babi Yar reflected that, but it’s not what we’re going to be working with,” said Rabbi Bleich. “He clearly has the skills to do something very unique here and if you look at who is on the board, it is not a list of people who would let him use this opportunity to produce something that would be inappropriate.”