Israel Netanyahu Has a Government!
Israel 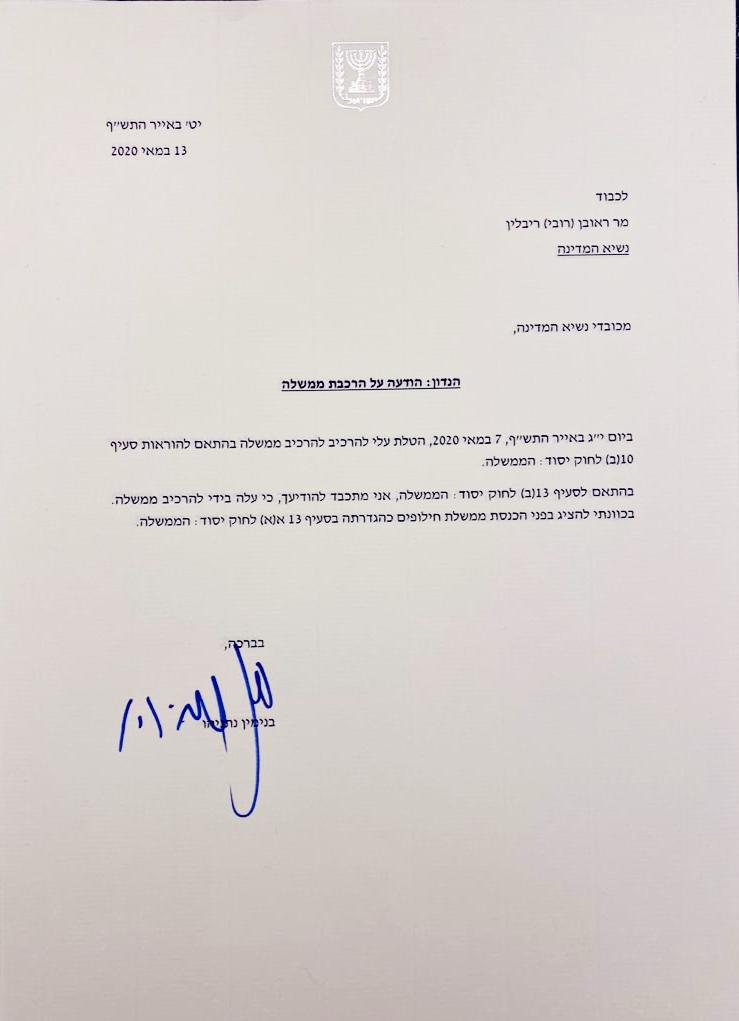 Israeli Prime Minister Binyamin Netanyahu‏‏ announced on Wednesday night that he has succeeded in forming a government.

Netanyahu sent a formal letter to Blue and White leader Benny Gantz, in his capacity as temporary Knesset speaker, as well as one to President Reuven Rivlin, to inform them of the long-awaited –– and for some, long-dreaded –– moment.

The swearing-in ceremony is set to take place at 10 p.m. Thursday at the Knesset.

Final agreement of the coalition partners –– Likud, Blue and White, United Torah Judaism and Shas –– were secured during the day, and not without additional drama.

On Motzei Lag BaOmer, the Rebbe of Vizhnitz made an historic personal visit to Israeli Prime Minister Binyamin Netanyahu‏‏ to secure the latter’s promise to uphold the status quo in religious affairs in the state of Israel.

The Rebbe made the unpublicized trip from Chatzor Haglilit in the north to the PM’s residence in Yerushalayim, where they discussed the matter for over 45 minutes. At the conclusion, Netanyahu escorted his distinguished visitor to the door.

Likud negotiator MK Yariv Levin, slated for the position of Knesset speaker, issued a statement lauding Shas chairman Rabbi Aryeh Deri for playing a role “central in the process of forming a government and bridging the differences” with Blue and White.

Former Minister Ariel Atias, who represented Shas in the signing of the agreement, said that Shas “retained the principles that led it to the great achievement of the elections both in maintaining the education [portfolio], Jewish tradition and the status quo, and in addressing the [needs of] weak populations, setting budgets via the interior ministries, the Negev periphery and Galil [portfolios].”

In the wake of failed talks with Yamina chairman Naftali Bennett to enter the coalition, Netanyahu was to meet later Wednesday night with Rabbi Rafi Peretz, the outgoing education minister from Yamina, to see if he could be induced to lead his supporters in the party into the government, according to Channel 13.

A source close to Netanyahu confirmed to The Jerusalem Post that he offered the Foreign Ministry in the second half of the term to outgoing Culture Minister Miri Regev. As Vice Prime Minister, Netanyahu intends to handle foreign affairs, and wants a loyalist like Regev to work with.