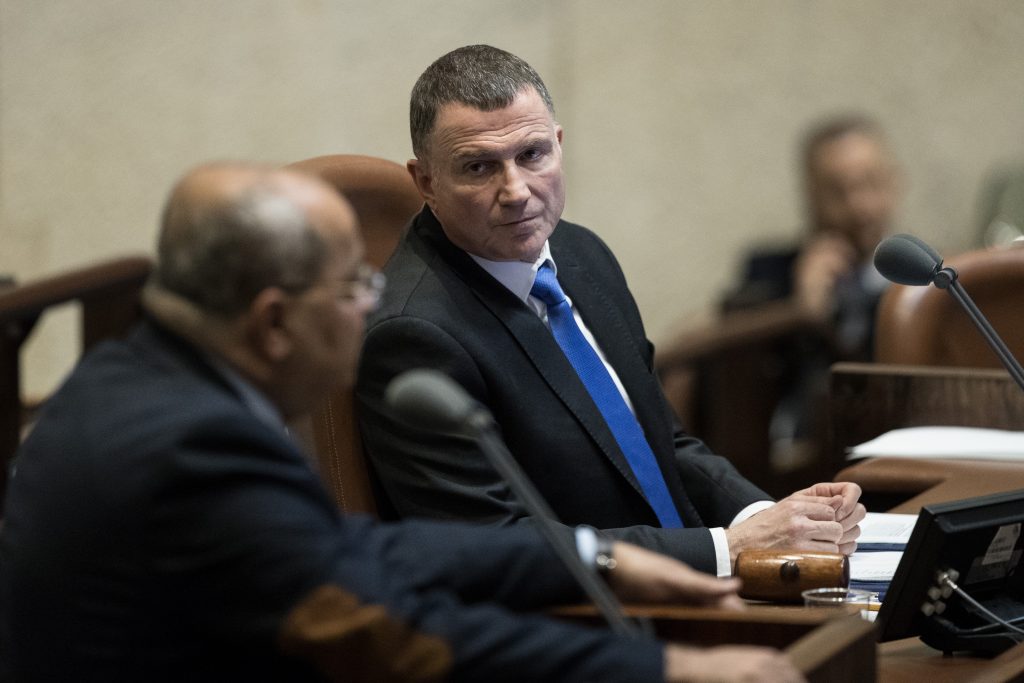 “After serving the citizens of Israel for seven years as Knesset speaker, I chose to take on the central and significant challenge facing the State of Israel, the fight against the coronavirus and preparing the health system for new challenges,” Edelstein said in a joint statement with Netanyahu.

In a meeting of the two earlier in the day, Netanyahu reportedly gave Edelstein the pick of ministries in Likud hands.

“I thank Edelstein for acceding to my request and choosing the most senior and important portfolio… in particular at this time,” Netanyahu said, adding the Likud No. 2 will also be a member of the security cabinet and deputy chairman of a ministerial body overseeing the response to the coronavirus.

But if the appointment solved one problem, it exacerbated another—how to satisfy Yamina’s demands for a meaningful role in the government when there aren’t enough senior ministries to go around. Yamina leader and outgoing Defense Minister Naftali Bennett was lobbying for the job that went to Edelstein.

“Netanyahu slammed the door on our entry to the government,” a Yamina source was quoted as saying by The Times of Israel. “He looked for the perfect way to humiliate Yamina and its voters and succeeded in this.”

“This is a calculated move by Netanyahu to destroy the alliance with religious Zionism. Netanyahu’s betrayal of his biggest supporters signals the beginning of his end in politics,” the source added.

Later, in response, Netanyahu denied the charge, and insisted that while he wants Yamina in the coalition, they’ve been making unrealistic demands.

“They requested four senior [ministerial] portfolios for six Knesset members,” he said in a video statement, which he described as “impossible.”

He also noted that despite having been part of his right-religious bloc, Yamina refused to recommend he be tasked with forming the new government last week.

Edelstein held the position of Knesset speaker from 2013 until earlier this year, when he defied the High Court on convening the parliament. The post was then taken up by Blue and White’s Benny Gantz.

Edelstein reportedly sought a return to the post, but Gantz has thwarted it, after Edelstein stood in the way of his party’s legislative program at the time, namely to get rid of Netanyahu. The veto was enshrined in the coalition agreement.

Blue and White had sought a medical professional of their choosing for the Health portfolio, but apparently could not come to terms with the Likud about what they would have to give up in order to get it.

Meanwhile, Gantz was said to be hedging about vacating the speakership, which he is supposed to do 48 hours before the swearing-in Thursday at 1 p.m.

According to Haaretz, he’s taking no chances, lest the coalition deal fall apart before then. Staying on as speaker affords Gantz power in his dealings with Netanyahu until he becomes Defense Minister, as the deal promises.