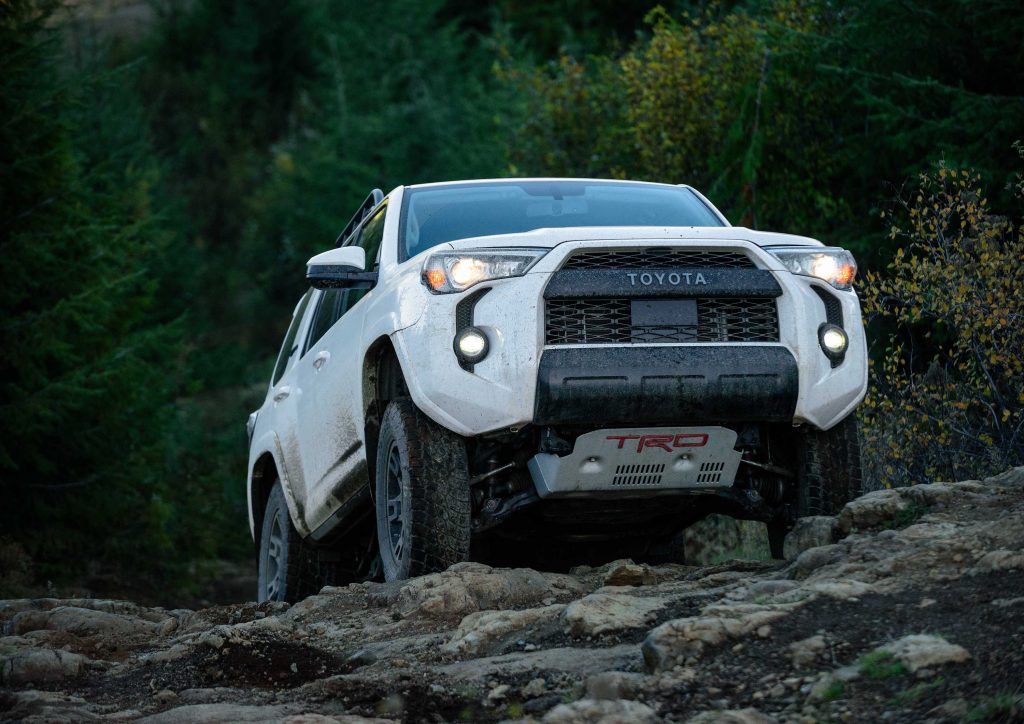 I have been contemplating how I am managing social distancing in the age of coronavirus and have concluded that I am handling this all wrong. Instead of being cooped up in my home near the beach that I’m not allowed on, near the restaurant that no longer allows me into their dining room and the store that only permits me to shop online, I should have taken a truly capable SUV and trotted off to a remote cabin in the wilderness.

As long as I am isolated, why not do it someplace peaceful and bucolic?

But I would need a vehicle to get me there, and alas, I thought of this far too late. Before America became an alternative version of life prison sentence without parole, I had already sampled the 2020 Toyota 4Runner TRD Pro midsize sport utility vehicle. And given its capabilities, it would make the perfect escape vehicle. After all, in a marketplace riddled with SUV pretenders, the 2020 Toyota 4Runner TRD Pro remains what it always has been: an honest, unpretentious body-on-frame sport utility vehicle.

That makes the 4Runner somewhat of an anomaly, a model out of its time, but eminently timeless because of it. In that regard, it’s like a four-door Jeep Wrangler, albeit without the decades-long military heritage, fold-down windshield and removable doors.

And like the Wrangler, its long-lived durability doesn’t come cheap, with prices starting at $36,120. So let’s hope you still have an income to cover those monthly payments.

If you’re familiar with the 4Runner, you’ll know that its 4.0-liter V-6 engine and five-speed automatic transmission routes 270 horsepower through the rear wheels or all four. If you choose the latter, you get a choice of part-time four-wheel drive with a two-speed transfer case and a selectable low range or, on pricier models, a full-time multi-mode four-wheel drive system with a two-speed transfer case and locking center differential. The system uses a locking Torsen center differential activated through a three-mode, console-mounted switch. It normally supplies 40 percent of the power to the front wheels, 60 to the rear. If the wheels slip, the Torsen differential changes the split to 30/70. If this happened while cornering, the split changes to 53/47. And like the Wrangler, there are some true anachronistic touches, such as the tailgate window that can be raised and lowered.

But there are updates for the new model year.

That said, there are a number of trim levels, starting with a rear-wheel drive SR5, and climbing through TRD Off-Road, TRD Off-Road Premium, Limited, and TRD Pro as well as Venture and Nightshade special editions.

Toyota offered up the TRD Pro, the most expensive 4Runner offered, as well as the most capable. Last year, this trim got some significant upgrades, the most crucial being an all-new suspension package with 2.5-inch Fox Internal Bypass Shocks for athletic off-road performance without sacrificing on-road handling. The Pro also got additional standard equipment, including a TRD Roof Rack, JBL premium audio system, moon roof, and a revised front skid plate with red TRD lettering as well as a smart key ignition system with push-button ignition and a new cat back exhaust that supplies a menacing soundtrack to any off-road adventures.

Despite the changes, the 4Runner remains what it has always been: an incredibly capable SUV that trades some on-road comfort for off-road agility. That said, it’s not nearly as uncomfortable as you might think, thanks to the suspension revisions that tame excessive body motions, although you will notice them over bumps and in corners because it is fairly firm. The V-6 is loaded with torque, allowing for a 5,000-pound towing capacity, but it makes a coarse sound when pushed, something the cat back exhaust helps disguise.

As you’d expect, the 9.5-inch ground clearance that makes it such an off-road champ means you have a very high step-in height. Once seated, you’ll find the cabin isn’t very tall, so you’re sitting close to the vehicle’s floor. Legroom is good for the two rows. A third row is optional, but its small size makes it practically useless. Besides, when in use it shrinks available cargo space to 9 cubic feet. And for a vehicle with this sort of price tag, the interior feels like that of a vehicle that costs half the price due to a lot of hard plastic surfaces.

Still, the 4Runner’s ruggedness along with Toyota’s legendary reliability make this SUV the real deal; one that will last a long time, longer than many of its faux competitors.