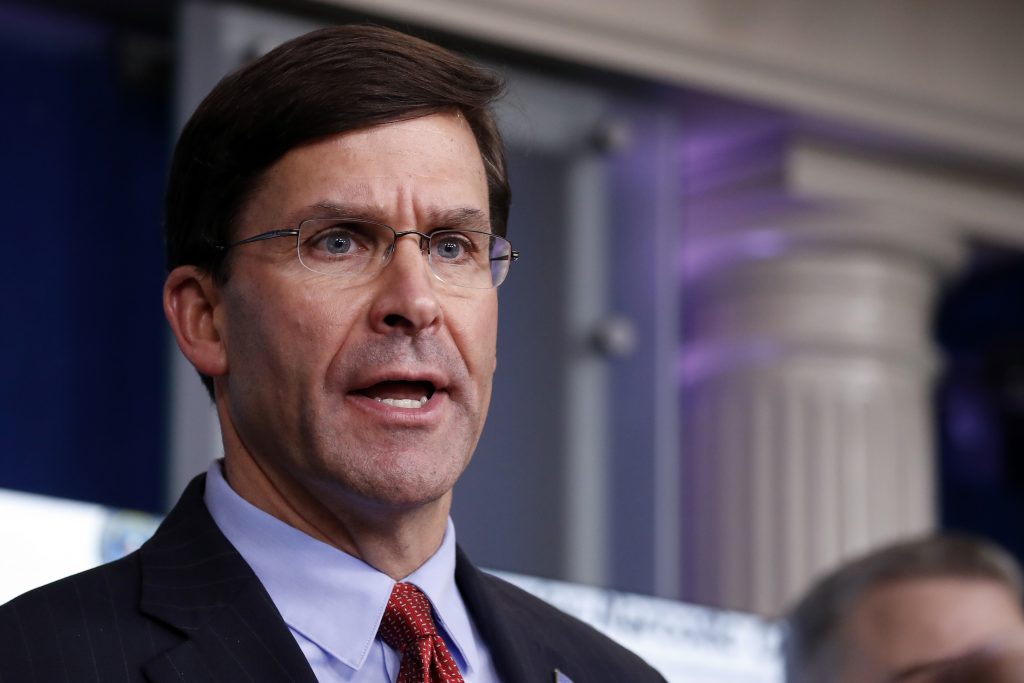 Defense Secretary Mark Esper is traveling beyond Washington for the first time in nearly two months as he looks to highlight and defend a Pentagon approach to fighting the coronavirus pandemic that some Senate Democrats have criticized as slow and disjointed.

Esper was flying Thursday to the headquarters of U.S. Northern Command in Colorado Springs, Colorado, to meet with Gen. Terrence O’Shaughnessy, who is spearheading the military’s support for civilian agencies combating the virus. It is Esper’s first trip beyond Washington since he visited Norfolk, Virginia, in late March to join President Donald Trump in sending off a Navy hospital ship.

The visit comes as President Trump pushes for a reopening of the country and for demonstrations of the administration’s shift from crisis management to rebooting a battered economy. Trump ended his isolation in the White House with a trip to Arizona on Tuesday to visit a face mask factory, and Vice President Mike Pence has made several recent trips.

Even as he begins to venture out to visit commanders and troops after weeks of being cooped up in the Pentagon, Esper has stressed that the military cannot expect to resume business as usual any time soon. He hopes to ease military travel and training restrictions by summer, but such steps will be gradual.

“I think that we will be in a new type of normal for a period of time, measured in months at least, and we’re going to take it one step at a time to make sure we do everything possible to protect our people,” he said Tuesday.

Esper’s trip comes a week after 10 Senate Democrats, including former presidential candidates Elizabeth Warren of Massachusetts and Amy Klobuchar of Minnesota, complained that he has taken a slow and disjointed approach to the coronavirus problem. In a letter to Esper, they said he may have put politics ahead of servicemembers’ health and that he failed to issue coherent guidance to military commanders. They demanded answers by next week to a range of questions about virus testing and steps to mitigate the virus’s spread.

Esper said Tuesday he was disappointed by the letter, asserting that it contained statements that were false or misleading. He said he has spoken to governors of the states represented by the senators who signed the letter, and that every governor thanked him and praised the Pentagon’s performance.

Esper has regularly asserted that the Pentagon has been “ahead of the curve” in dealing with the pandemic, starting with his decision to begin implementing a pandemic plan on Feb. 1. Support to civilian authorities has been just one aspect of the Pentagon’s response. It also has scaled back training, reduced face-to-face recruiting and largely stopped deploying new forces abroad.

These and other measures aimed at protecting the health of the force have had degrees of success, despite major setbacks such as a virus outbreak aboard the aircraft carrier USS Theodore Roosevelt that has sidelined the ship in Guam for weeks, creating turmoil among Navy leadership and taken the life of one sailor.

After a buildup of military support for the Federal Emergency Management Agency and the Department of Health and Human Services, as well as state and local governments, the active-duty military’s role is now lessening.

The hospital ship USNS Comfort returned to its home port in Norfolk, Virginia, on Saturday after 31 days on station in New York harbor. A second Navy hospital ship, the USNS Mercy, is likely to depart Los Angeles, where it has been stationed since late March, “in the coming weeks,” Esper said Monday.

Military medical specialists have played a key role in hospitals in hard-hit New York City and elsewhere, but their numbers are declining. A little over a week ago, 4,400 such specialists were deployed nationwide in civilian medical facilities; on Wednesday the Pentagon said their number had shrunk to 2,600.

Also, military expeditionary medical facilities that were set up in Texas and Louisiana are being returned to Naval Air Station Jacksonville in Florida this week. Some medical facilities set up by the Army Corps of Engineers that turned out not to be needed may be kept on standby in case of a resurgence of the coronavirus later in the year. Esper has not spoken in detail about preparations the Pentagon may be making to remain ready and supplied for follow-on missions during a resurgence.

The National Guard under state governors’ control is still helping across the country with more than 46,000 on active duty.

“As the situation evolves, we will continue to remain agile, flexible and responsive to stay ahead of the needs of state and local authorities across the country,” Esper told reporters Tuesday. “From the beginning of the outbreak, I have made protecting our troops, department civilians and their families a top priority.”