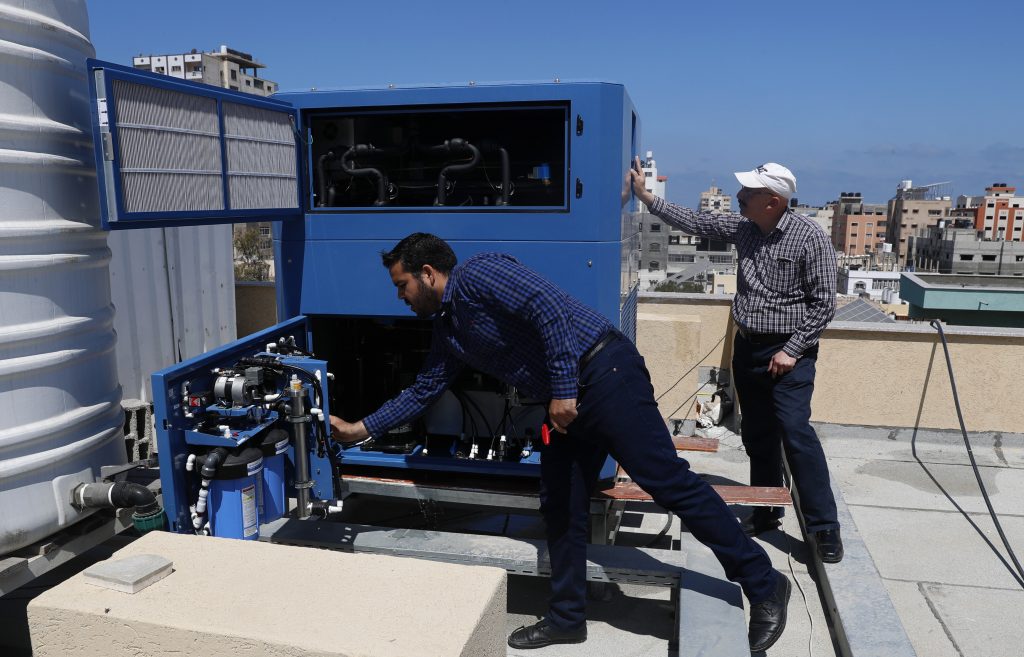 A Georgian-Israeli billionaire believes he has found a solution to the Gaza Strip’s chronic water crisis.

Michael Mirilashvili wants to deliver hundreds of generators that produce drinking water out of thin air. His company, Watergen, sent a machine to a Gaza hospital last week in a rare case of Israeli-Palestinian cooperation in the Hamas-ruled enclave.

Gaza relies on an aquifer as its main source of potable water. But over-extraction has allowed sea water to seep in, rendering 97% of the area’s water undrinkable.

In an interview with The Associated Press, Mirilashvili said he wants to send more water generators to Gaza “because they are our neighbors and it’s a great pity to look at them suffering from such severe water shortages.”

He spoke days after one of his machines was installed on the roof of the Al-Rantisi Medical Center in Gaza City. Just a day after delivery, the generator, a large blue cube roughly the size of a vending machine, began producing cold, clean water for the hospital’s pediatric cancer ward.

Most of Gaza’s households buy water from private vendors who desalinate water at small-scale stations. But experts warn this water is impure. UNICEF estimates two-thirds of this water is already contaminated by the time it is delivered.

The children undergoing cancer treatment at the Gaza hospital need clean food and water because their immune system has been compromised, said Nima Ashour of the Palestine Children’s Relief Fund, a U.S.-based charity that runs the pediatric department.

The dire shortage of clean water makes the Watergen machine “very important” for the hospital, she said.

The Watergen device runs on electricity. But because of frequent power outages, the machine will soon be connected to solar panels. In the winter, the device can be hooked up to conventional power supplies.

Functioning like a dehumidifier, the machine extracts moisture from the air and converts it into drinking water. The machine sent to the Gaza hospital is a medium-sized model and generates about 800 liters, or over 200 gallons, a day. Watergen says its largest generators can provide clean drinking water to thousands of people. The company has also developed a new consumer version for home use.

Watergen’s technology was initially developed for military use in 2009, but it shifted gears to civilian markets after Mirilashvili bought the company in 2017.

Mirilashvili believes that he could deliver enough water generators to meet the territory’s daily drinking water needs within a year. The generators can cost tens of thousands of dollars apiece. Watergen, which donated the new machine to the hospital, said it is prepared to sell additional devices to Gaza at a “substantial discount.”

In the 2000s, he spent eight years behind bars in Russia on kidnapping charges he dismissed as fabricated. The European Court of Human Rights ruled in 2008 that he didn’t receive a fair trial, and he was subsequently released. He now spends much of his time in Israel, where he is a prominent philanthropist.

Watergen has deployed its machines in over 60 countries, both developing countries lacking water infrastructure, such as India and Uzbekistan, and in areas of developed countries suffering from drought, such as California.

Mirilashvili donated the generator to the hospital after he was approached by Yerushalayim-based Palestinian businessman Fayez Husseini, a former chief executive of Palestinian mobile phone company Wataniya. Husseini now owns a small firm that promotes water and solar projects in Gaza.

Husseini said he learned about the hospital’s critical situation in February while working on another project with the Palestine Children’s Relief Fund. He said he looked at various options and concluded the Watergen machine provided the fastest and simplest solution.

Bassem Naim, a Hamas official who was not familiar with the project, said he believes it’s all right to cooperate with Israel in humanitarian matters that affect the life of Gazans.

Husseini said that for this project, Israeli authorities gave quick approval to move the generator across the border. Although there were no dealings with Hamas authorities in Gaza, he said he did not expect any trouble there either.