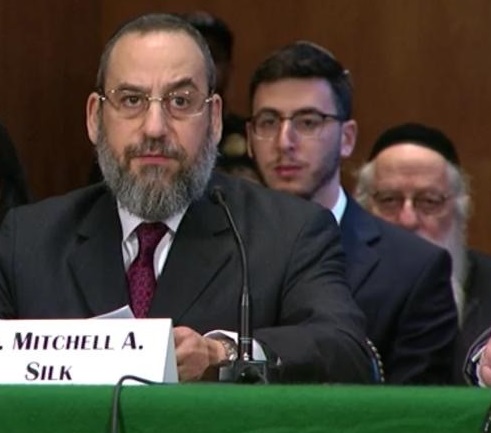 Boro Park’s own, Moyshe (Mitchell) Silk has been confirmed to officially serve as an assistant secretary of the US Treasury Department for international markets. The appointment makes him one of the few Orthodox Jews, and most likely the first Chassidic one to reach such as prominent post in federal government.

“It is an honor to serve and I am looking forward to continuing to support the President and Secretary Mnuchin to pursue growth and stability in the international financial markets during this critical time for the country,” Mr. Silk told Hamodia a day following the vote.

Following a career as a corporate lawyer specializing in energy, infrastructure and China, Silk joined the Treasury Department’s Office of International Affairs in 2017. Since then, he has spent a much time trotting the globe in an effort to represent and promote U.S. financial interests abroad.

This past summer he began serving as acting assistant secretary, when the previous occupant, Heath Tarbert, was picked by the Trump administration to be Chairman of the Commodity Futures Trading Commission.

Committee hearings on Mr. Silk’s appointment were held in November and on Tuesday, the full Senate unanimously confirmed him to the post.

After the confirmation, Secretary of the Treasury Steve Mnuchin tweeted, “Congratulations to Mitchell Silk, who was confirmed today as Assistant Secretary for International Markets. I know he will continue to serve @USTreasury and the nation well.”