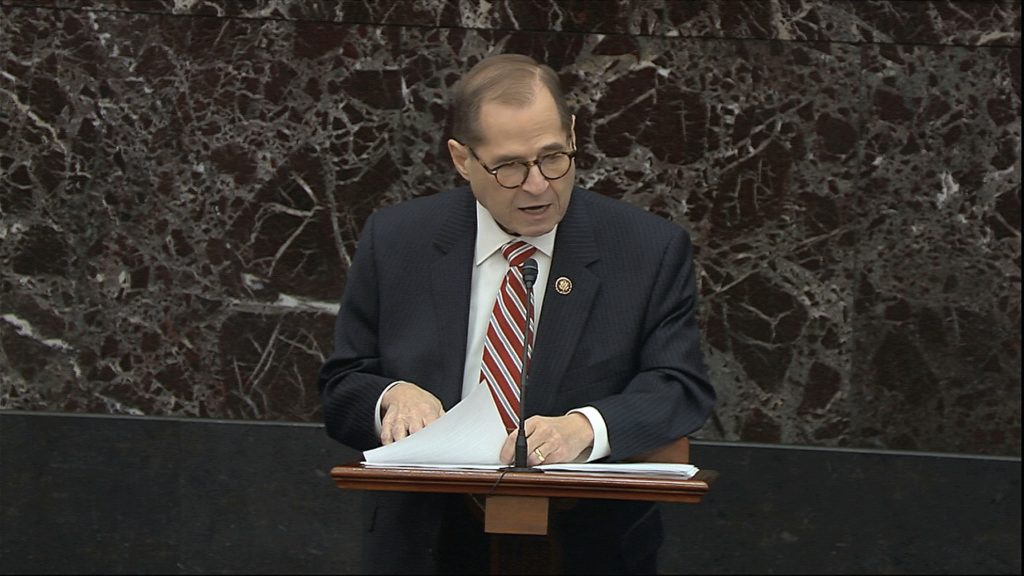 House impeachment managers, led by Rep. Adam Schiff, D-Calif., began the second day of their opening arguments against President Trump by focusing on alleged abuse of power, one of the two articles of impeachment approved last month by the House.

The Senate reconvened Thursday afternoon for the historic trial – only the third of a sitting U.S. president – focused on Trump’s conduct toward Ukraine. The Democratic-led House has also charged Trump with obstruction of Congress. Trump’s defense is expected to begin its presentation Saturday.

The crux of the House case is the allegation that Trump withheld military aid and a White House meeting to pressure Ukraine to investigate Joe Biden, a political rival, as well as his son Hunter Biden, who served on the board of a Ukrainian gas company while his father was vice president.

House Judiciary Committee Chairman Jerrold Nadler, D-N.Y., one of the impeachment managers, responded to the criticism that Trump’s actions don’t amount to a “high crime” by quoting one of the president’s closest allies: Sen. Lindsey Graham, R-S.C.

Nadler showed a 21-year-old video clip of Graham, who then served as a House manager during the 1999 Clinton impeachment, explaining what he understood the Founders to have meant by “high crimes.”

“What’s a high crime? How about if an important person hurts somebody of low means? It’s not very scholarly, but I think it’s the truth,” then-Rep. Graham said. “I think that’s what they meant by high crimes. It doesn’t have to be a crime. It’s just when you start using your office, and you’re acting in a way that hurts people, you’ve committed a high crime.”

Reporters who were in the Senate chamber at the time noted on Twitter that Graham was absent from the room when the vintage clip was played.

Earlier, while arguing that a crime is not necessary to impeach a president, Nadler cited the past words of two Trump allies: Alan Dershowitz, who is serving on the president’s impeachment team, and Attorney General William Barr.

Nadler played a video of Dershowitz speaking in 1998 during the impeachment proceedings of President Bill Clinton, in which Dershowitz said: “It certainly doesn’t have to be a crime if you have somebody who completely corrupts the office of president and who abuses trust and poses great danger to our liberty. You don’t need a technical crime.”

Dershowitz has since changed his view and plans to argue as part of Trump’s defense that House Democrats are wrongly trying to remove him from office without an underlying crime.

Nadler then cited Barr’s view, voiced 18 months ago, that “presidents cannot be indicted or criminally investigated.”

“But that’s OK, because they can be impeached,” Nadler said, recounting Barr’s view. “That’s the safeguard.”

Nadler began laying out the case against Trump on the charge of abuse of power and said the White House lawyers cannot, and will not, refute the evidence.

“Not that the active solicitation itself, just the ask, constitutes an abuse of power,” Nadler said. “But President Trump went further in order to secure his favor from Ukraine. He withheld two official acts of immense value.”

Nadler asked the senators to listen closely to the White House’s defense, which he predicted will not include “a refutation of the evidence.”

Nadler speculated that the White House lawyers will focus on complaints about process and the managers’ motives, but not the facts of the testimony.

“If the president had any exculpatory witnesses, even a single one, he would be demanding their appearance here instead of urging you not to permit additional witnesses,” Nadler said.

Meanwhile, a few minutes into Thursday’s proceedings, Trump weighed in via Twitter on the issue of whether the Senate should call witnesses.

He argued that Democrats are opposed to a deal because they are afraid of what the GOP-called witnesses would reveal.

“The Democrats don’t want a Witness Trade because Shifty Schiff, the Biden’s, the fake Whistleblower (& his lawyer), the second Whistleblower (who vanished after I released the Transcripts), the so-called ‘informer’, & many other Democrat disasters, would be a BIG problem for them!” he tweeted.

Democrats have repeatedly said they oppose a witness trade because they believe the witnesses Republicans would like to call are not relevant to the issue of Trump’s alleged misconduct.

Graham told reporters Thursday that Hunter Biden’s service on the board of a Ukrainian gas company deserves more scrutiny. But he said it would be better to handle that through the “oversight” process than by calling him as a witness in Trump’s Senate trial.

“I want to end this thing sooner rather than later,” Graham said of the Senate trial. “I don’t want to turn it into a circus. … I’m not going to use my vote to extend the trial.”

Hunter Biden’s membership on the board of Burisma, a company scrutinized for corruption, coincided with his father’s service as vice president. Joe Biden’s portfolio included Ukraine.

“Nobody has done much looking at what happened in the Ukraine about Hunter Biden,” said Graham, who has previously suggested the Judiciary Committee would look into the matter.