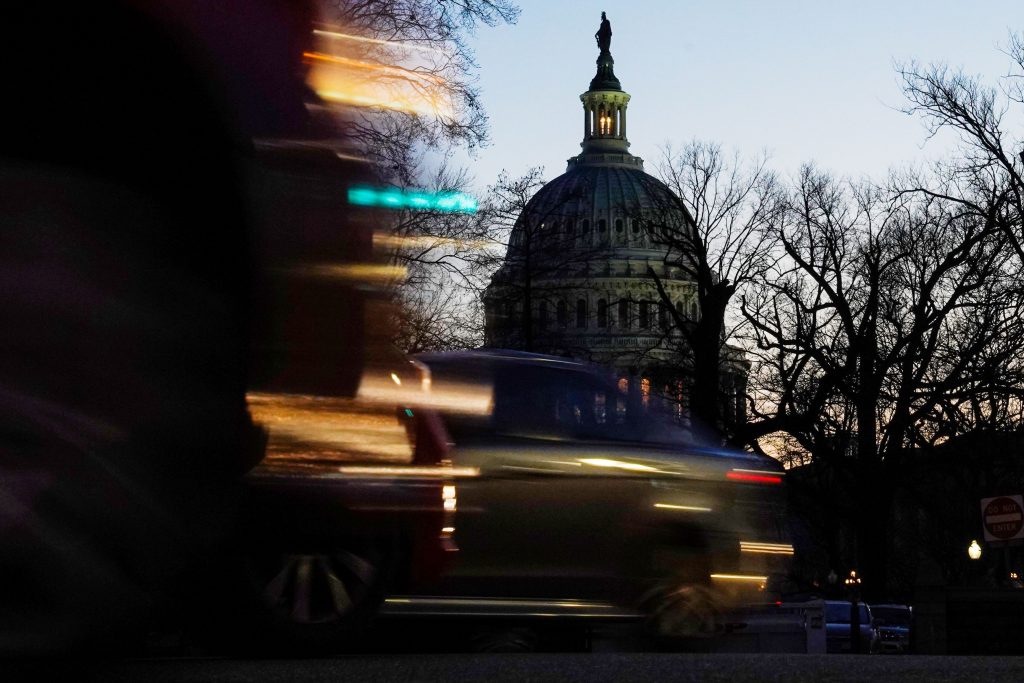 Democrats planned to plow ahead on Thursday at President Donald Trump‘s impeachment trial with their arguments for removing him from office, but Republicans showed no signs of softening their resistance to the Democratic case.

Representative Adam Schiff and other Democratic impeachment managers are pressing their argument that Trump should be convicted of two articles of impeachment passed by the House last month – abuse of power and obstruction of Congress – for pressuring Ukraine to investigate Democratic rival Joe Biden last year, and impeding the inquiry into the matter.

Blocked so far in their drive to persuade the Republican-led Senate to let them call new witnesses, Democrats are using their time instead to outline an extensive narrative, complete with video clips, based on the testimony presented during hearings in the Democratic-controlled House of Representatives.

The case focuses on efforts by Trump and his aides to pressure Ukrainian President Volodymyr Zelenskiy to investigate Biden, a leading 2020 Democratic presidential contender, and Biden’s son, on unsubstantiated corruption charges as well as a discredited theory that Ukraine, not Russia, meddled in the 2016 presidential election. Nearly $400 million in U.S. military aid to Ukraine was frozen during that period.

Trump denies wrongdoing and his fellow Republicans, who control the Senate, say his behavior does not fit the description of “high crimes and misdemeanors” outlined in the U.S. Constitution as a reason to oust a president.

He is almost certain to be acquitted by the 100-member Senate, where a two-thirds majority of those present is needed to remove him from office. But the case could help determine whether Trump wins a second term in November’s election.

Democrats have two more days to make their opening arguments. Trump‘s defense team, a group of White House lawyers and outside counsel, will have three days for rebuttal.

Trump lawyer Jay Sekulow said it was unclear whether the Trump defense would need all three days.

“We will make a determination on our presentation based on what we are responding to and based on our affirmative case,” Sekulow said. “I don’t know if it will take 10 hours, 14 hours, 24 hours or six hours.”

Democrats said they will focus on the Constitution, the impeachment articles and the facts relating to them on Thursday.

“Now we’re going to start talking about the law, the impeachment articles and bringing together the facts and the chronology here,” Democratic Representative Jason Crow, one of the impeachment managers presenting the case, said on CNN.

So far, the House impeachment managers’ presentation appears to have had little impact on the Senate’s deep partisan split.

“I didn’t hear anything new, at all,” said Republican Senator John Barrasso. He repeated Republican criticism that Democrats are pursuing a politically driven effort to oust Trump from office before the November presidential election.

But Democratic Senator Chris Van Hollen said: “Anyone following this testimony will see that the truth is right there in plain sight. It’s very clear that President Trump used all the agencies of the federal government to pursue his scheme.”

Senator John Kennedy, a Republican close to Trump, was listening to what he called Schiff’s “eloquent” presentation.

“Most if not all senators are hearing the prosecution and the case of the defense for the first time,” Kennedy said, adding that most senators had not read a transcript of the proceedings from the House impeachment investigation. “Senators, because they’ve been busy being senators, have not heard the case.”

Trump, who arrived back in Washington on Wednesday night from the World Economic Forum in Davos, Switzerland, condemned the proceedings as “unfair & corrupt” in a Twitter post on Thursday.