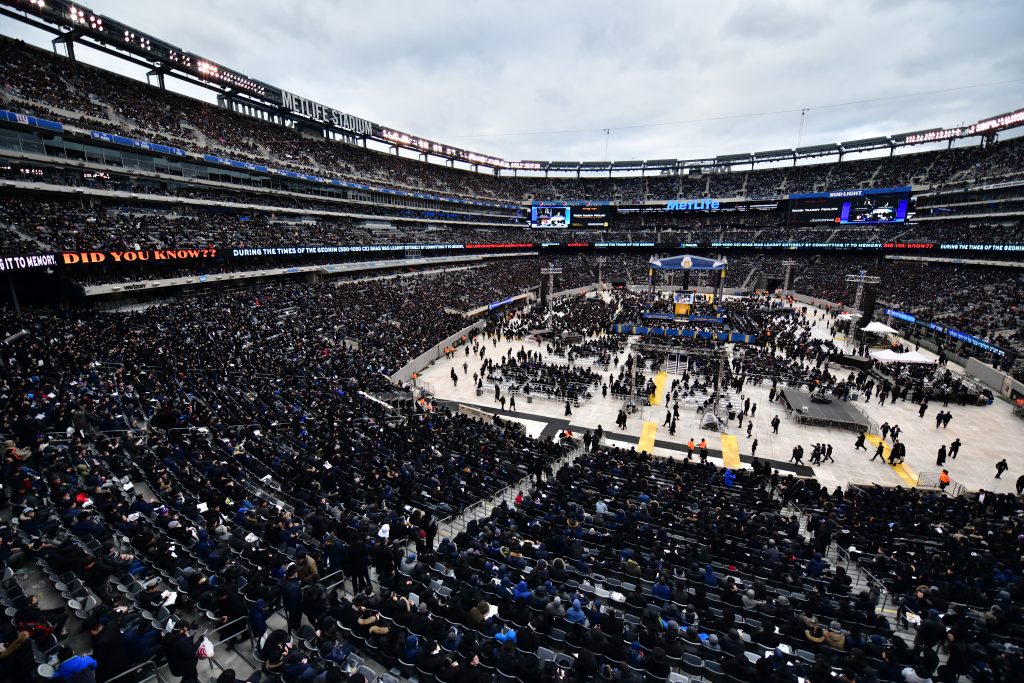 Maybe you know the old Yiddish joke? Back in prewar Minsk, Shmerel and Berel are having a conversation. During a pause, Shmerel suddenly remembers a bit of bad news he has to relate.

“Did you hear about Yankel the barber in Pinsk?”

“Oy!” exclaims Berel, “You mean Yankel, with the huge round nose?”

“Yankel who has only one eye?” Again, a confirmation.

“Yankel with that big scar across his cheek and the pimples?!” Another sad nod.

The story came back to me at the Siyum HaShas. Let me explain.

When people, as so many did, came over to me in various places to congratulate me, a veteran Agudath Israel staff member for a quarter of a century, for the amazing event, I responded, entirely honestly, that my main role was standing out of the way of the many unbelievably dedicated and talented people who did the real work, like the Agudah’s executive staff, the young women who spent days and late nights taking orders and processing tickets, the devoted community askanim and technical facilitators.

(Actually, I do take credit for offering the idea, a year or so before the Siyum, of including chemical hand warmers in the swag bags. You’re welcome.)

I wasn’t even really at the Siyum, at least not as part of the crowd. My perch was in the press box, high above the gathering, a floor dedicated to members of the media, with whom I was charged to interact.

I answered many questions but mostly just steered representatives of the Fourth Estate to members of the tzibbur whom they could interview about Daf Yomi and the Siyum.

One of my few on-camera moments, as it happened, was responding to a German television crew’s question, born of recent events, about what the Siyum means in the context of all the recent anti-Semitic violence. I straightforwardly pointed out that Jews are long accustomed to hatred and adversaries, and are long trained in perseverance. I wonder how that played in Munich.

It was, though, when I watched several reporters intone into their microphones about how so many Jews “read a page of Talmud” daily that Shmerel and Berel appeared before my mind’s eye.

Because the joke about them, of course, is a pointed one. And its point is that we Jews see things differently from other people. To us, beauty is truly anything but skin deep.

And so, when we look at a true Daf Yomi talmid, we don’t see someone “reading a page” of a text. We see someone who, for 2,711 days straight, has engaged not only with very complex material, but with holiness itself.

Where a reporter saw “reading,” we saw reverence.

Many journalists wanted to tie their stories about the Siyum into a narrative about the aforementioned violence against Jews we’ve endured of late. They saw “a flare-up of anti-Semitism.”

Jewish eyes, though, saw the latest manifestation of “Esav sonei l’Yaakov,” the wages of galus and a message that we need to improve our avodas Hashem.

During a particularly poignant part of the Siyum program, tribute was paid to a man named Mendy Rosenberg, who, despite being severely limited by amyotrophic lateral sclerosis (ALS), successfully undertook to complete a full Daf Yomi cycle, despite a prognosis that didn’t allow him anywhere near the time needed, and, despite eventually having to communicate with his chavrusa through eye movements alone. Reporters saw a broken man doing the best he could. Jewish eyes saw an amazing hero, a gibor chayil and powerful role model for mesirus nefesh.

And when a group of Holocaust survivors were introduced to the approximately 90,000 people at MetLife Stadium and to countless others in venues across the country and the world linked to the proceedings, the media saw the last human vestiges of a world that once was. Jewish eyes, though, saw superhuman connections to our mesorah, which they carried out with them to us from the furnace of Churban Europa.

When the camera was aimed at the Masmidei HaSiyum youngsters, who had participated in the Siyum by undertaking limudim of Gemara, Mishnayos or Chumash, the reporters saw lovable little boys. We saw nothing less than the Jewish future, be”H a bright one.

And, finally, when the observers from the outside saw, and dutifully reported on, the “record crowd” in the stadium — not only were the stands fairly full, but the playing field held many more people, including the Rabbanim on the dais, Daf Yomi Maggidei Shiur and many others — Jewish eyes saw, well, Klal Yisrael.

No, not all of it, but enough of it to perceive something else invisible to many observers: the vibrancy, dedication and passion of the collective Jewish neshamah.