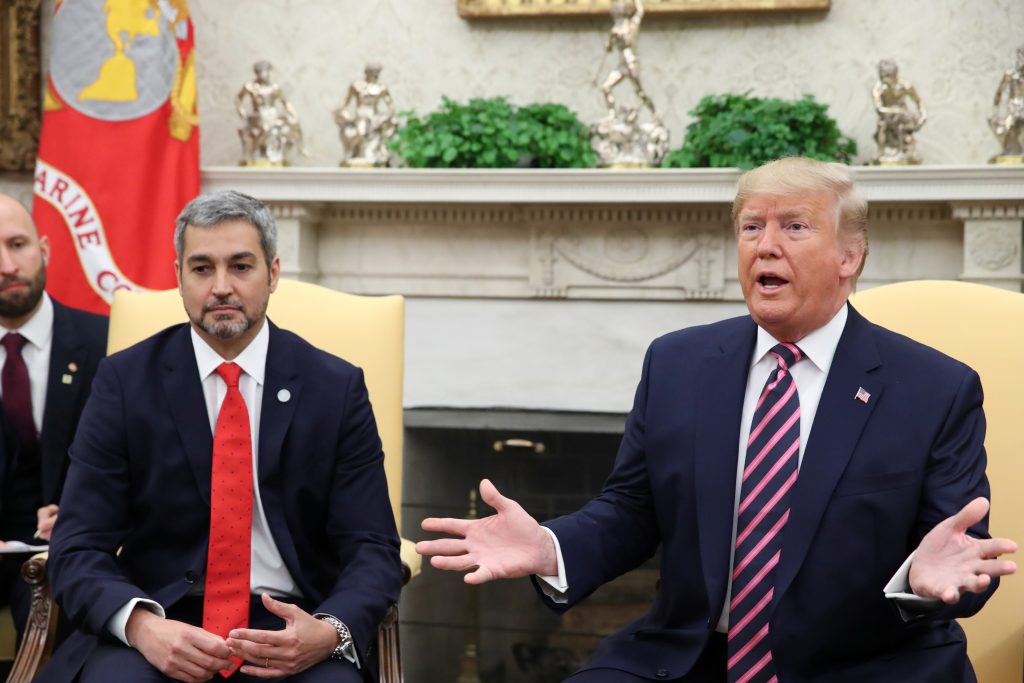 President Donald Trump declared Friday’s House committee vote to impeach him ”an embarrassment to our country” and refused to back away from the charge that first ensnared him in the scandal. Almost simultaneous to the vote, Rudy Giuliani, the president’s personal lawyer, turned up at the White House.

With a vote by the full House expected next week, Trump declared in the Oval Office that the Democrats had “made absolute fools of themselves” by moving ahead with impeachment. Trump stands poised to be the third president in history to be impeached, though it is all but certain he will not be removed from office by the Republican-controlled Senate.

”You’re trivializing impeachment when you use it for absolutely nothing other than trying for political gain,” Trump said as he sat alongside the president of Paraguay. ”It’s a sad thing for the country but a good thing for me politically.”

Trump’s latest pushback on impeachment came a short time after Giuliani turned up at the White House. Giuliani, who has been deeply involved in the Ukraine dealings at the heart of the impeachment inquiry, has been expected to meet with Trump, who requested a briefing from the former New York City mayor on his recent trip to Kyiv.

Trump also has urged Giuliani to inform the Justice Department and Republican senators about what he discovered in Ukraine. Giuliani did not immediately respond to a request for comment but tweeted that “The American people have already made up their mind on this #ImpeachmentScam. This is a SMOKESCREEN for the Obama-Biden administration’s corruption. It will soon be proven.”

A White House spokesman did not immediately confirm whether Trump met with Giuliani. But Kellyanne Conway, senior counselor to the president, played down the visit.

Still, Giuliani’s visit to the White House underscored how Trump has not backed away from the conspiracy theories and unfounded allegations of corruption that led to the impeachment inquiry imperiling his presidency. House Democrats moved to impeach him after it was revealed that military aid to Ukraine was delayed as Trump pushed Kyiv to investigate his potential Democratic opponent in the 2020 election, former Vice President Joe Biden.

Giuliani’s trip last week prompted concern from many White House officials, some of whom blame the lawyer for ensnaring Trump in the Ukraine affair. Giuliani told The Associated Press this week that he was preparing a report but would not reveal its contents.

Trump, who stands poised to be the first impeached president to run for reelection, insisted impeachment may be a political win. His campaign manager, Brad Parscale, added, “The baseless, sham impeachment is just out-of-control partisan politics and the American people are rejecting it.”

As for Giuliani, the former mayor has persisted in pushing the belief — previously held only on the fringes of the conservative movement — that Ukraine may have attempted to interfere in the 2016 election. There is no evidence that happened.

The former mayor also wanted to bring attention to the work that Biden’s son Hunter did in Ukraine and urged Trump to demand Kyiv investigate his political foe.

Even as impeachment swirled, Giuliani stunned Washington by traveling to Ukraine this month to further his probe. The journey drew condemnation from Democrats and some scorn from Republicans and White House aides, many of whom believed the trip drew unwanted scrutiny ahead of the impeachment vote. Trump, though, showed no concern.

“He says he has a lot of good information,” Trump said Saturday. “I hear he has found plenty.”

Sen. Lindsey Graham, R-S.C., a staunch Trump ally, has said he had no plans for Giuliani to appear before the Senate Judiciary Committee, which has launched an inquiry into Joe Biden and his communications with Ukrainian officials. And Attorney General William Barr and Secretary of State Mike Pompeo both have told West Wing aides that the attention-seeking former mayor had become a liability to Trump.

While Trump has at times grown frustrated with Giuliani, the president has told people close to him that he appreciates the former mayor’s willingness to defend him and his aggressive pursuit of corruption.

Giuliani returned Saturday from a trip that took him to Ukraine, Hungary and Austria, where he said he was looking for documents and witnesses to support unproven claims he has made about Hunter Biden and Ukraine’s role in the 2016 election.