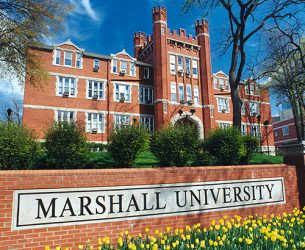 Officials at Marshall University in West Virginia have condemned the defacement of on-campus posters with swastikas.

Two copies of a Department of History course poster had the symbols drawn over the face of a public figure, officials told The Herald-Dispatch.

The vandalism was found on Thursday, the same day that the West Virginia Department of Military Affairs and Public Safety released a photo showing correction officer trainees giving what appears to be the Nazi salute. State officials quickly suspended some employees and the governor ordered the firing of those involved. It wasn’t immediately clear where the trainees’ photo was taken, or how far that location is from Marshall.

The incident at Marshall brought a swift rebuke from President Jerome Gilbert.

“We teach our students that hate is not welcome,” he said. “Any attempt to target or intimidate anyone, or to create a hostile environment, will not be tolerated.”