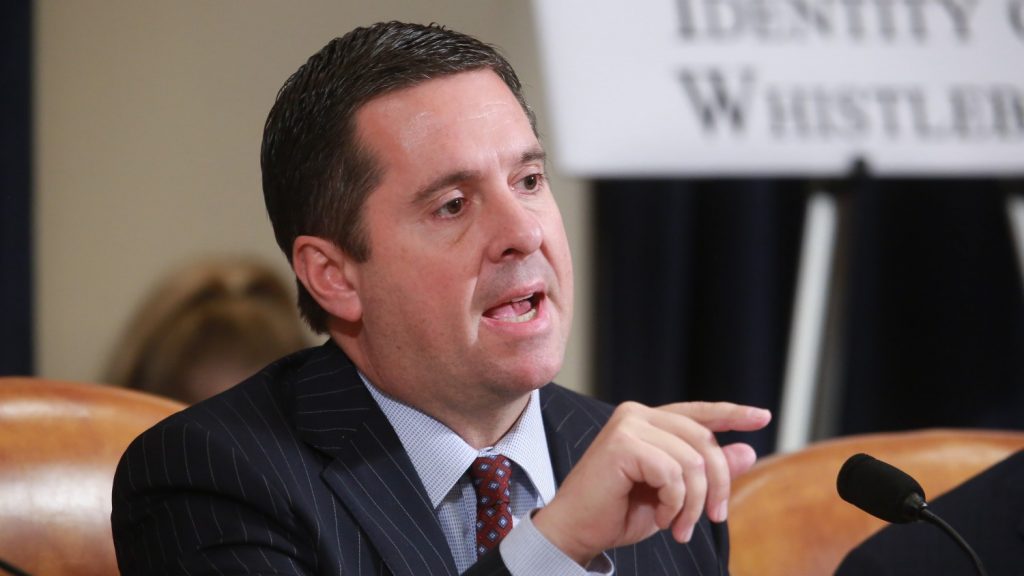 A top House Democrat told reporters Wednesday that his party could explore disciplining Rep. Devin Nunes over the California Republican’s involvement with officials who now are at the center of President Donald Trump’s impeachment.

Rep. Steny Hoyer, the No. 2 Democrat in the House of Representatives, said he would talk to members about the potential for disciplining Nunes after Democrats released phone records showing that Nunes was in contact with Trump attorney Rudy Giuliani and one of Giuliani’s now-indicted associates who allegedly pressed for the removal of the U.S. ambassador to Ukraine.

Giuliani and his associate Lev Parnas are central figures in the impeachment inquiry, who allegedly worked outside of formal diplomatic channels to advance Trump’s political interests.

Nunes’ phone calls with them were disclosed in the House Intelligence Committee’s impeachment report, in which Democrats argue that President Trump improperly pressured Ukraine to announce investigations that would benefit him politically.

“I think there are serious questions that have been raised by Mr. Nunes’ actions,” Hoyer said. “What actions ought to be taken, if any, I want to have input from other people before I opine about what ought to be done.”

He clarified “I will be doing that” when asked what the status was, implying he had not yet begun these conversations.

Hoyer’s comments echo recent remarks from other senior-ranking Democrats who’ve called for inquiries into Nunes’ reported connections with Parnas, who was indicted by federal prosecutors in October and charged with campaign finance violations. Prosecutors also allege that Parnas lobbied a congressman to remove former U.S. Ambassador to Ukraine Marie Yovanovitch.

House Armed Services Committee Chairman Rep. Adam Smith, D-Wash., last month said it was “quite likely” that Nunes would face an ethics inquiry. Rep. Jackie Speier, D-Calif., also wanted an investigation into a report that Nunes sought to set up a meeting with Ukrainian officials.

Two Intelligence Committee Democrats, Reps. Eric Swalwell, D-Calif., and Mike Quigley, D-Illinois, said the decision was better left to House leadership or the House Ethics Committee while they were focused on impeachment.

The second-highest Republican on Intelligence, Rep. Mike Conaway, R-Texas, said he had “no comment” when asked about Hoyer’s comments by McClatchy.

Parnas has said through attorneys that he is willing to testify before Congress that he was organizing meetings in Ukraine at Nunes’ request to generate information that would help Trump’s reelection campaign.

Nunes, according to the phone records, had at least three phone calls with Giuliani on April 10, in addition to two calls with Parnas on April 12, which was around the time when a series of opinion articles by conservative journalist John Solomon raised questions about Yovanovitch and ultimately led to her removal.

One of Nunes’ calls with Parnas lasted eight minutes, according to the impeachment report.

Giuliani also called a member of Nunes’ staff, Derek Harvey, on May 8, and a former Nunes staffer, Kashyap “Kash” Patel, who now works on the National Security Council.

In an appearance on Fox News Tuesday night, Nunes said, “Everything I spoke to Rudy Giuliani about is nothing that I wouldn’t care if the American people found out.”

“It’s possible, but I haven’t gone through all my phone records. I don’t really recall that name,” Nunes said. “I remember that name now because he’s been indicted … I’ll go back and check all my records but it seems very unlikely that I would be taking calls from random people.”

Nunes at the hearings repeatedly said House Intelligence Committee Chairman Adam Schiff, D-Calif., should be made to testify about interactions with the government whistleblower whose report triggered the impeachment inquiry.

After the stories about Parnas appeared, California Democrat Swalwell said at a hearing that Nunes “may have actually been projecting. He may be the fact witness if he is working with indicted individuals around our investigation.”

U.S. intelligence agencies have concluded that Russia, not Ukraine, interfered in the 2016 election to “denigrate” Clinton. Special counsel Robert Mueller’s investigation into the election led to 34 criminal indictments, including against 12 Russian nationals who allegedly attempted to hack Democratic Party servers to influence the 2016 election.

Nunes at impeachment hearings repeatedly argued that Trump’s requests to Zelenskiy were legitimate. Nunes previously as chairman of the House Intelligence Committee sought to investigate the origin of Mueller’s investigation, and referred to it as the “Russia hoax.”

The House needs a two-thirds vote to expel one of its own members — a form of punishment rarely used. A majority of the House can censure a member, which essentially serves as a form of public reprimand.

Only the leader of the House Republican caucus — currently Minority Leader Kevin McCarthy, R-Calif. — can remove Nunes from his committees.

McCarthy on Twitter this week praised Nunes. “His dogged search for the truth has led the (House Intelligence Committee) effectively and honorably.”