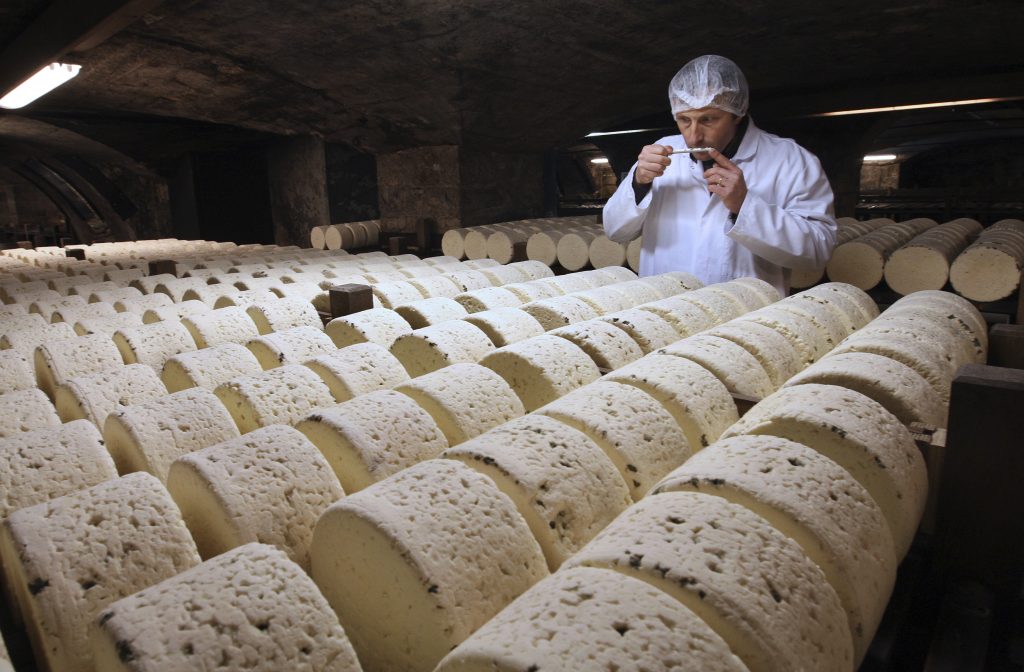 France is bristling at a U.S. threat to slap 100% tariffs on French cheeses, champagne and other products, with the French leader telling President Donald Trump on Tuesday that the move would amount to an attack on all of Europe.

The U.S. Trade Representative proposed the tariffs on $2.4 billion in goods Monday in retaliation for a French tax on global tech giants including Google, Amazon and Facebook.

France’s reaction was swift and robust, with President Emmanuel Macron and his finance minister both warning of a European riposte if the U.S. measure is implemented.

“We’ll see where the discussions lead in the coming weeks, but it will involve a European response,” Macron said in a meeting with Trump on the sidelines of a NATO summit in London. “Because, in effect, it wouldn’t be France that is being sanctioned or attacked but Europe.”

Macron said it’s “not fair” that digital revenues are taxed less than real-life revenues. He said France shouldn’t be singled out for wanting to correct that imbalance with a tax on tech firms.

“My first question is: what will happen with the United Kingdom, which adopted the same tax? For Italy, the same tax? Austria, Spain …,” Macron asked. “If we’re serious, those countries will have to be treated the same way.”

The U.S. move is likely to increase trade tensions between the U.S. and Europe. President Trump said the European Union should “shape up, otherwise things are going to get very tough.”

“I’m not in love with those (tech) companies, but they’re our companies,” Trump said ahead of his meeting with Macron.

French Finance Minister Bruno Le Maire said the U.S. tariff threat is “simply unacceptable. … It’s not the behavior we expect from the United States toward one of its main allies.”

The French tech tax, he said, is aimed at “establishing tax justice.” France wants digital companies to pay their fair share of taxes in countries where they make money instead of using tax havens, and is pushing for an international agreement on the issue.

The problem is pronounced in Europe, where a foreign company can pay most of its taxes in the one EU country where it has its regional base – often a small country like Luxembourg or Ireland that tries to attract multinationals with very low corporate taxes.

Le Maire noted that France will reimburse the tax if the U.S. agrees to the international tax plan.

French wine and cheese producers expressed dismay about being caught in the middle of the battle over digital revenues. Cheese producers warned that the U.S. measure would hit small businesses hardest.

An industry association for pungent Roquefort cheese, among the targeted products, said the 100% tariffs could wipe out the U.S. market – 300 tons a year – for the blue-veined cheese.

“We’re lucky to have a product known around the world but the reverse side of that is that every time there’s a trade dispute, Roquefort is systematically targeted,” said Jerome Faramond, the association president.

Le Maire said France talked this week with the European Commission about EU-wide retaliatory measures if Washington follows through with the tariffs next month.

EU Commission spokesman Daniel Rosario said the EU will seek “immediate discussions with the U.S. on how to solve this issue amicably.”

The U.S tariffs could double the price American consumers pay for French imports and would come on top of a 25% tax on French wine imposed last month over a separate dispute over subsidies to Airbus and Boeing.

France disputes that, saying it targets European and Chinese businesses, too. The tax imposes a 3% annual levy on French revenues of any digital company with yearly global sales worth more than 750 million euros ($830 million) and French revenue exceeding 25 million euros.

The U.S. investigated the French tax under Section 301 of the Trade Act of 1974 — the same provision the Trump administration used last year to probe China’s technology policies, leading to tariffs on more than $360 billion worth of Chinese imports in the biggest trade war since the 1930s.