Community Friday and Motzoei Shabbos at the Agudah Convention
Community 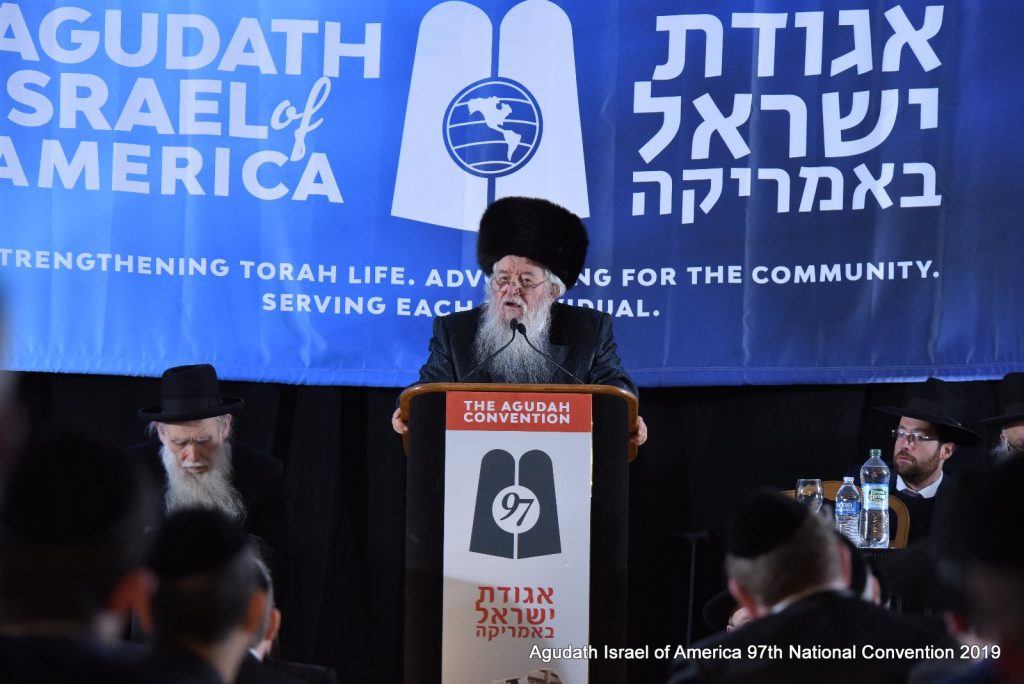 The crowds flowing to the Agudah Convention’s sessions, shiurim, and keynotes yesterday and Friday bore witness to the drive that is apparent even today in the Agudah that Mike Tress founded.

Mendel Tress, Motzoei Shabbos’s keynote chairman, and son of the Agudah hero R’ Elimelech Gavriel “Mike” Tress, put it best when he said, when it comes to avodas Hashem, there is no room for any cheshbonos. Only do the ratzon Hashem. “This was my father’s life’s mission, and this is what I believe he implanted in every fiber of Agudas Yisroel.”

Harav Yaakov Perlow, Novominsker Rebbe and Rosh Agudas Yisroel, noted that in certain ways Klal Yisrael’s growth is phenomenal. “There are more bachurim and yungerleit learning in Lakewood today than in all the pre-war yeshivos of Lita put together.” This was echoed by Rabbi Moshe Tuvia Lieff, Rav of Agudas Yisroel Bais Binyomin, who shared the podium with Harav Sholom Kamenetsky, Rosh Yeshivah Talmudical Yeshiva of Philadelphia, in the Shabbos Mini-Keynote, chaired by Rabbi Yeruchim Silber, director of New York government relations for the Agudah. In that session, Rabbi Lieff noted that Klal Yisrael has grown, in both gashmiyus and ruchniyus, It should fill us with pride to be ehrliche Yidden, he said, and if we can show that pride in our homes and to our children, it will help us raise the next generation to even greater heights.

But, as Harav Perlow added, there are also significant challenges. Chillul Shabbos, unfortunately, has become rampant in Eretz Yisrael, and he reminded those present that the Moetzes Gedolei HaTorah recently proclaimed, in a kol korei, that we, here in the United States, need to be mischazek in shemiras Shabbos in response to this.

Threats to the Klal

There are other issues as well. Harav Berel Povarsky, Rosh Yeshivah Ponovez, Chaver Moetzes Gedolei HaTorah b’Eretz Yisrael, describing the financial straits that Chinuch Atzmai in Eretz Yisroel is experiencing, and the potential consequence of thousands of young children not being able to go to yeshivah, asked for help from b’nei Yisrael in America. And, in the same Motzoei Shabbos keynote session, Rabbi Chaim Dovid Zwiebel, Executive Vice President, Agudath Israel of America, remarked that it’s not just anti-Semitism that is a danger to Klal Yisrael. Religion itself, and religious people, are suffering a tremendous decline in this country.

But the klal faces threats on the individual level, too. Our teens face rejection more than ever before – whether from classmates, from schools, seminaries, in shidduchim, or from bullying. “Rejection hurts, it hurts a lot,” said Matis Miller, LCSW, Founder, Director, and Supervisor of The Center for Cognitive & Behavioral Therapy of New Jersey, in a session titled, “Rejection Hurts: Prevention and Intervention.” If we want to fight the power of the street, said Rabbi Zechariah Wallerstein, Menahel, Ohr Naava, we have to make sure to accept our children.

That’s not always so easy, said Dr. Faye Zakheim, Ph.D., LCSW, Co-Chair United Task Force, Adjunct Assistant Professor, NYU Silver School of Social Work; as today, many times parents are afraid of children. In their session for women, “Since When Have Children Become the Parents,” she and Dr. Norman Blumenthal, Ph.D., OHEL Children’s Home and Family Services, Rabbi Isaac Elchanan Theological Seminary, Yeshiva University, noted that the boundaries between children and their parents have become eroded, and they suggested ideas for closing the gap.

Agudah’s work on the askanus level was also a focus at the convention. During the keynote session, a video highlighting some of the work of four of the regional offices of the Agudah in such areas as school choice funding and fighting anti-Semitic zoning laws was shown.

But some problems are more difficult and need a more holistic approach to combat. The Agudah’s new shidduch initiative – the Compass Shidduch Network, was the subject of a Friday morning session — “Compass – the Next Steps: No Single Left Behind” — and was opened by Agudah’s CEO Shia Markowitz. He introduced Compass Shidduch Network’s new director, Rabbi Yechiel Rhine, who sketched out his vision of what needs to be changed in the shidduch process. Rabbi Moshe Tuvia Lieff, Rav, Agudath Israel Bais Binyomin, noted that we have to remember we’re not in the driver’s seat when it comes to shidduchim, and Rabbi Benzion Kokis, Rav, Khal Zichron Mordechai, Monsey, discussed the problem he is seeing more of lately: Connections between couples are becoming shallow – both in dating and married couples – partly because technology is making communication both more prevalent and more impersonal and able to be misinterpreted.

Growing at the Convention

We beat ourselves up, we don’t give ourselves credit, we don’t take risks because we’re afraid to fail – but if we were given talents by Hashem, said Rabbi Doniel Staum, LCSW, Principal, Mesivta Ohr Naftoli, there’s a reason for that, and we have to make sure to use them. “No one will ever pay you what you’re worth. They’ll pay you what they think you’re worth, and that’s often based on how you present yourself.” His co-presenter, Alan Proctor, Regional Business Director, Madison Title Agency, in the session titled, “How to Make Friends and Influence People,” concurred. “Sometime one sentence can change the way we view something.”

When we discuss stories, the theme of this year’s convention, invariably stories of our greats come up. In a fascinating session called, “Stories of Gedolim: The Writer’s Perspective,” two veteran storytellers, Rabbi Yisroel Besser, Editor, Mishpacha Magazine, and Rabbi Shmuel Bloom, Agudah’s Executive Vice-President Emeritus, and author of the recently published, On the Shoulders of Giants, discussed some of the thoughts that go into writing about Gedolim. A recent example of a question that concerned Rabbi Besser was whether to include a mention of a personal difficulty in the life of someone he was profiling. Upon consultation with the family, they made it clear that their father would have wanted people to be inspired by his example, to realize that it’s possible to go beyond personal difficulties and to ultimately find success.

Some of the Torah sessions over the last two days of the convention included a Yarchei Kallah shiur b’inyanei Tefillah, delivered by Harav Yitzchak Lichtenstein, Rosh Yeshivah, Yeshiva Torah Vodaath, as well as a Yarchei Kallah shiur on the Halachic Aspects of Amirah L’akum, given by Rabbi Yerachmiel Fried, Rosh Kollel, Dallas Kollel-DATA.

But limud Torah as a hashkafic concept was also covered. The “lilmod” aspect was discussed in the “Ki Heim Chayeinu: Torah – The Elixir of Life” session, where Harav Yosef Ozeri, Rosh, Yeshivat Mekor Haim, and Rabbi Eliezer Gewirtzman, Member, Machon Chayim Aruchim, discussed the importance of learning. In Harav Ozeri’s words, “It’s an unfortunate misconception that a person could think, ‘I only learn two hours a day.’ We have to know that a baal habayis who learns is very chashuv in the eyes of Hashem.”

U’lelamed: The second half of the phrase was elaborated on in “Learning and Earning: Opportunities for Harbatzas HaTorah for Baalei Battim” was the intriguing title of a session which was chaired by veteran Maggid Shiur Yossi Gleiberman, and included speakers Harry Rothenberg, Esq., Partner, The Rothenberg Law Firm LLP, Barry Lebowitz, Portfolio Manager, Millenium, and Rabbi Mayer Zuckerman, LCSW.

But the biggest Torah topic discussed, was, of course, the upcoming Siyum HaShas.

A topic that was close to many speakers’ hearts was, unsurprisingly, the Siyum HaShas, which is happening one month from today. As Harav Elya Brudny, Rosh Yeshivah, Mirrer Yeshiva, and Chaver Moetzes Gedolei HaTorah, said in his keynote address on Motzoei Shabbos, “Hundreds of thousands of us will be shteiging because of the Siyum HaShas.” Harav Yaakov Perlow noted that same evening that Talmud Torah d’rabbim is being celebrated now in a way that was never celebrated before – something that the Agudah is very proud of, being the engine that is the driving force behind the Siyum HaShas.

The Siyum HaShas is having a ripple effect on people’s lives. Rabbi Yechiel Spero, author of the Touched by a Story series, told of a daf yomi participant who is delaying a medical procedure until after the Siyum HaShas to make sure that he doesn’t miss a single daf before the Siyum.