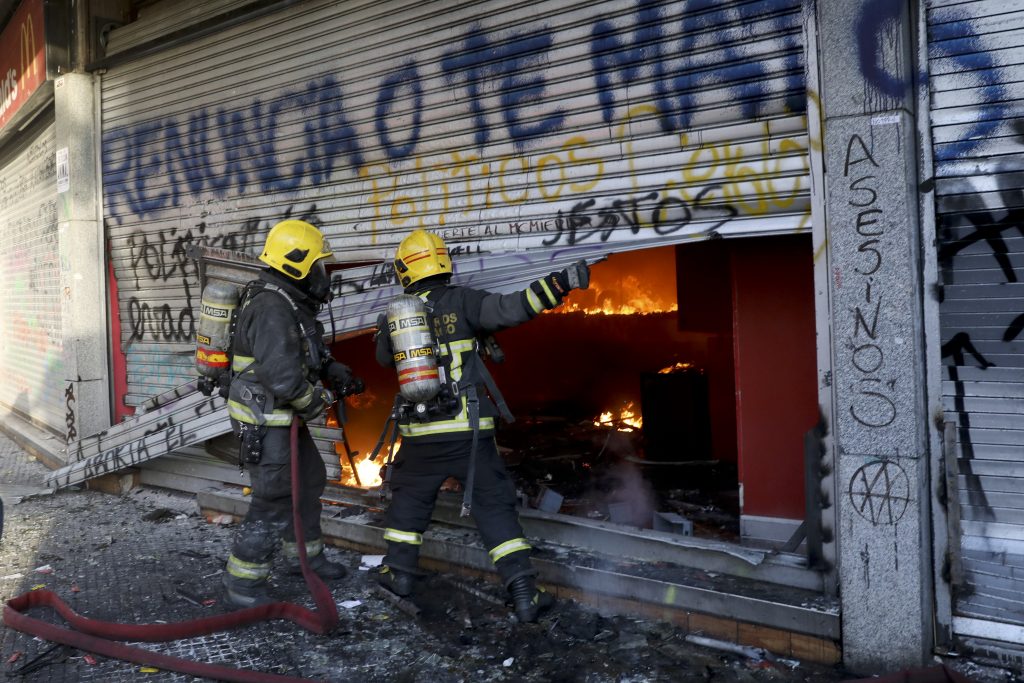 Fresh protests and attacks on businesses erupted in Chile Monday despite President Sebastián Piñera’s replacement of eight key Cabinet ministers with more centrist figures and his attempts to assure the country he has heard calls for greater equality and improved social services.
Thousands of protesters crowded again into central Santiago, and one group set fire to a building that houses a fast-food restaurant and stores. Firefighters were battling the blaze.

Other looters attacked a pharmacy, and there was an attempt to set a subway station on fire. Meanwhile, hundreds of thousands of people attempted to get home from work on free buses sent to replace trains out of service due to the burning of dozens of stations over the last week in Latin America’s most modern public transportation system.

By Monday evening, piles of detritus burned on street corners and some residents and business owners tried to extinguish blazes with handheld fire extinguishers. At least a couple dozen glass storefronts were smashed and graffiti cursing Piñera and calling for revolution was sprayed on virtually every building.

Piñera replaced the heads of the Interior, Treasury, Economy, Labor and four other Ministries with generally younger officials seen as more centrist and accessible.

“Chile has changed and the government must change,” Chile’s president said.

However, his government announced no policies Monday aimed at addressing 10 days of protests over deficient social services and the high cost of living in one of Latin America’s most prosperous and modern nations.

Protesters almost uniformly say they are frustrated with the so-called neoliberal model that has left Chile with region-topping prosperity along with a widely criticized private pension system, and two-tiered health and education systems that blend the public and private, with better results for the minority who can afford to pay.

Many Chileans talk of waiting a year for an appointment with a specialist, or families receiving calls to finally set up appointments for loved ones who died months earlier. Hundreds of thousands are hobbled by educational loans that can follow them into their 40s and even 50s.

“Last Friday we had a peaceful protest and being peaceful they didn’t listen to us,” said Sebastián, a 25-year-old welder who declined to give his last name, saying he feared the authorities. “You have to get their attention somehow.”

Adding to protesters’ anger was a military crackdown on demonstrations and looting that has left 1,132 hurt, with dozens partially blinded by police or soldiers’ gunshot pellets, according to the National Human Rights Institute and the Chilean College of Medicine. The death toll from the 10 days of violence stands at 20, although it is unclear how many were killed by police and how many by looters.

The U.N. High Commissioner on Human Rights, former Chilean President Michelle Bachelet, was sending a delegation to the country yesterday to investigate the situation. Amnesty International was also sending a team.

From afar, Chile has been a regional success story — under democratically elected presidents on the left and right, a free-market consensus has driven growth up, poverty down and won Chile the region’s highest score on the United Nations Human Development Index, a blend of life expectancy, education and national income per capita. In 2010 Chile became the second Latin member of the Organization for Economic Cooperation and Development, after Mexico.

Meanwhile, a 2017 UN report found that the richest 1% of the population earns 33 percent of the nation’s wealth. That helps make Chile the most unequal country in the OECD, slightly worse than Mexico. Piñera himself is a billionaire, one of the country’s richest men.