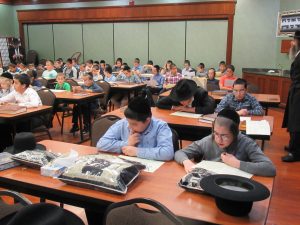 The Board of Regents is expected to vote soon on the Education Department’s guidelines for secular education at private schools.

As New York City Councilmembers representing hundreds of thousands of nonpublic school students, we have observed recent discussions about proposed substantial equivalency regulations with great interest. These suggested regulations include mandating a dozen courses to be taught in all private elementary schools, the length of time they must be taught in several grades, and requiring local school districts to evaluate all private school faculty.

On December 17, 2018, we sent a letter to then-Commissioner Elia noting our concerns with the guidelines released then. We write now to reiterate our displeasure with the State Education Department’s continued desire to upend the relationship between the State and nonpublic schools that has existed since 1894.

We continue to believe that it is integral that the State respects parents’ legal right to choose their children’s schools. New York City nonpublic schools have had immeasurable successes in educating their students and preparing them for life. Nonpublic school graduates have been accepted into and attended Ivy League schools for college and post-graduate educations, they’ve gone on to create multi-billion dollar businesses, and even hold high-profile elected and appointed positions in local and United States governmental bodies. These accomplishments speak volumes about the educational standard in nonpublic schools here in New York City.

It is our understanding that more than 140,000 parents, alumni, educators and supporters of nonpublic schools submitted letters to the NYS Department of Education to protest this proposal. These responses included statements of opposition from the New York State School Boards Association, the Council for American Private Education, the Commissioner’s Advisory Council for Religious and Independent Schools, and representatives of Jewish, Catholic, Muslim, and Independent schools.

The New York State School Boards Association, which speaks on behalf of more than 700 school districts statewide, stated in part, “We cannot support the proposed regulations in their current form…The specifics of the proposed regulatory provisions go beyond what has been historically recommended under the Department’s existing guidelines regarding substantial equivalency reviews. That concern is heightened by the embedded threat contained within the proposed regulations’ reference to the enforcement mechanism of Education Law §3234, which authorizes the commissioner to withhold state aid from districts that are found to be noncompliant with regulatory requirements.”

We urge you to reconsider these proposed guidelines, and additionally ask that you review the points made in the attached letter dated December 17, 2018, which still ring true under today’s circumstances. We look forward to your expeditious response to these concerns.