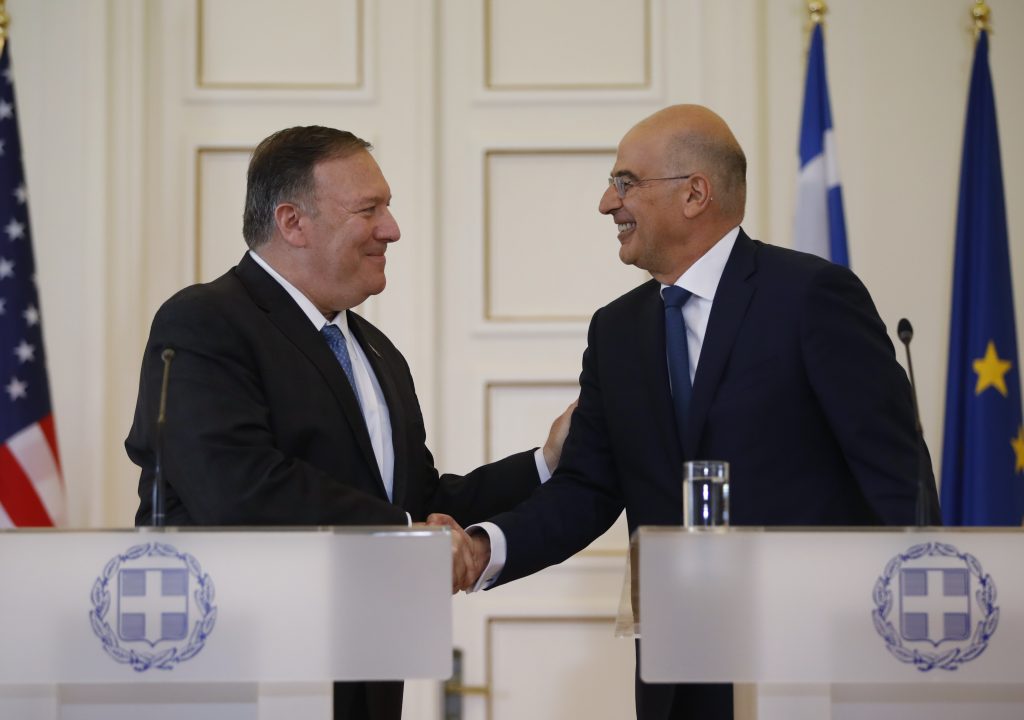 Secretary of State Mike Pompeo on Saturday defended the Trump administration’s approach to Ukraine, which is driving an impeachment inquiry in Congress, and called it typical of the transactional way countries deal with one another.

Pompeo said the focus from the media and commentators on President Donald Trump and Ukraine is “wrong” because it doesn’t “impact real people’s lives.”

“Instead they get caught up in some silly gotcha game,” he said, responding to a question from a Greek reporter after Pompeo delivered a speech on U.S.-Greece relations.

America’s top diplomat has backed the administration’s demand that Ukraine open inquiries into alleged corruption that could target former Vice President Joe Biden’s son Hunter and into possible interference in the 2016 presidential election. He called it reasonable, responsible and necessary to target graft, ensure aid is spent properly, and protect America’s democracy.

Lawmakers have made Trump’s request in July that Ukraine investigate the Bidens the centerpiece of an impeachment investigation. A whistleblower complaint said that Trump sought to use military assistance for Ukraine as leverage to push President Volodymyr Zelenskiy to investigate Biden, a top Democratic rival.

He strongly defended the administration’s campaign to get Ukraine’s president to agree to a corruption investigation in return for a trip to Washington and the release of military aid.

Supporters of the impeachment probe say the administration’s actions toward Ukraine raise the possibility that a president used the power of his office to get a foreign government to help him win re-election. House Speaker Nancy Pelosi, D-Calif., launched the formal inquiry last week, accusing the president of “betrayal of his oath of office,” betrayal of national security and betrayal of the integrity of American elections.

Asked whether Greece or other U.S. allies could expect similar political pressure from Washington, Pompeo said it was the normal way that governments deal with each one other.

“You’re going to come under enormous political pressure, let me assure you,” he said. “This is what we do. We work together in a political environment to achieve what the Greek people want. And America tries to advance its interests around the world.”

“When I talk to your foreign minister he pressures me all the time,” Pompeo said. “It is totally appropriate. Nations do this. Nations work together. They say, ‘Boy, goodness gracious, if you can help me with X, we’ll help you achieve Y.’ This is what partnerships do. It’s win-win.”

In Trump’s July telephone call with Ukraine’s president, Trump referred to a discredited conspiracy theory that aims to cast doubt on Russia’s role in the 2016 hacking of the Democratic National Committee and alleges that Ukraine had spread disinformation during the U.S. election.

Pompeo also said the State Department had responded to a congressional subpoena for him to produce Ukraine-related documents. He did not say what that response was. He had faced a Friday deadline to hand over the documents, but he suggested that he had not and would instead move to comply with the subpoena at his own pace.

“We’ll work through that process,” said Pompeo, a former congressman who was relentless in pursuing investigations into the attack on U.S. facilities in Benghazi, Libya, which occurred during the Obama administration.

“I remember precisely once when I was on that side and we were looking for documents, I remember precisely how long it took for those documents to come across. … We’re going to be more responsive than the Obama administration was in the years that preceded this particular Congress.”