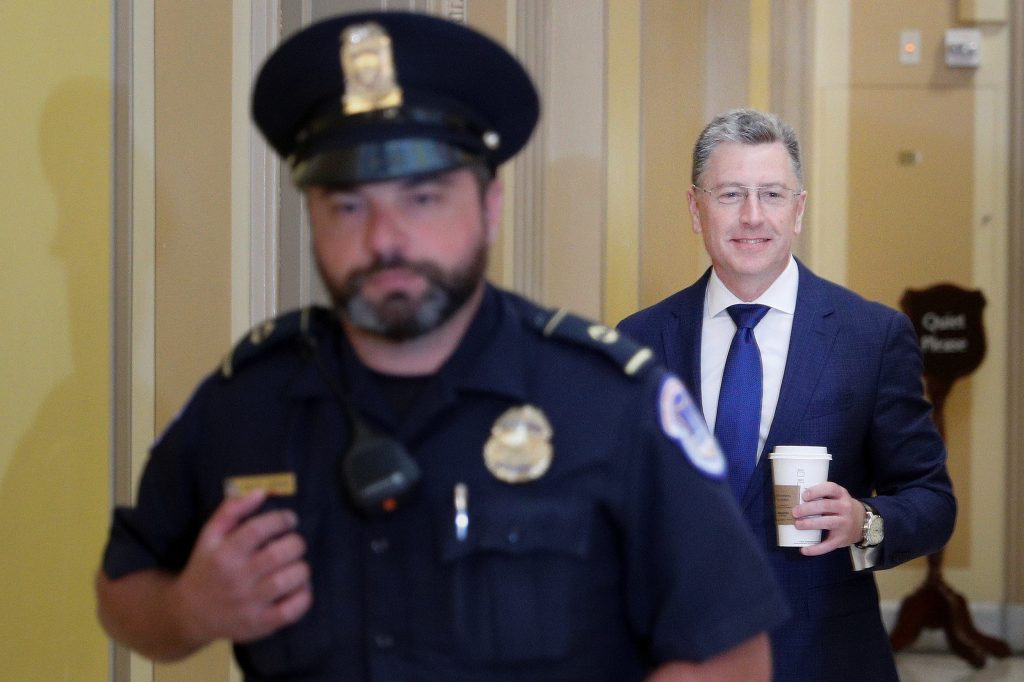 A longtime U.S. diplomat who served as President Donald Trump’s special envoy for Ukraine is to tell his story to congressional committee members on Thursday as part of a Democratic-led impeachment probe of the president.

Kurt Volker resigned as special representative for Ukraine negotiations on Friday, the day after the public release of a whistleblower complaint that described him as trying to “contain the damage” from efforts by Trump’s lawyer Rudy Giuliani to press Ukraine to investigate Democrats.

Volker’s meeting with the committee comes after an emotional day in the impeachment inquiry on Wednesday, when Trump railed at journalists during a news conference, resorted to the use of an expletive on Twitter and called the probe “a hoax and a fraud” while pledging to cooperate.

The impeachment probe has angered Trump, whose volatile presidency survived a two-year federal probe that found Russia intervened to help him win the White House in 2016.

“I think the president knows the argument that can be made against him. And he’s scared,” she said in an interview with the ABC.

Trump froze $400 million in U.S. aid to Ukraine shortly before he asked its president for the favor, prompting accusations he leveraged taxpayer funds for personal gain.

“Republicans in Congress must speak out against President Trump’s admitted abuse of power and stand up for Congress’s duty to conduct a full investigation,” the group, Republicans for the Rule of Law, said in a statement.

On Thursday, members of the House Foreign Affairs, Intelligence and Oversight committees will conduct a transcribed interview with Volker. The 54-year-old diplomat, who is also a former U.S. ambassador to NATO, is appearing voluntarily.

The briefing will take place behind closed doors, the first of a series of events in the probe, none of them public, scheduled within the next 10 days. More are expected.

He also expressed concern that U.S. Representative Eliot Engel, the Democratic House Foreign Affairs chairman, had ceded oversight of U.S. foreign policy to the Intelligence Committee because that panel, he said, would lead the questioning of Volker.

A Foreign Affairs Committee aide said the panel has not abdicated anything, but is supporting the intelligence committee that Pelosi designated to lead the impeachment inquiry.

On Friday, intelligence community Inspector General Michael Atkinson will testify at a closed Intelligence Committee hearing. Marie Yovanovitch, who was the U.S. ambassador in Kiev until Trump recalled her in May before her normal term was up, will meet with committee staff on Oct. 11.

Pelosi dismissed that characterization at a news conference on Wednesday, saying: “It’s not perfect – it’s wrong.”

In another development on Wednesday, staff from eight Senate and House congressional committees, including Republicans and Democrats, reacted with surprise after a briefing by the State Department’s inspector general, Steve Linick.

At the briefing, which was held behind closed doors but not classified, Linick handed out packets of documents that the only lawmaker who attended, Democratic Representative Jamie Raskin, described as “propaganda and disinformation.”

Committee staff members said it concerned a package of documents delivered to Secretary of State Mike Pompeo that included allegations against Biden and Yovanovitch.

A photograph of one document, whose source was not disclosed, described a discredited theory promoted by Trump allies that Yovanovitch was installed in her post by billionaire George Soros, a Democratic donor frequently attacked by far-right activists.

The impeachment probe could lead to approval of articles of impeachment – or formal charges – against Trump in the House. A trial on whether to remove Trump from office would then be held in the Republican-controlled Senate. Republicans, however, have shown little appetite for ousting him.