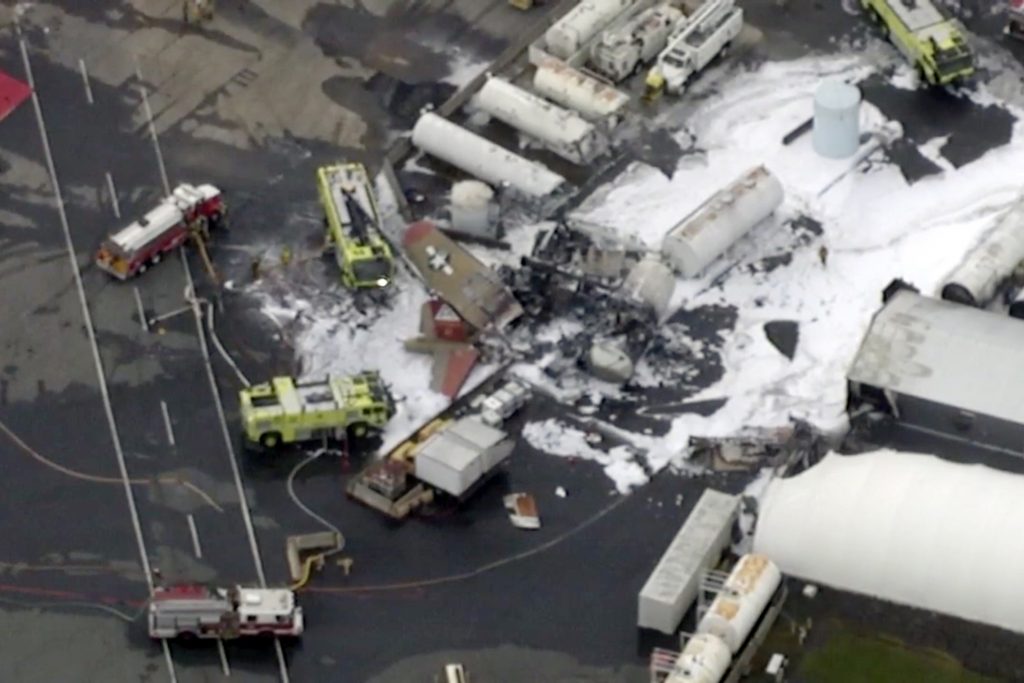 An airman with the Connecticut National Guard who was aboard a B-17 bomber that crashed at an airport helped other passengers escape the flames by using his fire-resistant gloves to open a hatch, officials said Thursday.

Seven people died when the plane with 13 people on board crashed, including an insurance analyst and a former police officer with an affinity for World War II history.

The airman has training in handling emergencies on aircraft and had brought his military-issued gloves on the flight, according to the Guard. The airman was treated at a hospital and has been recovering at home. His name was not released.

The plane crashed and burned after experiencing mechanical trouble on takeoff Wednesday morning from Bradley International Airport. Some of the survivors were critically injured.

Among those killed was Gary Mazzone, 60, of East Windsor, who was a history and military buff, according to his son, Daniel Mazzone. He didn’t know of his father’s plans to ride the B-17, he said, but knew why he would be interested.

“I think he just wanted to see what it was like to be in the back of a B-17,” Daniel Mazzone said. “He loved World War II. He loved people who served this country in any capacity.”

Mazzone, a father of three children and two stepdaughters, retired in January as a prosecutor’s office inspector and previously was a Vernon police officer for 22 years.

“We’re all very sad … and we’re very sad for his family,” Chief State’s Attorney Kevin Kane said. “He was a good investigator. He was a good inspector. And he was a very good and helpful colleague.”

The wife of Robert Riddell, an insurance company analyst from East Granby, said in a social media post that her husband was among those killed. Robert Riddell had posted a photo from inside the plane just before takeoff.

“Words cannot express how devastated I am. Rob was the best person I’ve ever known. … I will miss him beyond words can ever express. He loved his children more than anyone could know and the new grandson was the apple of his eye,” Debra Riddell wrote.

Jim Roberts, 48, of Ludlow, Massachusetts, was also among those killed, his brother Joe Roberts told MassLive.com .

Two firefighters from Simsbury were aboard the plane and are recovering, the fire department said.

Bridgeport Hospital officials said that one survivor who arrived in serious condition was upgraded Thursday to fair condition, and that two others there were still in fair condition. All three suffered burns and broken bones.

One patient injured in the crash remained at Hartford Hospital, officials said.

The names of the 10 passengers and three crew members aboard the plane have not been released officially.

The retired, civilian-registered plane was associated with the Collings Foundation, an educational group that brought its Wings of Freedom vintage aircraft display to the airport this week, officials said.

The vintage bomber – also known as a Flying Fortress, one of the most celebrated Allied planes of World War II – was used to take history buffs and aircraft enthusiasts on short flights, during which they could get up and walk around the loud and windy interior.

The National Transportation Safety Board sent a team to investigate.