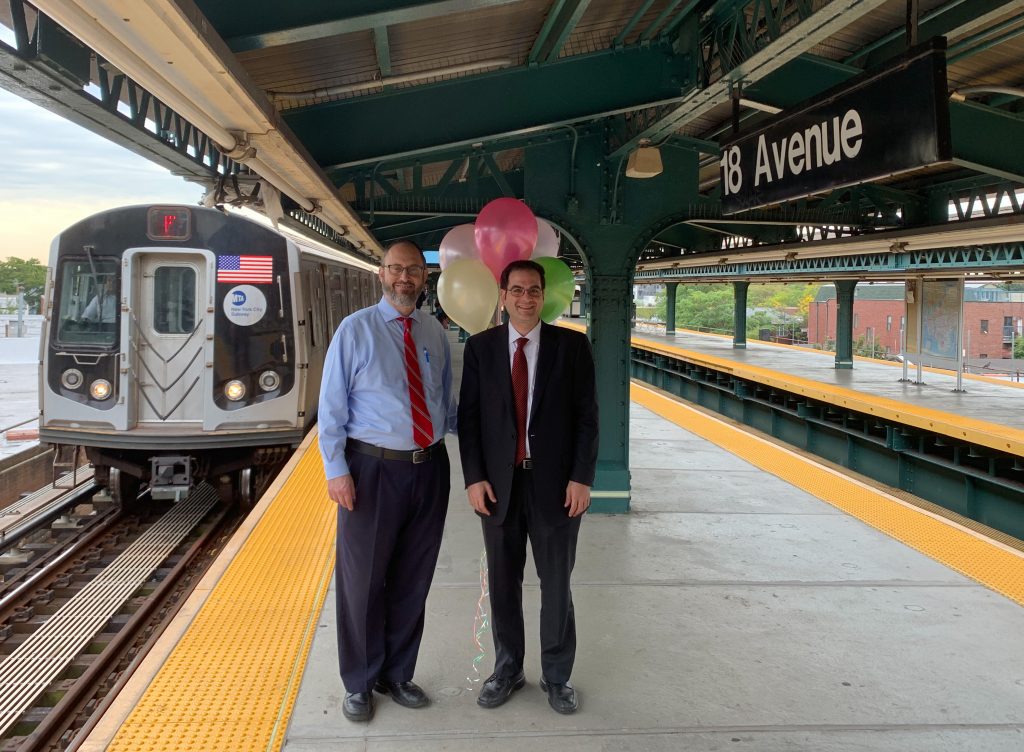 The Express F train has returned to Brooklyn after a long absence.

At 7:07 a.m. Monday, an F Train pulled out of the Coney Island-Stillwell Av Station, as countless trains do every day. But this train only made one stop (7 Av) between Church Av and Jay St-MetroTech, skipping a total of six stops, completing the trip from Coney Island to Jay Street in 34 minutes.

“This is a good start to finally bringing much needed transportation relief to our southern Brooklyn communities,” said Councilman Kalman Yeger. “I’m grateful to the MTA for beginning this expanded service.”

A previous iteration of F Express service was suspended in 1987 due to track work, but the service was not restored after the work was completed.

Following years of campaigning by politicians representing South Brooklyn neighborhoods with long commutes to Manhattan, limited express service returned to the line in the summer of 2016, but only briefly.

The elected officials welcomed the new service, but said they hoped it was only the start of further expansion of the F Express in particular and of transit options in general for their constituents.

“Anyone growing up on 18th Avenue, like I did, remembers when express service on the F line was the norm,” said state Senator Simcha Felder. “This is a step in the right direction and I look forward to the return of full-time F express service.”

“The F line has always been notoriously slow, with frequent service delays and interruptions,” said Councilman Chaim Deutsch. “The F Express gives a quicker option to straphangers, allowing them to get to and from work in a timely manner. I hope to see an increase in commuters using the F train, which in turn will reduce congestion.”

While residents and officials in South Brooklyn are celebrating the new service, it is opposed by those in the neighborhoods whose stops are skipped over.

At an MTA board meeting in July, Councilman Brad Lander, who represents Borough Park and Kensington, which benefit from the new service, as well as neighborhoods like Park Slope and Red Hook, where the skipped stops are located, expressed his displeasure with the plan.

“We would be delighted to see a real F express train, which would add service to the line, in order to shorten travel times for riders in southern Brooklyn … without reducing service for others,” said Lander. “The current proposal, however, adds no new train service. Instead, it simply eliminates service during rush hour at six local stations, some of the busiest and most used ones on the line, stations that already experience significant overcrowding.”

Assemblywoman Jo Anne Simon, who represents Park Slope and Carroll Gardens, said the MTA “should be adding service, not reducing service anywhere in the system.”

But supporters argue that it is reasonable to ask those who live closest to Manhattan to sometimes wait a bit longer for local trains, so that express service could be provided to those with longer commutes.