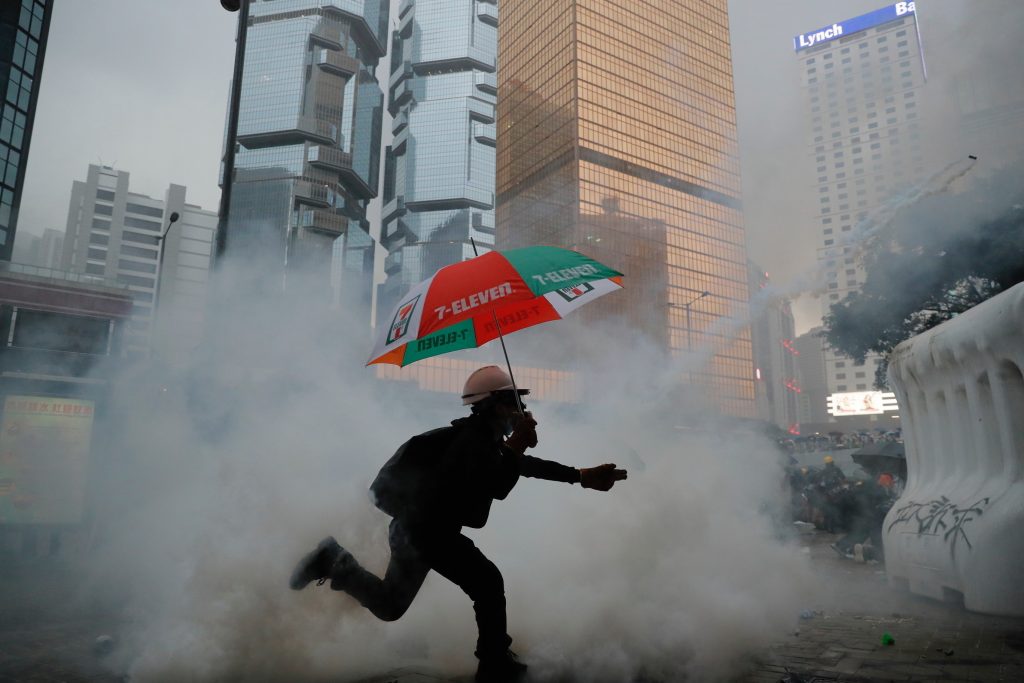 Interference by foreign parliaments in Hong Kong’s affairs is deeply regrettable, the leader of the Chinese-ruled city said on Tuesday, adding that an escalation of violence cannot solve social issues in the city.

The city’s Beijing-backed leader, Carrie Lam, was speaking after another weekend of sometimes violent clashes in the former British colony, with police firing tear gas in cat-and-mouse skirmishes with protesters who at times smashed windows and started fires in the streets.

“It’s extremely inappropriate for foreign parliaments to interfere in HKSAR internal affairs in any way, and [we] will not allow [the United States] to become a stakeholder in HKSAR matters,” Lam said, referring to Hong Kong by its status as a special administrative region of China.

During a rally at the U.S. Consulate on Sunday, thousands of demonstrators, some waving the American flag, called for help in bringing democracy to Hong Kong.

The protesters called for the U.S. Congress to pass legislation that would require Washington to make an annual assessment of whether Hong Kong was sufficiently autonomous from mainland China to retain special U.S. trade and economic benefits.

Hong Kong returned to Beijing in 1997 under a “one country, two systems” formula that guarantees freedoms not enjoyed on the mainland.

But many Hong Kong residents fear Beijing is steadily eroding that autonomy. China denies meddling in the city.

The initially peaceful protests have degenerated into encounters between baton-wielding riot police and activists, leading to scores of injuries and about 1,300 arrests.

The demonstrations have taken a toll on Hong Kong’s economy, which is on the verge of its first recession in a decade. Hong Kong visitor arrivals plunged nearly 40% in August from a year earlier as tourists steered clear of the city.

Stephen Schwarz, head of sovereign ratings for the Asia-Pacific region at Fitch Ratings, said the agency’s downgrade of Hong Kong last week reflected damage to the city’s reputation as a place to do business.

“The downgrade reflects months of [an] ongoing conflict environment, which are testing the ‘one country, two systems’ framework and which have inflicted damage on the international perception of the quality and effectiveness of Hong Kong’s governance and rule of law as well as the stability of its business environment,” Schwarz said.

Chinese officials have accused foreign forces of trying to hurt Beijing by creating chaos in Hong Kong, and they have warned outsiders to keep out of what they call an internal affair.

On Monday, former U.S. Defense Secretary Jim Mattis said the anti-government protests were not an internal Chinese matter and the United States should offer at least moral support to the demonstrators.

After three months of unrest, Lam last week withdrew a controversial extradition bill that had triggered the unrest, but the gesture failed to appease many demonstrators.

Anger over the now-shelved extradition bill has triggered opposition to Beijing that had waned after 2014, when authorities faced down 79 days of pro-democracy protests in the central business district.

Now, three months of protests have evolved into a broader backlash against the government with demands for democracy re-emerging as a rallying cry.

“Escalation and continuation of violence cannot solve the issues faced by our society now,” she told a news conference.

“It will only deepen the conflict, contradiction, splits, and even hatred in society.”

The protests, beamed live to the world since June, have prompted some of the city’s powerful tycoons to appeal for calm.

In his first speech mentioning the unrest, billionaire Li Ka-shing urged political leaders to offer young people an olive branch, calling them “masters of our future,” according to an online video of remarks to a small crowd on Sunday.

Lam said her administration’s actions, including the bill’s formal withdrawal, were “not directly to stop these protests and violence.”

“It is really to express my sincerity to start a dialogue with the people,” she said.