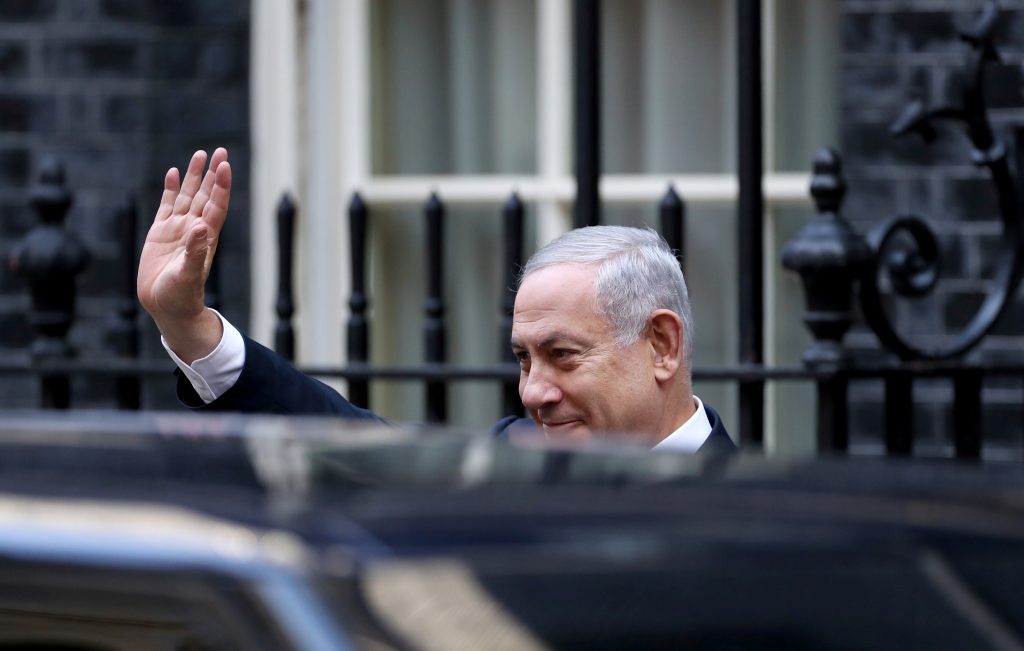 Prime Minister Binyamin Netanyahu might have thought that the brevity of his trip to London to see British Prime Minister Boris Johnson on Thursday was a selling point—the PM jetting around the world to promote the nation’s interests—but Blue and White party leader MK Benny Gantz wasn’t buying.

What was described by the Netanyahu’s office as a “snap visit” amounted to about 30 minutes at 10 Downing Street. They talked about holding the line on Iran, and when Johnson offered that “Of course the U.K. is still supporting all efforts to reach a solution to the Middle East peace process and a two-state solution,” his Israeli counterpart replied circumspectly, “Well, I’d like to talk to you about that too.” Netanyahu is on record favoring a two-state solution, but during the election campaign the emphasis has been on extending Israeli sovereignty to Yehudah and Shomron.

Gantz derided the quick trip, saying, “Netanyahu’s travels, running from place to place, are throwing dust in the eyes of people,” referring also to a recent meeting with Russian President Putin in Moscow and a trip to India that was cancelled at the last minute this week.

“I suggest that [Netanyahu] — instead of going to London — go to Kiryat Shemonah where the people bore him,” Gantz continued, referring to an incident last October when Netanyahu told a woman who heckled him in the northern border town that she was “boring.”

Senior Likud MK Gideon Sa’ar, answering Gantz at the same event, said: “This is such impudence. I remember when we were in the opposition we had a rule – we didn’t attack the prime minister when he was on a political mission abroad.”

“The prime minister is on a mission – he’s not shopping. He’s sitting with the British prime minister who was elected recently and is one of Israel’s greatest friends and discussing the most important topics about Israeli security. Gantz is well aware of which topics are discussed at meetings of this type and if he chooses to attack – that means he has no red lines. It was an attack solely for the sake of attack – disrespectful and inappropriate.”

Later on Thursday, Netanyahu met with British Secretary of State for Defense Ben Wallace and U.S. Secretary of Defense Mark Esper “to discuss matters of national security,” the Israeli Embassy in London said.

The latter meeting garnered less publicity, but it could just as well be that it was the real reason for the trip. In any case, no details were given to the press.