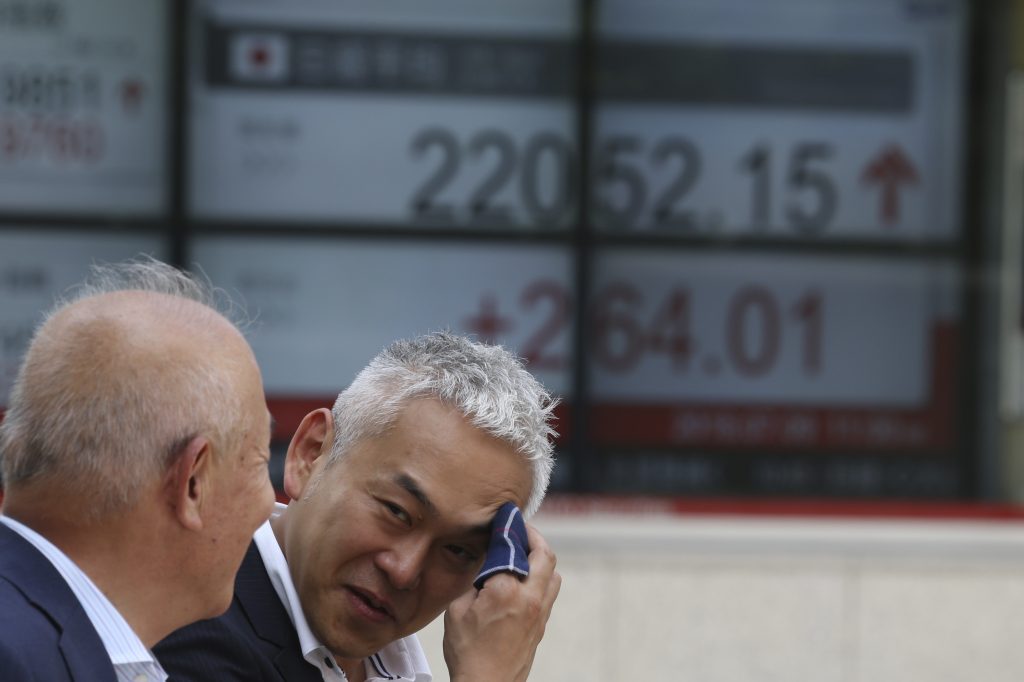 Global stocks dropped on Tuesday, hurt by U.S.-China trade frictions, while the British pound fell to its lowest since January 2017 amid political uncertainty as Prime Minister Boris Johnson tried to stymie lawmakers’ efforts to stop a no-deal Brexit.

European shares are expected to dip, with pan-European Euro Stoxx 50 futures down 0.09%.

In an escalation of their trade war, the United States on Sunday began imposing 15% tariffs on a variety of Chinese goods, and China began imposing new duties on U.S. crude oil.

Although U.S. President Donald Trump has said both sides would still meet for talks later this month, tensions show little sign of abating.

China said on Monday it lodged a complaint against the United States at the World Trade Organization over U.S. import duties, trashing the latest tariff actions as violating the consensus reached by leaders of China and the United States in a meeting in Osaka.

“We have so many problems around the world, starting from the U.S.-China trade war and Brexit. But investors appear to be getting used to be[ing] exposed to them,” said Hiroyuki Ueno, senior strategist at Sumitomo Mitsui Trust Asset Management

“No one really thinks Washington and Beijing will solve the issues. But as long as the U.S. economy keeps going, stock prices will have limited downside,” he said.

U.S. manufacturing survey by the Institute for Supply Management (ISM) due at 1400 GMT Tuesday is a major focus for investors.

Although U.S. manufacturing activity has been slowing in recent months, the ISM’s index has so far stayed above 50, pointing to growth in the sector.

U.S. bond yields rose a tad on profit-taking after a market holiday in the United States on Monday.

Prime Minister Johnson implicitly warned lawmakers on Monday that he would seek an election on Oct 14 if they tied his hands on Brexit, ruling out ever countenancing a further delay to Britain’s departure from the European Union.

On Tuesday, lawmakers will decide whether to move Britain one step closer to a snap election when they vote on the first stage of their plan to block Johnson from pursuing a no-deal Brexit.

“Depending on further developments in U.K. politics, the pound could see sharp moves in the coming week or two. We think it could fall to as low as $1.13 this month,” said Sumino Kamei, senior currency strategist at MUFG Bank.

Uncertainties over Brexit have already hit the UK economy, with a survey by the IHS Markit/CIPS showing British manufacturing contracted last month at the fastest rate in seven years.

The picture is not much better in Europe, and the European Central Bank is widely expected to cut interest rates further into negative levels next week to cushion the blow, pressuring the euro.

The offshore Chinese yuan dropped to a record low of 7.1975 per dollar on Tuesday morning while the Australian dollar traded down 0.15% at $0.6705, cutting some losses after the Reserve Bank of Australia kept interest rates on hold.

Still, the Aussie stayed within a stone’s throw from a decade-low of $0.66775 hit last month.

Argentine bond prices fell to record lows on Monday and the official and black market pesos diverged after the country imposed capital controls in a bid to stem a currency rout that is sharpening the risk of default. The peso closed 0.88% stronger in official markets, but closed 0.79% weaker in the black market at 63.5 per dollar.