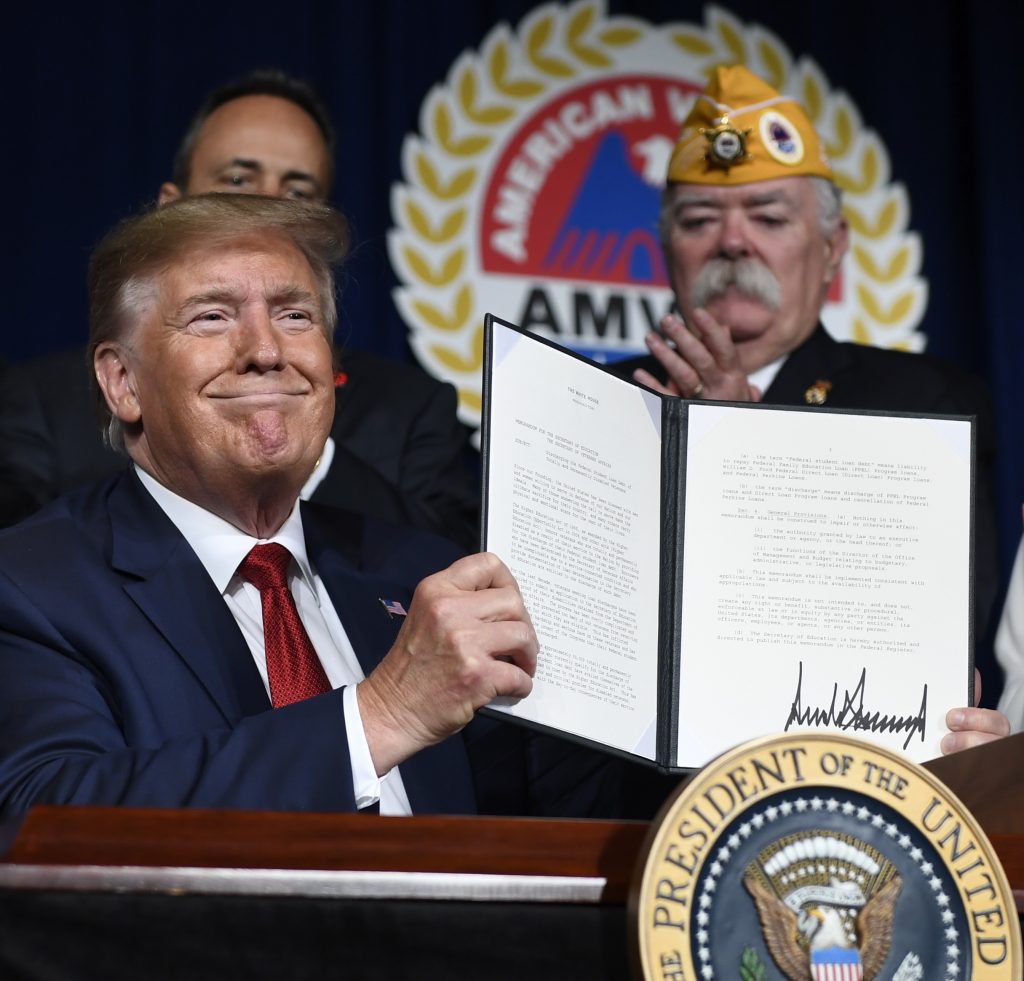 President Donald Trump repeated his nationalist call to always put “America First” and praised the might of the U.S. military Wednesday as he claimed to be doing more to help veterans than previous presidents.

Trump said his administration will now forgive federal student loan debt for permanently disabled veterans, a new benefit on top of changes in access to medical care for which the president takes outsize credit.

“We are reawakening American confidence and American pride,” Trump said at the annual AMVETS convention, where many in the crowd of about 2,500 wore hats, badges and other insignia from their home organizations.

“No longer will we sacrifice America’s interest to any foreign power,” the president said.

Many in the audience were veterans of overseas conflicts.

“If our enemies should dare to fight us, they will be crushed with overwhelming American might,” Trump said. “No adversary stands a chance against the awesome power of the red, white and blue. There is no military even close to ours.”

Veterans are an important political constituency for Trump, who portrays himself as a vigorous friend to the military and an advocate for veterans.

The crowd laughed and cheered for a warm-up joke Wednesday that appeared to back Trump’s reelection, although AMVETS does not issue endorsements.

Trump is the first president to address the organization’s annual convention.

“This is not a campaign speech. So I will not say, ‘Keep America Great,’ but we’re going to keep America great,” Trump said to laughter.

Quoting the famed Army general Douglas MacArthur, he told the crowd, “In war, there is no substitute for victory.

“We have an armed forces that’s unparalleled, and to achieve victory, there is no substitute for the unmatched character and courage of those who proudly wear the nation’s uniform,” he said.

A Pew Research Center survey of veterans in May found 57% approved of how Trump has handled his duties as commander in chief of the military, and 41% disapproved, a flip from the public overall, among whom 57% disapproved and 41% approved.

Ken Wolford of Orrtanna, Pennsylvania, a past national commander of AMVETS, said he is glad Trump came to address the organization’s 75th anniversary.

“I think he’s done a lot for the military, and for the veterans,” Wolford said, citing access to medical care among Trump’s priorities.

“We want to hear good things about what’s going on in the country,” such as tax cuts. “We don’t want to hear any politics, which I hope he didn’t bring any with him. This is for the veterans.”

Trump invoked politics, at least by implication, in claiming a better record for veterans than former president Barack Obama.

“After years of neglect, we are fixing the heartbreaking failures from the last administration at the Department of Veterans Affairs. America must never abandon our heroes in their hour of need,” Trump said.

“You don’t wait anymore. You go out and see a private doctor,” Trump said. “Veterans Choice. They’ve been trying to get that for 44 years,” prior to his administration, he said.

The VA Choice bill was mostly an update of a law signed by Obama in 2014 to allow veterans to see doctors outside the government-run VA system at taxpayer expense.

Trump did expand access to the program this year. The Mission Act signed by Trump took effect on June 6, and allows veterans to see private health-care providers if they live more than 30 minutes from a VA clinic or face wait times of more than 20 days for most health-care appointments.

In April, before the new law took effect, the Government Accountability Office found that the “VA cannot systematically monitor the timeliness of veterans’ access to Choice Program care because it lacks complete, reliable data to do so.”