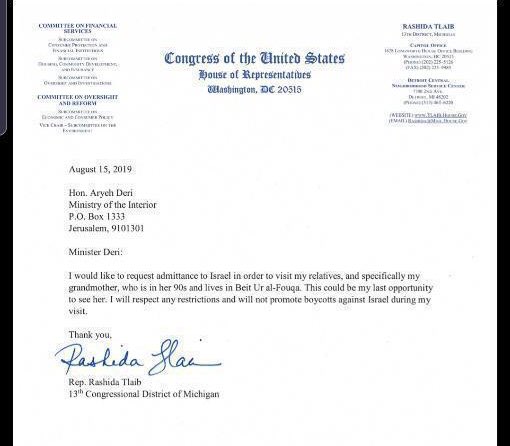 The Interior Ministry announced Friday that it has decided to approve a petition by U.S. Congresswoman Rashida Tlaib to enter Israel on ‘humanitarian grounds’ so she may visit her Palestinian grandmother, after she was banned from entering the country Thursday due to her support for the BDS movement.

In a letter she sent to Interior Minister Rabbi Aryeh Deri, Tlaib wrote that she is requesting approval to visit Israel “in order to visit relatives, especially my grandmother who is in her 90s, and lives in Beit Ur al-Fauqa.

“This could be my last opportunity to see her. I will respect any restrictions and will not promote boycotts against Israel during my visit,” continued the letter.

Strategic Affairs Minister Gilad Erdan said in a Twitter message that “the decision to keep the congressional representatives out was justified after a review of their planned itinerary showed that the goal of their visit was to continue supporting and promoting a boycott of Israel.”

However, Erdan noted, “Rep. Tlaib’s request to visit her grandmother should be approved. Especially in light of her commitment to respect Israeli law and not promote boycotts against us [while here].”

Prime Minister Binyamin Netanyahu had said Thursday that if Tlaib submitted a request to visit family on humanitarian grounds, Israel would consider it as long as she promised not to promote a boycott against Israel.