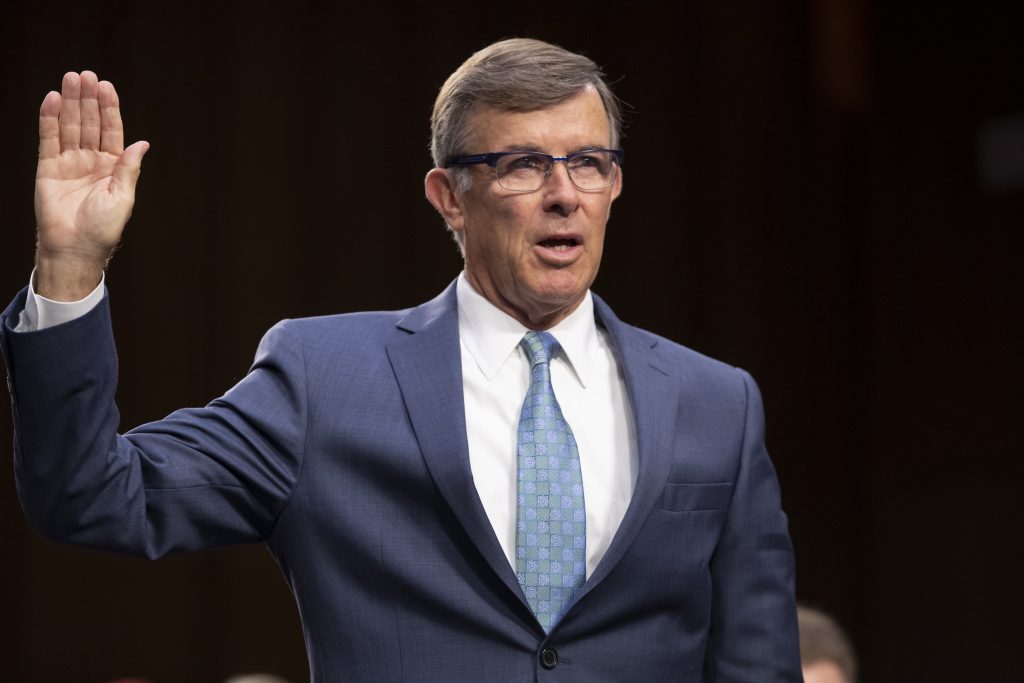 “Admiral Maguire has a long and distinguished career in the military, retiring from the U.S. Navy in 2010,” Trump tweeted. “He commanded at every level, including the Naval Special Warfare Command. He has also served as a National Security Fellow at Harvard University. I have no doubt he will do a great job!”

Coats also praised Maguire, saying in a statement that he “has had a long, distinguished career” and will lead the intelligence community with distinction.

It’s unclear if Trump, who has had an uneven relationship with the intelligence agencies since he took office, plans to also nominate Maguire to formally replace Coats.

After Coats announced his retirement late last month, the president nominated Texas GOP Rep. John Ratcliffe to be the new director of National Intelligence. But Ratcliffe removed himself from consideration after just five days amid criticism about his lack of intelligence experience and qualifications for the job.

The Office of the Director of National Intelligence has been in upheaval since Coats, who had bumped elbows with Trump, announced late last month that he was stepping down as of Aug. 15. Then on Thursday, Gordon, who has worked in the intelligence field for three decades, announced she was leaving the same day with Coats.

“Sue Gordon is a great professional with a long and distinguished career,” Trump tweeted Thursday. “I have gotten to know Sue over the past 2 years and have developed great respect for her. Sue has announced she will be leaving on August 15.

But it was clear that Gordon was not resigning by choice.

“I offer this letter as an act of respect and patriotism, not preference,” Gordon wrote in a note to Trump that accompanied her two-paragraph resignation letter. “You should have your team. Godspeed, Sue.”

A person familiar with the personnel decisions said Gordon spoke to Trump twice in the past week. The individual was not authorized to publicly discuss the decision and spoke only on condition of anonymity.

Gordon thanked the president for the opportunity to serve the nation as deputy national intelligence director for two years. She said she would resign effective Aug. 15 and would subsequently retire from federal service.

She said she was confident in what the U.S. intelligence agencies had accomplished and what they were poised to do going forward. “I have seen it in action first-hand for more than 30 years,” her resignation letter said. “Know that our people are our strength and they will never fail you or the nation. You are in good hands.”

After Coats announced his resignation, Rep. Adam Schiff, chairman of the House Intelligence Committee, urged Trump to promote Gordon. He cited U.S. law that requires that Gordon be elevated once Coats stepped down.

Schiff, D-Calif., said if Trump tried to bypass Gordon, it would be evidence of his intent to politicize the intelligence agencies to serve his “partisan aims and an attempt to do an end run around the legally mandated succession.”

Senate Intelligence Committee Chairman Richard Burr, R-N.C., called Gordon’s departure a “significant loss” and said she had been a “stalwart partner” to the intelligence panel. But he also praised Maguire, who he said he has known for some time. “I have confidence in his ability to step into this critical role,” Burr said.

Maguire retired from the navy after 36 years of military service. Before retiring, he was deputy director for operational planning at the National Counterterrorism Center. Trump nominated Maguire, a leader in the U.S. Navy Seal community, as director of the center in June 2018 and he was confirmed by the Senate in December 2018.