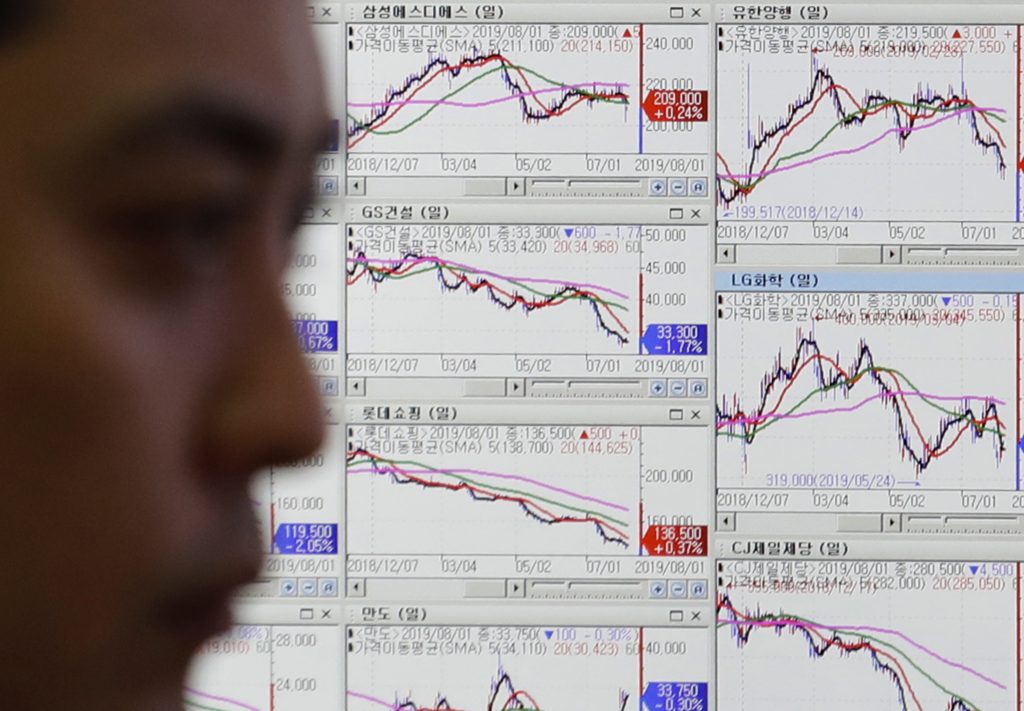 Asian shares slipped to six-week lows on Thursday while the dollar jumped to two-year highs as the U.S. Federal Reserve rattled markets by signaling that its first rate cut in more than a decade was not the start of a lengthy easing cycle.

Investors were pricing in more than 100 basis points of easing from the Fed over the next year, sending world equities soaring to record highs in recent days. But Fed Chair Jerome Powell dented those bets, sounding far more circumspect about the need for further policy easing.

In early European deals, the pan-region Euro Stoxx 50 futures fell 0.5% while futures for Germany’s DAX and London’s FTSE were down 0.3% each and those of France’s CAC 40 eased 0.2%.

MSCI’s broadest index of Asia-Pacific shares outside Japan faltered 0.8%, extending losses for a fifth day to the lowest since mid-June and on track for the biggest one-day percentage drop in a month.

Japan’s Nikkei reversed early declines and were a shade higher, while Australian shares declined 0.4%. Losses in Chinese shares accelerated after they opened lower with the blue-chip index down 0.8%.

World shares recoiled overnight following remarks from Powell that Wednesday’s 25-basis-point easing was “not the beginning of a long series of rate cuts.”

Powell characterized the rate cut as “a mid-cycle adjustment to policy,” citing signs of a global slowdown, simmering U.S. trade tensions and a desire to boost too-low inflation. Markets took that as a sign that the Fed will be cautious in making further cuts.

Riskier assets such as shares have had a golden run in the past decade as global central banks have kept monetary policies stimulatory, world growth has been strong and corporate profits have surged. But since the middle of last year trade disputes have become a major worry for policymakers as factory activity stuttered, while business investment and profits faltered in a blow to the global economy.

“We believe the Fed is trying to thread the needle, balancing market jitters about slowing global growth with robust consumer spending and a strong job market in the U.S.,” said Nick Maroutsos, co-head of global bonds at Janus Henderson.

“In other words, by cutting just 25 bps, the Fed is trying to bolster market confidence while also keeping some dry powder in reserve in case of an economic shock.”

Adding to worries, the United States and China on Wednesday ended a brief round of trade talks without much progress in ending their year-long tariff war.

South Korea’s exports tumbled for an eighth straight month in July amid persistently weak global demand and an escalating dispute with Japan, while its new export orders shrank the most in about six years.

South Korea, the world’s sixth-largest exporter, is the first major industrial economy to release trade data each month, providing an early assessment on the health of global demand.

“The broader global trade dynamic remains a challenge,” Morgan Stanley strategist Michael Zezas said. “Trade should continue to drag on corporate confidence, capex and global growth in the near term.”

U.S. Treasuries were sold off as investors scaled back expectations for at least 100 basis points of easing in the near term. Yields on 10-year notes climbed as high as 2.053% in early Asian hours from a U.S. close of 2.007%.

In foreign exchange markets, the dollar enjoyed a broad-based rally against major currencies, including the euro and Antipodean currencies on expectations monetary policies in Europe, Australia and New Zealand will remain accommodative.

The dollar index against a basket of six major currencies finished July 2.5% higher and was last up 0.4% at 98.899. Against the Japanese yen, the dollar broke above 109 to jump to the highest since end-May.

The kiwi hit a six-week trough of $0.6535 as markets wager on a rate cut by the Reserve Bank of New Zealand next week.

Spot gold made a new two-week trough on Thursday after falling to 1,405.26.