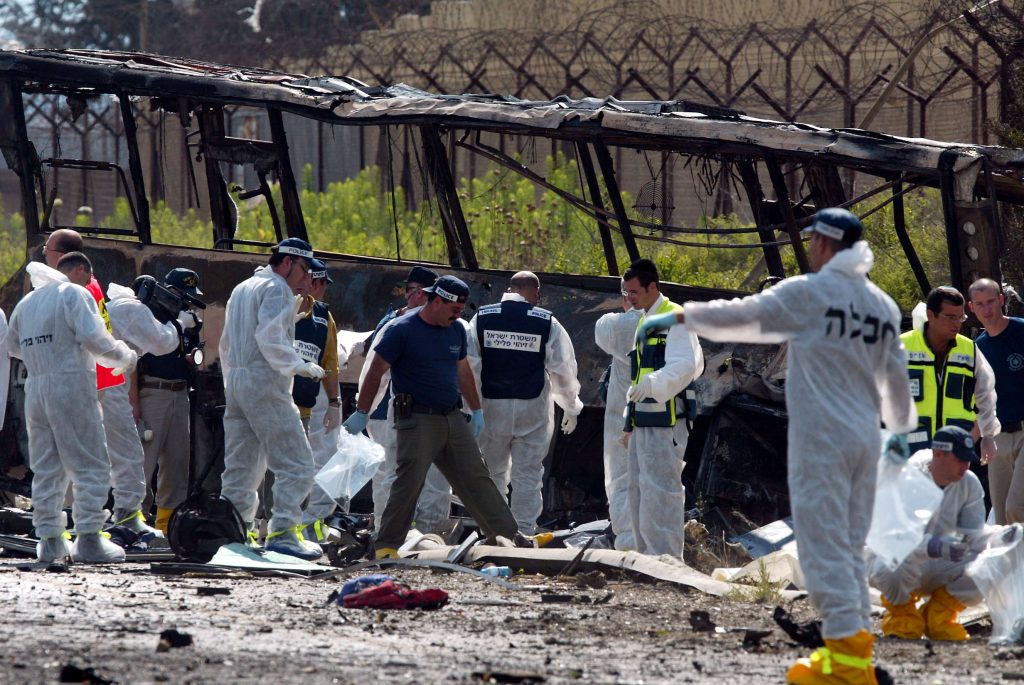 The Palestinian Authority organized and was responsible for terror attacks during the Second Intifada – and must pay victims who suffered damages and losses due to those attacks, a Yerushalayim court ruled Monday. The decision was handed down by the Yerushalayim District Court, a full 20 years after a civil lawsuit demanding compensation was filed in Israeli courts.

The decision holds the PA directly responsible for 17 terror attacks, with either its own personnel or that of the Palestine Liberation Organization – which was the parent political movement of the PA – carrying out attacks. The PA was ordered to pay victims of the attacks settlements amounting to more than a billion shekels. The specific amounts due each victim or their families will be determined at a later date.

The lawsuit encompassed a range of cases, chief among them a demand for compensation by the family of reserve IDF soldier Vadim Norzhich, Hy”d, who was murdered in the infamous Ramallah lynch of October 2000, with the iconic image of one of his murderers proudly showing off his bloody hands at a window. Other cases included the murders of four members of the Gavish family of Elon Moreh on Pesach 2002; the murder of three members of the Dickstein family, who were killed when Arabs ambushed them as they rode in their vehicle in the Chevron Hills; the June 2002 Megiddo Junction terror attack, in which a terrorist exploded a car bomb next to the fuel tank of an Egged bus, killing 17 people; and many more.

The case was actively adjudicated during the period it was in the courts, and has resulted in numerous legal landmarks – among them the fact that the PA is not a sovereign country, and as such is subject to lawsuits in Israeli courts, and not just international forums. There have also been intermediate rulings; the court several years ago ruled in favor of the Norzhich family, and the state withheld NIS 64 million that was due the PA in order to fulfill the judgement.

The case was led by attorney Nitzana Darshan-Leitner, head of the Shurat Hadin Israel Law Center. Darshan-Leitner has led numerous innovative and precedent-setting legal challenges against Arab terrorists. In September 2018, she led a group of Israeli farmers from the Gaza border area to file a petition with the International Court of Justice at the Hague against Hamas. The petition charges Hamas with terrorism and demands compensation for losses due to the ongoing kite and balloon terror attacks. The petition is to be filed as a class-action lawsuit, demanding compensation on behalf of some 50,000 residents and farmers in the Gaza border area who have been affected by the terror attacks. As the petition is filed inside the court, farmers will hold a special display outside the building, illustrating the damage caused by the Hamas-initiated fires. The petition specifically charged Hamas with violations of the Rome Convention, which prohibits involving or using a civilian population as a means of making war. Most of the balloons and kites are released by civilians, working under the direction of Hamas.

In 2017, she, along with American attorney Robert Tolchin, sued top Palestinian Authority terrorist Jibril Rajoub for $250 million when he visited the U.S. on behalf of the family of Azzam Rahim, a Palestinian Authority resident whom his family said was tortured and murdered by the PA in 1995 – under the direct command of Rajoub.

The lawsuit was filed by the family of Rahim, now living in Texas. The lawsuit relates to the arrest and torture of Rahim on charges that he acted in a “traitorous” manner against the PA. Rahim was arrested and locked up in a PA jail, with his family unable to secure his release and with no charges filed. Several days later, an ambulance dropped his dead body off at his family’s house. An autopsy revealed that Rahim had been severely tortured, and that the torture was directly responsible for his death. Rajoub, who was head of the PA’s security services at the time, was the only PA official who had the authority to permit or stop such torture, the lawsuit claims.

In a statement Monday, Darshan-Leitner said that the Israeli court’s decision was “a historic victory. These were among the first lawsuits filed against the PA, and they had no precedent. Our original claim was that the PA is a terror organization, and indeed the court found it responsible for terror attacks, sponsored by the Authority and carried out by the PLO, Hamas and Islamic Jihad. This proves that the intifada was not a ‘grass roots movement for freedom,’ but a war against the Israeli civilian population. What Yasser Arafat could not achieve in the Oslo Accords he sought to achieve with suicide terror attacks. The Palestinians’ cause has been genocide of Israeli Jews, and now it is going to pay for that.”