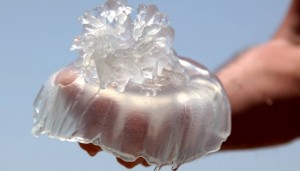 One of the pleasures of the hot Israeli summer is a day at the beach – but swimmers this summer would perhaps be better off if they sought out their local swimming pools. According to officials, this year’s jellyfish “plague” is likely to be fiercer – and longer – than usual.

That’s due to what Environment Ministry officials have termed a “giant swarm” of jellyfish that are headed straight for Israel’s shores. The swarm is significantly larger than the ones that usually visit the waters off Israel’s coast at this time of year. Jellyfish usually make their first appearance in the middle or end of June, usually dissipating by Tishah B’Av – but this year, the creatures are late, and the fact that there are many more of them means that they will probably hang around longer than usual, as well.

There have been reports of some jellyfish sightings already, but the main swarm is due only next week – giving beachgoers a few days to enjoy themselves before doing so becomes very difficult. While the jellyfish that reach Israeli shores are generally not poisonous, they do emit irritants that make swimming very uncomfortable. Last year, there were fewer jellyfish than anticipated, and the “season” lasted for just two weeks, instead of the usual month.

IDF Probe: No Connection Between Soldiers and Palestinian Boy’s Death